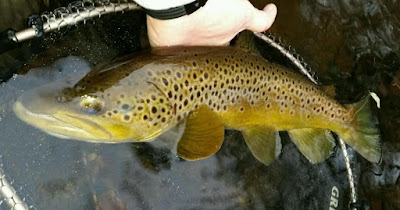 Andy Lyons caught this 20" plus wild Farmington River brown trout recently, what a perfect specimen of a trout. Despite 3 straight months on low water, we are still fishing well. Just focus on the spots with some depth & current, and skip the shallow stretches. Anywhere you find deeper water, you will probably find fish. FYI, for everything but streamers, think about using a longer leader to up your stealth & catch rate.  The release from the dam the past week has stayed at 50cfs, but rain has kept some water in the Still River, and we've been averaging 80-90cfs in the permanent Catch & Release (C&R). Riverton has been the best section for numbers of fish (multiple stockings there over the past 2 months), but the bigger browns have been coming more from the permanent C&R and below it. Currently the Farmington remains lower than normal- USGS Riverton gauge is reading 55cfs, with an additional 24cfs from the Still River, giving us just under 80cfs in the permanent TMA/C&R in Pleasant Valley/New Hartford. Look for water temps to average in the 50's, depending upon weather, time of day, and distance from dam. Just shy of 50 degrees for a high today, and then mid 50's to mid 60's through Friday, with rain in the Thursday forecast (yeah!).

We've gone to Winter hours starting today, we will be open 8am-5pm 7 days a week, including weekends.

Fishing remains good overall for many, albeit "technical" at moments, with fish coming to a mix of nymphs, dries, streamers and wets/soft-hackles. Blue Winged Olives (BWOs) are becoming the main glamour hatch, typically popping around 2pm or so, averaging a #24, with some even smaller. Still some Isonychia #12-14, Tan Caddis #16-18, and a few giant October Caddis #10-12. Make sure to have Rusty Spinners #20-24 for late in the day  Small nymphs #16-22 remain the most consistent producer (Caddis pupa, Quasimodo Pheasant Tails, Zebra Midges, Olive nymphs, attractors (Rainbow Warrior, Yellow Prince, etc.), and Egg flies. Also Stonefly nymphs in #8-14 (brown, golden/yellow, black). Streamers are a great fall choice, try especially olive, yellow, black, and white. With the low water, consider going smaller on your streamers if you want to catch numbers, or go bigger and shoot for a trophy, but expect to catch less fish. To really up your odds, try trailing a nymph, wet fly or soft-hackle about 18" behind your streamer (tie tippet to the hook bend on the streamer). Various wets & soft-hackles are producing, particularly upstream in Riverton.

The FRAA stocked the upper river on 10/6 with 1,200 Brook Trout & Rainbows. Brookies averaged a foot, with the Rainbow Trout running 12-14". The trout were stocked in the section from a little below the dam in Riverton, down to about Whittemore Pool. They've been responding well to a variety of dry flies, wet flies/soft-hackles, and assorted nymphs. The upper river was also stocked by the state with 2,000 trout (mostly browns) for Labor Day from the Goodwin Dam/Hogback in Riverton, downstream to Whittemore Pool at the northernmost point of Peoples State Forest. On Monday 9/26 the state stocked downriver in Collinsville/Unionville.

Trout are more aggressive on streamers in the fall, albeit you may want to downsize them due to the low water conditions- we have Woolly Buggers in stock down to #12-14. Or swing for the fences and use a bigger streamer, and expect to catch larger but less fish. Prime-time for streamers is low-light conditions: mornings, eves, overcast days, and when it rains and the water discolors. Except for the biggest dries, keeep your tippets light, in the 6x-7x range, and nymph with 5x-6x tippet.

If you like our fishing report, please consider buying your gear from us. We generally ship the same day, for free anywhere in the country on all but the smallest orders. Our shop can only exist with your patronage.
Posted by UpCountry Sportfishing at 7:47 AM