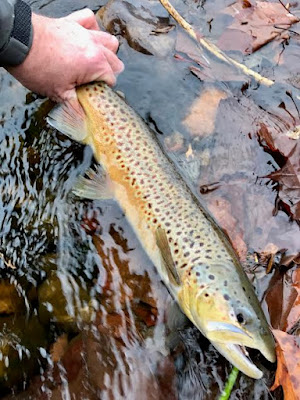 A long & skinny male brown I caught Wednesday morning on a #16 Caddis Pupa. We are in the midst of the trout spawn right now, and they often lose weight due to the rigors of spawning. Please avoid walking on redds- these are the light colored areas in shallow gravelly riffles where trout dig out their spawning beds. If you walk on the redds, you will crush the eggs & future wild trout. Still plenty of good fishing reports from those adjusting to the conditions. This weekend looks nice, with sunshine and highs upper 40s to mid 50s. I imagine Caddis hatches are getting near the end, but we are still seeing them (tan in #16-18), especially on milder days, and olive/green Caddis Larva are never a bad choice on the Farmington River, the riffles are LOADED with them. The current "glamour hatch" is  the afternoon Blue Wing Olives, running a #24, or even smaller. Think 12-15' 7x leaders for the small #24 dries on flat water, and 12' 5x-6x leaders for the #16-22 nymphs that are most effective. Streamers are catching a lot of trout currently, try yellow, olive, white and black, all colors have their moments of superiority so play around. The egg bite is still in full swing, so make sure to fish small egg patterns.

Total flow in the permanent Catch & Release (C&R/TMA) is 110cfs- lower than normal, but significantly better than the 65cfs of several weeks ago. The USGS gauge in Riverton is reading 53cfs this morning, with an additional 57cfs coming if from the Still River- they are letting water out of Highland Lake, which drains into the Still, hence the improved flows there. The Still River dumps in about 1/4 mile below the Rt 20 Riverton bridge, so from that point down, the flow is better. Not sure how long this extra water will last, so take advantage of it before it goes away.

Fishing reports vary from day to day, but overall remain good for those who are flexible in their approach. As is normal in November, afternoons are normally the best fishing, especially if it was extra cold the night before (water temps rise in the afternoon, getting both the bugs & trout more active). Water temps are ranging from low 40s to low 50s, depending upon day, time of day, and distance from dam. Afternoon Blue Winged Olives (BWOs) #24 and smaller are becoming the dominant hatch, look for them around 1pm'ish (make sure to also have some small Rusty Spinners, for late afternoon). Still some Isonychia, but getting smaller (as in #14) and more olive in color. Also still some Tan Caddis #16-18, make sure to have both dries & pupa. While Caddis Pupa (tan, brown) and small nymphs (Midges, BWOs, Quasimodos, attractors, etc.) remain top producers, the egg bite is in full swing, so make sure to have some egg flies (small Glo Bugs/Sucker Spawn/Otter Eggs) in your arsenal. While smaller nymphs have been more consistent than bigger ones, don't rule out Stonefly Nymphs in #8-14 (brown, golden/yellow, black), sometimes they will pull bigger fish.

Streamers are a great fall choice- with the low water, consider going smaller on your streamers if you want to catch numbers, or go bigger and shoot for a trophy, but expect to catch less fish. To really up your odds, try trailing a soft-hackle, nymph or wet fly about 18" behind your streamer (tie tippet to the hook bend on the streamer). Various wets & soft-hackles are producing, particularly upstream in Riverton. Except for the biggest dries, keeep your tippets light, in the 6x-7x range, and nymph with 5x-6x tippet.  Normal #6-8 streamers can be fished on 2x-3x (4x at the lightest for the tiniest ones), big ones should be matched with 0x-1x.

We've gone to Winter hours now, we will be open 8am-5pm 7 days a week, including weekends. Our rental apartment is also closed for the season and will open back up in April 2017.

The FRAA stocked the upper river on 10/6 with 1,200 Brook Trout & Rainbows. Brookies averaged a foot, with the Rainbow Trout running 12-14". The trout were stocked in the section from a little below the dam in Riverton, down to about Whittemore Pool. They've been responding well to a variety of dry flies, wet flies/soft-hackles, and assorted nymphs. The upper river was also stocked by the state with 2,000 trout (mostly browns) for Labor Day from the Goodwin Dam/Hogback in Riverton, downstream to Whittemore Pool at the northernmost point of Peoples State Forest. On 9/26 the state stocked downriver in Collinsville/Unionville. And I think the MDC also put their traditional 1,000+ trout in the upper river in October.

If you like our fishing report, please consider buying your gear from us. We generally ship the same day, for free anywhere in the country on all but the smallest orders. Our shop can only exist with your patronage.
Posted by UpCountry Sportfishing at 9:50 AM