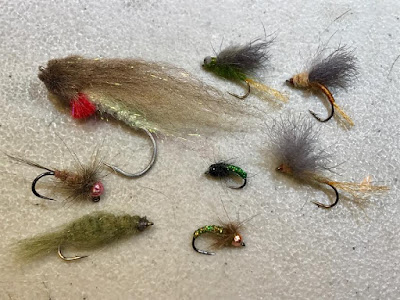 For those of you who missed the Rich Strolis "Guide Flies" class Sunday, pictured are most of the patterns they did, some deadly but easy ties. The "Modern Nymphing" DVD arrived today, see 4th paragraph down for details, it's a good one.

It was busy weekend at UpCountry between the mild weather & tying classes both days (Pat Torrey's "Tying Flies that Trigger Trout" on Saturday)- there were quite a few anglers fishing on Saturday with the sunshine and 50 degree plus highs. Fishing reports were mostly good to very good Saturday, with almost everybody catching some trout on a mix of dries, nymphs & streamers. Sunday was a little cooler & overcast, and the fishing was slower for most (but not all) anglers. The temps of late & for the near future have meant that shelf ice & slush have been non-existent, and iced rod guides have not been a problem either. Flow is currently a moderate 190cfs total in the permanent Catch & Release/TMA/C&R in Pleasant Valley/New Hartford (64cfs at USGS Riverton gauge, plus 126cfs from the Still River)- river remains low & fishable in Riverton, and medium downstream from the Still River and in the permanent C&R.  Look for water temps to range from mid to upper 30's this week (mid to late afternoon water temps will be the highest).

Devin Olsen's & Lance Egan's new "Modern Nymphing" DVD's arrived at UpCountry today- I've personally previewed it, and they did a great job, with clear instruction and excellent cinematography (filmed by Gilbert Rowley of flytying123.com- excellent website, check it out). Devin & Lance are 2 of the top members of Flyfishing Team USA- both scored an individual bronze medal in the World Flyfishing Championships in 2015/2016 respectively, and both years Team USA also garnered team medals (bronze & silver), so you could say these two are legit, truly world class anglers who have held their own against the best in the world (historically France, Spain, Czech Republic, and Poland). Devin's website is tacticalflyfisher.com if you want to check it out and watch a DVD preview, he also has many insightful fly tying & fly fishing articles on there.

Be flexible in your approach, and move if you aren't catching fish or the fishing slows down. Don't be a one-spot angler, keep showing your flies to new fish and your catch rates will improve. Morning Winter Caddis hatches sz 18-24 have varied, with some mornings seeing heavy hatching & rising trout, and other mornings having minimal hatching- you need cold nights to get good hatches. We've also been seeing Midges sz 24-32 some afternoons. Regardless of whether you find risers, nymphing is consistently productive if you know how to do it, and slowly/deeply fished streamers are also picking up fish (sometimes bigger trout). FYI the water from the dam runs slightly warmer in the winter (and colder in the summer), and so normally does not to freeze or slush-up in the upper 2 miles or so, even during really cold snaps. Often, especially on sunny days, if there is morning slush in the permanent Catch & Release are, it clears out by lunchtime.


We are always looking for good trade-in fly rods and reels to sell on our website. If you are looking for some new equipment we will gladly put the value of your used gear toward new items in our store. Give us a call to make an appointment.... our prices on trade ins are typically higher than found anywhere else.

If you like our fishing report, please consider buying your gear from us. We generally ship the same day, for free anywhere in the country on all but the smallest orders. Our shop can only exist with your patronage.
Posted by UpCountry Sportfishing at 9:57 AM