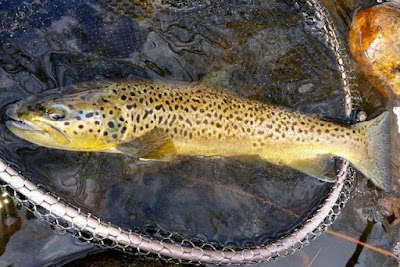 If you've been holding off for milder weather, prepare for a taste of early Spring weather- it's going to be 48-50 degrees this weekend, nice & sunny, not windy, so get your fishing gear together tonight and get ready to catch some trout. Pictured is another nice-looking Farmington River brown trout by Andy Lyons, caught subsurface on a Midge- notice the clipped adipose fine, denoting it as a holdover trout stocked as a Two Year Old, probably in Spring of 2016.

Total flow is currently a low 137cfs through the permanent Catch & Release in Pleasant Valley/New Hartford (57cfs at USGS Riverton gauge, plus 80cfs from the Still River). A little slush coming down by the fly shop this morning (Friday), but with the sunshine it should clear out by lunchtime, if not sooner. Start up near the dam when it's slushy after cold nights, and then you can move downriver around lunchtime when it typically melts. Look for water temps in the 30's (mid to late afternoon water temps will be the highest, especially on sunny days). Hatches still include Winter Caddis (mornings primarily, but sometimes into the afternoon), and Midges (typically afternoons, but can start earlier). We are also starting to see a few of the Winter/Early Stones some days. Hatching activity has ranged from light to pretty good, depending upon the day and location. The Winter Caddis hatch best after cool to cold nights, mild nights actually make for light hatches of them. Nymphing remains the most consistent producer of trout, but streamers are catching too at moments.

Pat Torrey has very limited availability his February "Tying the Wet Fly & Soft-Hackle" two-day class, see "Classes" page for info, call store at 860-379-1952 to sign up before it totally fills.

Winter water temps will typically be in the 30's in the wintertime, depending upon weather, time of day, and distance from dam- it can crack into the lower 40's during warming trends. This means trout have mostly dropped out of faster water and moved into their deeper, slow to moderate current winter lies. Colder water leads to a slower trout metabolism, which means they don't need to eat as much. They look to conserve energy by holding in water with less current, that also has some depth (for security). However, they will often move into riffles at the pool heads to feed on nymphs/pupa/larva when sunshine raises the water temps in the afternoons, which both increases their metabolism and gets the bugs more active.

If you like our fishing report, please consider buying your gear from us. We generally ship the same day, for free anywhere in the country on all but the smallest orders. Our shop can only exist with your patronage.
Posted by UpCountry Sportfishing at 8:46 AM