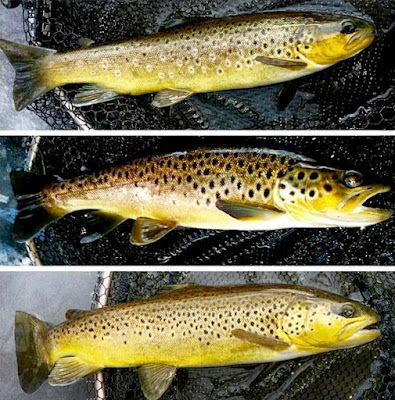 Once again, Andy Lyons providing us with some nice fish porn from his last outing. He picked up some real quality browns on his Midge nymph patterns. FYI a PILE of Wapsi fly tying materials just arrived. With cold nights, morning slush will be an issue for the next few days, so if you are starting early, go up near the dam in Riverton, above the Still River, and it should be slush free. Most days the slush melts by lunchtime or so, then you can head downriver. Total flow is currently a low 118cfs through the permanent Catch & Release in Pleasant Valley, with 55cfs at USGS Riverton gauge, plus 63cfs from the Still River (actual flow may be closer to 90cfs from the Still River, sometimes cold nights make the gauge read wrong). Look for water temps in the 30's (mid to late afternoon water temps will be the highest, especially on sunny days). Hatches still include Winter Caddis (mornings primarily, sometimes into early afternoon), and Midges (typically afternoons). Hatching activity has ranged from light to pretty good, depending upon the day and location. Look for the return to normal winter weather to pick up the AM Winter Caddis hatches, as they hatch best after cool to cold nights, mild nights actually make for light hatches of them. Nymphing remains the most consistent producer of trout, but streamers are catching too at moments.

We still have a couple of slots in Steve Culton's tying class on this Sunday February 5th, "Tying Farmington River Favorites"- it runs 9am-1pm. Call 860-379-1952 to sign up, and see "Classes, New & Reviews" for details.

Devin Olsen's & Lance Egan's new "Modern Nymphing" DVD's arrived at UpCountry last week and is selling fast, we already had to order another batch. They did a great job, with clear instruction and excellent cinematography (filmed by Gilbert Rowley of flytying123.com- excellent website, check it out). Devin & Lance are 2 of the top members of Flyfishing Team USA- both scored an individual bronze medal in the World Flyfishing Championships in 2015/2016 respectively, and both years Team USA also garnered team medals (bronze & silver), so you could say these two are legit, truly world class anglers who have held their own against the best in the world (historically France, Spain, Czech Republic, and Poland). Devin's website is tacticalflyfisher.com if you want to check it out and watch a DVD preview, he also has many insightful fly tying & fly fishing articles on there.

Streamers are still catching fish, especially during low-light conditions- browns are post-spawn & hungry now, looking to bulk up. Experiment with colors & retrieves to find what's best at any given moment (it changes). I would also try to make your presentations mostly slow & deep due to the cooler water temps, both swinging and slow retrieves are good choices. Experiment though, sometimes even in cold water the trout will respond to a fast retrieve, but overall in winter they like it slower. The hot streamer rig has been a weighted streamer with a soft-hackle or nymph trailed off the hook bend 18" behind . Typically the smaller trailing fly catches most of the trout, but some days the streamer does most of the business. This rig allows you to cover a lot of water and present your nymphs/wets in water that would normally be hard to nymph.

If you like our fishing report, please consider buying your gear from us. We generally ship the same day, for free anywhere in the country on all but the smallest orders. Our shop can only exist with your patronage.
Posted by UpCountry Sportfishing at 9:05 AM