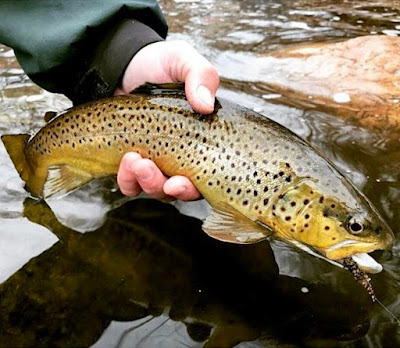 Overall reports were good to very good over most of the past week, with many smiling anglers. Weekend reports were overall slower, due primarily to the river shooting up to 1,000cfs+ and getting off-color by early Sunday morning. It's been dropping since then, and the clarity and conditions are greatly improved as of Monday morning- fishing should pick right back up now. Total flow is currently a very fishable 511cfs & dropping through the permanent Catch & Release in Pleasant Valley/New Hartford (90cfs at USGS Riverton gauge, plus 421cfs & dropping from the Still River)- Riverton flow is still low but improved from a few weeks ago, and from the Still River and below we are medium to medium-high and dropping in the permanent Catch & Release. Water temps will typically average in the upper 30's to mid 40's as we get into March, depending upon weather, time of day, and distance from dam. This means trout will be starting to move around a little, with the bulk still holding in the softer/deeper water of pools and runs, but they will start moving into into the current & riffles now when they want to feed on nymphs/pupa/larva.

The mostly spring-like conditions of late has the bugs active & ahead of schedule, we are seeing all of the Winter/Early Stones at once- Tiny Winter Blacks sz 18-24 (Capnia), Early Black sz 14-16, and Early Brown sz 14-16. Sometimes trout will rise to the Stones, but typically they choose to feed more on the nymphs. Specific imitations work, as do generic flies like Princes, Pheasant Tails and Hare's Ears. With flows coming back down to normal now, #18 Midge larva/pupa nymphed deep should continue to be effective. Despite "the experts" saying the best fishing in the winter is 11am-3pm, I often do best from mid-afternoon until dark, when water temps are normally highest (except during times of heavy snowmelt). Other bugs to look for include Winter Caddis sz 18-24 (mornings primarily, but sometimes into the afternoon), and Midges sz 22-32 (typically afternoons). For Midge larva & pupa nymphed deep, think black, olive, or red. The Winter Caddis hatch best after cool to cold nights, mild nights actually make for light hatches of them. Stones usually hatch better on mild days. Nymphing remains the most consistent producer of trout, but streamers are catching too at moments (just remember to fish them slow & deep first, and if that doesn't work, strip them in faster, but make sure to get them down in the water column).