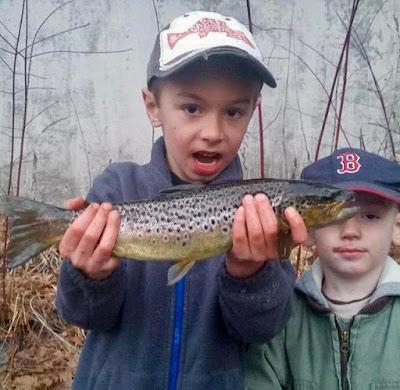 Some epic fishing reports midweek during the mild weather, guide Zach St. Amand reporting 50 fish landed in two 1/2 days of Euro Nymphing the fast water. Pictured is his youngest with a recent winter Farmington River brown trout. Hard to believe it's March already, and the unofficial start of spring. March 1st didn't come in like a lion, felt more like a lamb (60 degrees at 10pm that night at my house), but the lion is appearing for a couple of days now. Sunday looks like the better of the two days, with sunshine and a high of 34, Saturday will be very windy with a high only in the teens! FYI cold nights usually see good Winter Caddis hatches in the mornings. We are stocked to the gills if you need anything- fly tying supplies, waders, rods, reels, fly lines, leaders clothing, sunglasse, books, etc., cold/windy days in March are a good time to get restocked. It's always nice to start the season off with a new fly line that floats high and shoots through the guides like a rocket. Or we can set you up to get into the deadly Euro Nymphing methods.

Total flow is currently a nice medium 239cfs & slowly dropping through the permanent Catch & Release in Pleasant Valley/New Hartford (67cfs at USGS Riverton gauge, plus 172cfs from the Still River)- Riverton flow remains low as it has been for quite a while now. Water temps will drop back into the 30's for the next few days, and then start popping back into the 40's in the afternoons starting Monday when highs move back into the 50's.

There is still a little availability if you want to purchase an FRAA Banquet (it's tomorrow, Saturday March 4th at 6pm) ticket at the store (cash/check only), or you can go on fraa.org and purchase one online with a credit card. As I write this, there are only 2 tickets left for the 75 Ticket Raffle, prize is a Scott Radian 9' #4, with matching Hatch reel & Rio line- these raffle tickets are only available at the store.

The mostly spring-like conditions of late has the bugs active & ahead of schedule, we are seeing all of the Winter/Early Stones at once- Tiny Winter Blacks sz 18-24 (Capnia), Early Black sz 14-16, and Early Brown sz 14-16. Sometimes trout will rise to the Stones, but typically they choose to feed more on the nymphs. Specific imitations work, as do generic flies like Princes, Pheasant Tails and Hare's Ears. With flows back down to normal now, #18 Midge larva/pupa nymphed deep should continue to be effective. Despite "the experts" saying the best fishing in the winter is 11am-3pm, I often do best from mid-afternoon until dark, when water temps are normally highest (except during times of heavy snowmelt). Other bugs to look for include Winter Caddis sz 18-24 (mornings primarily, but sometimes into the afternoon), and Midges sz 22-32 (typically afternoons). For Midge larva & pupa nymphed deep, think black, olive, or red. The Winter Caddis hatch best after cool to cold nights, mild nights actually make for light hatches of them. Stones usually hatch better on mild days. Nymphing remains the most consistent producer of trout, but streamers are catching too at moments (just remember to fish them slow & deep first, and if that doesn't work, strip them in faster, but make sure to get them down in the water column).

Posted by UpCountry Sportfishing at 8:46 AM