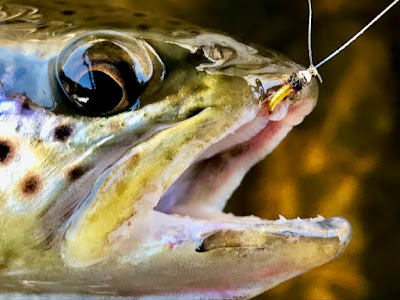 Hello Mr. Brown Trout! After zeroing in 3 spots yesterday (the 40+ mph wind didn't help...), the wind died down and the 4th spot produced multiple hook-ups and even more strikes that I did not manage to hook. #18 Midge/Caddis nymphs seemed to be the ticket yesterday. Bumped into Zach St. Amand at day's end, he pricked some fish while fishing in knee boots with his two young boys. Flows are currently beautiful, after 7+ months of low water, we are at a total flow in the permanent Catch & Release area of 323cfs (205cfs from the dam in Riverton, plus 11cfs from the Still River). I would call this a medium & normal flow for the 2nd week of March. FYI I find March to be an above average month for catching above average trout. I think a combination of rising water temps, increased hatching, plus behavioral drift, gets the bigger fish fired up. Make sure to move around, as the trout are shifting positions this month, and finding their exact lies is part of solving the equation. The bigger trout will select the best feeding spots and push the lesser fish out of those spots.

The Winter/Early Stones are all hatching well most days- Tiny Winter Black Stone sz 18-24 (Capnia), Early Black sz 14-16, and Early Brown sz 14-16. Trout do rise to the Stones at moments for sure, and we have flies here by Don & Bruce to imitate them, but trout feed daily on the nymphs. Specific Stonefly nymph imitations work, as do generic flies like Princes, Pheasant Tails and Hare's Ears. Despite "the experts" saying the prime fishing in the winter is 11am-3pm, I often do best from mid-afternoon until dark, when water temps are normally highest (except during times of heavy snowmelt). Other bugs to look for include Winter Caddis sz 18-24 (mornings primarily, but sometimes into the afternoon), and Midges sz 22-32 (typically afternoons). For Midge larva & pupa nymphed deep, think black, olive, or red. The Winter Caddis hatch best after cool to cold nights, mild nights actually make for light hatches of them. Stones usually hatch better on mild days. Nymphing remains the most consistent producer of trout, but streamers are have been effective as well (just remember to fish them slow & deep first, and if that doesn't work, strip them in faster.

Streamers have been excellent of late. Experiment with colors & retrieves to find what's best at any given moment (it changes). I would also try to make your presentations mostly slow & deep due to the cooler water temps, both swinging and slow retrieves are good choices. Experiment though, sometimes even in cold water the trout will respond to a fast retrieve, but overall in winter they like it slower.