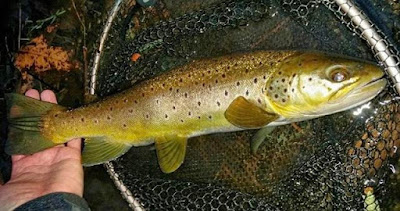 Another recent beauty by Andy Lyons, check out this 19" likely wild specimen of a Farmington River brown trout caught on a Strolis Micro Stonefly Nymph in the permanent Catch & Release in shallow riffle water above a deep pool. Total flow in the permanent Catch & Release area is a medium/normal 290cfs at 8am (197cfs below the dam in Riverton, plus 93cfs from the Still River). I just received an email from the MDC, they are reducing the release from the dam from 194cfs to 153cfs at 9am, which will put the total flow this afternoon around 250cfs in the permanent Catch & Release area (still a nice medium level). With normal flows here again, some normal sized nymphs (#14-16) are working, along with the smaller #18-20 Midge Pupa/Larva that have been so effective the past month. Even some good reports on big #8 Mop flies lately too. If you are looking for rising trout, target the soft water in the big wide pools (generally Caddis in AM, and Midges & Stones in afternoons, but that is a very general rule and varies from day to day).

We have been receiving mass quantities of various products literally every day. Louis Gaudet is back here full-time now, and even with 3 full time employees, and 4 part-time, it's still hard to keep up with product ordering & restocking. We are receiving a big Hareline/Spirit River fly tying materials order this week, and I'm placing another Wapsi fly tying materials order today. I'm both restocking and adding in new products/colors/sizes of materials. Cool new wading boots in from Korkers, lots of new rods and so many other things.

Colder mornings of late have seen a return to slush from below the Still River down, but if you go upstream to Riverton between the dam and the Still (about a 2 mile section), you will be into slightly warmer water and above the slush. Sunny days will often melt the downriver slush out by lunchtime or so. After a brief return to winter (with well over a foot of snow predicted for us this Tuesday, this will help fill the reservoirs when it melts!), temps will go consistently above freezing from Friday onward (high 30s/low 40s). It's been a cruel March, teasing us with May weather, and then giving us single digit lows, but it looks like the end is in sight.

If you like our fishing report, please consider buying your gear from us. We generally ship the same day, for free anywhere in the country on all but the smallest orders. Our shop can only exist with your patronage.
Posted by UpCountry Sportfishing at 9:00 AM