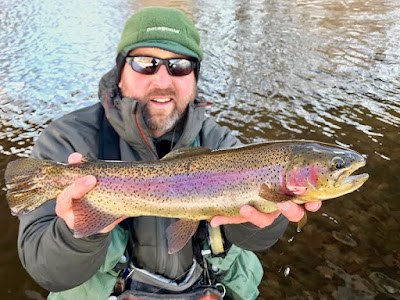 Check out this beautiful 20"+ holdover, colored-up female Rainbow trout I pulled out out from amidst the fresh stockers yesterday, it was a very pleasant surprise. The holdover 'Bows are quite pretty right now, this is the time of year most of them spawn, and they color up for it. FYI the fishing for Mandy & I was fairly ridiculous, with a mix of holdovers, fresh stockers, and even a wild fish or two. The steady 10-20 mph and sometimes 30-40 mph wind forced us to pop Airlock Strike Indicators onto our Euro leaders, and that did the trick. I'd tell you how many we landed, but you'd call me a liar :)  #14-16 Hot Spot nymphs & Pheasant Tails, and #18 Midges/Micro Caddis Larva fished on 5x tippet was the ticket for us. Water temps in the upper river were 35 degrees in late afternoon.

The river has been fishing quite well lately for many anglers. On top of the already plentiful holdovers & wild fish, the CT DEEP stocked the entire seasonal Catch & Release section recently (but NOT the permanent C&R, that doesn't get stocked until just after Opening Day, already plenty of trout in it), from the Hogback/Goodwin Dam down to the bridge abutment at the tail of Whittemore (just above the Campground), and then from just below the Rt. 219 Bridge in New Harford down to the lower Collinsville Dam.

Total flow in the permanent Catch & Release area is a medium & exellent 312cfs (164cfs from dam in Riverton, plus 148cfs from the Still River). With normal flows here again, some normal sized nymphs (#14-16) are working, along with the smaller #18-20 Midge Pupa/Larva that have been so effective the past month. Even some good reports on big #8 Mop flies lately too. If you are looking for rising trout, target the soft water in the big wide pools (generally Caddis in AM, and Midges & Stones in afternoons, but that is a very general rule and varies from day to day).

We have been receiving mass quantities of various products literally every day. Louis Gaudet is back here full-time now, and even with 3 full time employees, and 4 part-time, it's still hard to keep up with product ordering & restocking. We are receiving a big Hareline/Spirit River fly tying materials order any day, and I just placed another Wapsi fly tying materials order.. I'm both restocking and adding in new products/colors/sizes of materials. Cool new wading boots in from Korkers, lots of new rods and so many other things.