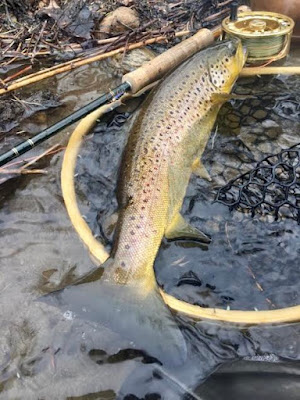 A good looking holdover Farmington River brown trout caught by customer Sam Morse, well below the permanent Catch & Release (C&R) section. He managed some nice holdover & wild browns in the 16-19" range over the weekend on Stonefly Nymphs. This brown has a serious motor on it, look at the size of the tail!

Today is the first official day of spring, and with highs 48-50 today & tomorrow, it will certainly feel like it. Still a pile of snow on the ground though, so it looks more like winter. The good part is that when it melts, it will really help fill the reservoirs up. Best fishing lately has been in the areas that were recently stocked (no surprise there!), from Whittemore to the dam in Riverton (stocked 3/13, about a 4 mile section), and from below the Rt 219 Bridge in New Hartford down to the 2nd & lower dam in Collinsville (stocked on 3/9). The permanent C&R section (6+ miles, from the bridge abutment above Campground at the tail of Whittemore down to Rt 219 bridge in New Hartford) gets stocked after Opening Day, and has plenty of holdover & some wild trout in it already if you are looking for quality over quantity. A lot of spots still aren't plowed, so stop by the shop for the latest on access points. Church Pool, of course, has a plowed out parking lot. Lately the stocked sections are fishing way better than the permanent C&R, and the fresh stockers in those areas are also making the other trout bite better too, probably due to competition.

Total flow in the permanent Catch & Release area is a moderate 244cfs (161cfs from dam in Riverton, plus 83cfs from the Still River). With normal flows here lately, some normal sized nymphs (#14-16) are working, along with the smaller #18-20 Midge Pupa/Larva & Pheasant Tails that have been so effective the past month. Even some good reports on big #8 Mop flies lately too, especially on the recent stockers. Bigger Stones #8-12 are pulling less but bigger fish. If you are looking for rising trout, target the soft water in the big wide pools (generally Caddis in AM, and Midges & Stones in afternoons, but that is a very general rule and varies from day to day).

We have been receiving mass quantities of various products literally every day. Louis Gaudet is back here full-time now, and even with 3 full time employees, and 4 part-time, it's still hard to keep up with product ordering & restocking. We are receiving a big Hareline/Spirit River fly tying materials order later today, and Wapsi should be arriving in the latter part of this week. I'm both restocking and adding in new products/colors/sizes of materials. Cool new wading boots in from Korkers, lots of new rods and so many other things.

Winter & Early Stones are all hatching, especially on milder/sunny days- Tiny Winter Black Stone sz 18-24 (Capnia), Early Black sz 14-16, and Early Brown sz 14-16. Trout do rise to the Stones at moments for sure, and we have some great flies here tied & designed by Don & Bruce to imitate them. However, nymphal imitations are the more consistent producers. Bruce has a new Early Black Stonefly nymph pattern out that we just put in the fly bins. Specific Stonefly nymph work well, as do generic flies like Princes, Pheasant Tails and Hare's Ears. Despite "the experts" saying the prime fishing in the winter is 11am-3pm, I often do best from mid-afternoon until dark, when water temps are normally highest (except during times of heavy snow melt). Other bugs to look for include Winter Caddis sz 18-24 (mornings primarily, but sometimes into the afternoon), and Midges sz 22-32 (typically afternoons). For Midge larva & pupa nymphed deep, think black, olive, red, or yellow (yellow doubles as an imitation of certain small Caddis larva too). The Winter Caddis hatch best after cool to cold nights, mild nights actually make for light hatches of them. Stones usually hatch better on mild/sunny days. Nymphing remains the most consistent producer of trout, but streamers are have been effective as well (just remember to fish them slow & deep first, and if that doesn't work, strip them in faster).

If you like our fishing report, please consider buying your gear from us. We generally ship the same day, for free anywhere in the country on all but the smallest orders. Our shop can only exist with your patronage.
Posted by UpCountry Sportfishing at 10:23 AM