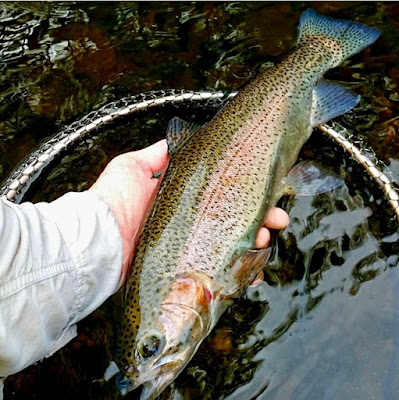 After a fishing layoff due to injury, Andy Lyons is back in action, check out this good looking rainbow he recently landed. Had some good reports over the weekend, especially from the dry fly guys, with fish rising at moments to various bugs. Nymphers continue to catch fish consistently, whether or not they are rising.

Total flow is 105cfs in permanent Catch & Release (C&R)/TMA, water temps have averaged upper 50s to low/mid 60s lately. Looks like we will see some late summer weather a few days this week, with highs 75-80, and then back to fall weather next week. Looking for falls of Flying Ants as air temps rise, mating swarms of them tend to hit the water on warmer days with humidity. No major changes in bugs, with Tricos still the glamour hatch in the mornings (Summer Caddis too), and Isos, Cahills/Summer Stenos & Blue Wing Olives still showing up late afternoon to dusk. We are seeing more assorted Caddis throughout the day, from about #14-22, especially #16-18 tan/brown ones. This can make Caddis patterns a good searching dry, as well as pupa a good choice for nymphers.

The Farmington River is now Catch & Release from 9/1 until Opening Day in April (21 miles straight from Goodwin/Hogback Dam in Riverton down to Rt 177 Bridge in Unionville). If you see anyone keeping trout, POLITELY inform them that it's C&R now- not everybody is aware of this, especially when it first kicks into gear this month. The state stocked the river Friday of Labor Day weekend, from just below the Rt 219 bridge in New Hartford, downstream to Unionville. Later this month, the FRAA will stock 1,000+ rainbows & brookies in the upper river- we are still collecting donations to fund this stocking, just drop them in the jar next to the cash register. The more we get, the better the stocking.

Late summer fishing can get technical at moments, especially when it comes to the small dry fly game on slow to moderate flat water pools. Most of the hatches (with a few exceptions fortunately, like Isonychia) are of tiny bugs (#22-26 & smaller), which require you to be on your "A" game. Wading needs to be slow & stealthy so you don't spook your quarry by sending shock waves through the water. Casts need to be dead accurate, as trout generally won't move more than an inch or two to either side to eat a #24 dry. Fly size can be more important than the exact pattern, with smaller usually being better: trying to force a #20-22 on a trout that is focusing on #24-26 flies is a recipe for catching no fish. Leaders should be long & light (at least 12', and I like to add tippet to that) to separate your fly from the splashdown of your fly line, and to help get a natural, drag-free float. I like longer tippets 3-5' feet for this game, they tend to land in "S" curves, which buys you some drag-free float time. The thin tippets (6x-8x) are not to make your small dries invisible, but rather to help you get a natural, drag-free drift (thinner tippets are both limper/more flexible, as well as tending to land with a little slack in them). I often hear customers say they like a particular leader because "it straightens right out on the water"- well guess what, if your leader lands poker-straight, you have instant drag, you need a little slack in your tippet. Subtle drag is often impossible for you to see from 30-40' away, which is another reason to get as close as is reasonable/possible to rising fish. Learn how to make a Reach Cast, which will show the trout your fly before anything else, as well as giving you both a longer & better float. Trout will often get into a rhythm where they rise at precise intervals- if it's 10 seconds between rises, make sure your fly drifts over them in an accurate drag-free float at the precise moment the fish is ready to make its' next rise. Pat yourself on the back for every fish you catch on a small dry here in the late summer.

The Trico hatch (#22-26 ) has been unusually good in 2017, the spinners are the main event and typically fall in early to mid mornings, but cold nights will delay this to later in the AM. The spinners tend to fall at an air temp of about 68 degrees. Summer/Winter Caddis #18-24 is the other significant AM hatch, usually occuring in early/mid morning. Dry fly wise, afternoons are more about terrestrials, and look for Flying Ants (#18-24) if we get a warm & humid day. Later in the day, look for Isonychia #10-14 (about 4-5pm 'till dark, earlier on cool/cloudy days), small Blue Wing Olives (BWO's) & Rusty Spinners #22-26, and Cahills/Summer Stenos & White Flies #12-16- stay until dark for the best evening dry fly action.