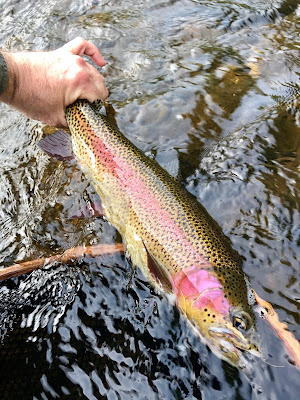 Holiday hours:
UpCountry will be open from 8am-3pm on Labor Day, Monday 9/4. Back to normal hours Tuesday.

Here's an unusually colorful holdover Farmington Rainbow from Thursday. I caught it on a nymph in the early evening in literally inches of water, out of a heavily fished spot in the permanent TMA/ Catch & Release. FYI the state stocked the river Friday from just below the Rt. 219 Bridge in New Hartford, down to Unionville. Fishing has been good in the TMA/C&R, well above it, and way downstream too. Cool weather is keeping the temps good for trout from the dam in Riverton downstream to Collinsville/Unionville- this will make it much easier to escape the crowds now with 20+ miles of river at your disposal. Plenty of trout all over the river (even before they stocked it), and we continue to see good to excellent morning Trico spinner falls. It rained on & off today (Sunday), and the Still River is creeping up a little, but the flow is moderate & excellent, and the rain is now behind us. I'll update flow again on Monday morning, so check back on this report for the latest. I'm glad we finally got some rain, it's been pretty dry here the past few weeks.

The entire Farmington River is now Catch & Release from 9/1 until Opening Day in April (21 miles straight from Goodwin/Hogback Dam in Riverton down to Rt 177 Bridge in Unionville). If you see anyone keeping trout, POLITELY inform them that it's C&R now- not everybody is aware of this, especially when it first kicks into gear this month. 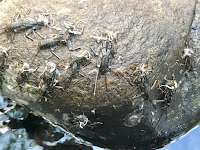 Flow is medium and normal at a total of 237cfs in permanent Catch & Release (C&R)/TMA (189cfs from dam in Riverton, 51cfs from Still River) and the water temps are great (upper 50s to mid 60s lately). Weather has been nice & cool the past 2 weeks, with highs averaging 70s and lows in the 50s. The high did not get out of the upper 50s today (Sunday), and we've had a couple consecutive nights in the 40s. With fall temps already here, it means you can fish downriver, even into Canton/Collinsville/Unionville, although on the occasional hot/sunny day we may still get now and then, it will probably still be better from New Hartford & upriver. But don't be afraid to venture downriver to beat the crowds during cool weather, it's been good up & down the river. Tricos are still the morning glamour hatch, with the spinners falling when air temps are in the mid/upper 60s. Trico Spinner falls have been HEAVY lately. Still seeing big Stonefly Nymphs shucks all over the rocks in fast water.

The Trico hatch (#22-26 ) has been unusually good in 2017, the spinners are the main event and typically fall in early to mid mornings, but cold nights will delay this to later in the AM. The spinners tend to fall at an air temp of about 68 degrees. They are at least as far up as Pipeline Pool/Lyman's Rock, and quite likely above that up into Riverton by now. Summer/Winter Caddis #18-24 is the other significant AM hatch, usually occuring in early/mid morning. Dry fly wise, afternoons are more about terrestrials, and look for Flying Ants (#18-24) if we get a warm & humid day. Later in the day, look for Isonychia #10-14 (usually about 5pm 'till dark, earlier on cool/cloudy days), small Blue Wing Olives (BWO's) #22-26, and Cahills/Summer Stenos & White Flies #12-14- stay until dark for the best evening dry fly action.