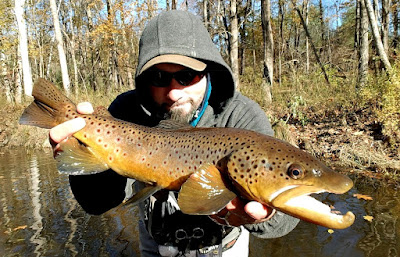 Once again, guide Zach St. Amand puts a mighty impressive trout in the net- 22" plus of hook-jawed colored-up brown trout. Back story: Zach first caught this fish 3 years ago in December 2014 when it was 4" smaller. Two of my friends have also caught this fish. A true catch & release success story. On top of it, he appears to be a wild fish too.

Total flow at 8am this morning (Monday) is very nice at 295cfs in the permanent Catch & Release (C&R)/TMA (186cfs in Riverton plus 109cfs from the Still River). At 9am the MDC will increase the dam release by 36cfs, which will put us at about 330cfs total flow, also a medium, normal & great water level. The big rain 2 weeks ago really fixed the drought, and now the upstream reservoirs are about where they should be, and that means we should have normal flows this winter- no more minimum 50cfs releases. Weather looks back to normal too, with 15 Day Forecast highs averaging in the 40s, and lows in the upper 20s to mid 30s. Right where we should be. Depending upon the day, time of day, and distance from dam, look for water temps to range from mid/upper 30s to mid 40s.

Cold Weather Strategies:
Hey baby it's cold outside! With colder air & water temps, an adjustment in tactics is required. The warmest water by far will be coming out of the dam, and it will get colder as you move downriver during colder weather. The Still River will be coming in significantly colder than the dam water. As such, if you start early, begin in Riverton to hit the best water temps, and wait until the afternoon for the water temps to rise before heading downriver. In general during cold weather, the strategy is to focus on late morning until dusk when air & water temps are highest- it's the most comfortable, and the trout & bugs are most active then. Fish slow & deep and expect strikes to be s-u-b-t-l-e. You need to spoon feed the trout and make it easy for them to eat. I typically wait until at least late morning to start this time of year. The one exception to this is the Winter Caddis hatch. When it is really going (not quite yet but anytime soon), you need to be on the water in early/mid morning to catch it. Other than that, no need to start early in my opinion. While they have been light so far, November is the start of our good fall afternoon Blue Wing Olive BWO) hatches & some surface feeding trout. If they aren't rising, go subsurface with #18-22 BWO nymphs. FYI I find I catch significantly bigger trout on BWO nymphs than on the dries, even when they are rising. Right now nymphing and fishing streamers slow & deep are generally the way to go, unless you have a hatch & steadily rising fish.

The cooler temps of November are usually what trigger our mid/late fall Blue Wing Olive (BWO) hatch of #22-28 bugs on the Farmington. When Olives end on other rivers, our hatch is just ramping up. Look for them sometime between early & late afternoon (typically 1-4pm). Light tippets (6-8x, with 7x the norm) are the rule, not so much because they are "invisible" (they aren't), but because with tiny dries you need the flexibility of the thin line to get that all important natural, drag-free float. The other option is fishing the riffles with smaller #18-22 nymphs that imitate the BWOs, this allows you to fish 5-6x tippet and often results in bigger trout than you catch on the surface. Tan Caddis #14-18 are still in the mix but will be winding down now that it has gotten cold, and a pupa pattern fished subsurface is rarely a bad choice, trout see lots of the naturals. Try also soft-hackles in Caddis colors. Egg flies have been deadly of late. Small nymphs & attractor/hot-spot nymphs are working underneath, and Junk Flies (Mops/San Juan Worms/Squirmy Worms, etc.) can also be a good choice in cold water when bugs aren't hatching. Don't be afraid to toss some streamers now, as trout get more aggressive in the fall due to spawning.  Yellow, brown, and white or combinations thereof are all above average fall streamer colors, and standards like olive, black or brown are never bad choices.

Hatches:
Expect Blue Wing Olives #22-26 to be the main November bug now, you may still see a few Tan Caddis #14-18, but they are almost done- the Olives will ramp up as normal November weather moves in. Other bugs you might see in limited numbers include: Black Caddis, Winter Caddis (they hatch best in cooler temps and should get cranking soon), and Midges. Much of the best dry fly activity has been in the riffles and the upper end of pools such as Pipeline, Roberts, Whittemore, People's Forest, Church Pool, Greenwoods and the Boneyard.

November 15th (this Wednesday), local guide Antoine Bissieux, "the French Fly Fisherman", will be the presenter at the monthly FRAA meeting- he will be talking about French "secrets" to improve your trout fishing. The French are some of the most skilled river trout fishermen in the world, as evidenced by the winning record of the French team in the World Flyfishing Championships. Both presentations are FREE and will up your fishing knowledge, all are welcome to attend. Location is Unionville Senior Center, meet & great begins at 6:30, with the meeting starting at 7pm.
Posted by UpCountry Sportfishing at 9:15 AM