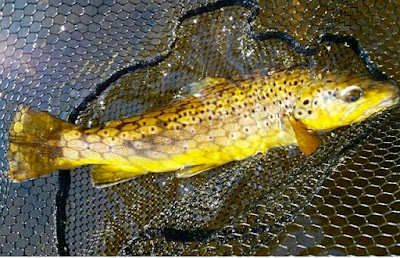 Despite cold weather & wind this past weekend, a surprising number of anglers hit the water here- I think everybody has the itch as we move toward spring. Some anglers targetted the recent stockers and wracked up numbers, and other fished the permanent Catch & Release to go for quality holdovers/wilds and some better fish were landed. Andy Lyons recently nymphed up this pretty brown pictured here, some real quality trout have been showing up this March for those anglers willing to work for them with nymphs & streamers. Notice the clipped adipose fin, showing it to be a holdover Survivor Strain brown trout.

FYI we are expecting a MONSTER order of Wapsi fly tying materials today or Tuesday (THREE big boxes), and we should also see tying materials arrive from Nature's Spirit this week too.

The river has been stocked over the past 2 weeks (except the permanent C&R, which currently has plenty of sizeable holdovers & wilds) from Goodwin/Hogback Dam down to Rt 177 in Unionville/Farmington, and that entire contiguous 21 mile section is all open to catch & release fishing only. Below Rt 177 it's closed to fishing until Opening Day on 4/14 at 6am.

Long range 15 day weather forecast overall looks very good, with highs averaging in the mid 40s most days. Water temps this past week have been in the mid/upper 30s due to the cold weather of late, look for water temps to starting pushing into the 40s again in the afternoons with the return of milder weather. Sunny days are best of all, seeing the biggest water temp increases. This should boost insect activity and get the trout feeding more. Win-win for us anglers, and more pleasant to be out in. Early Black Stoneflies tend to hatch best as temps rise, and this should kick the early spring Baetis Tricauditis (Blue Wing Olives) hatch into gear soon. Woolly Buggers & gaudy nymphs work very well on freshly stocked trout, especially the first 2-3 weeks before they get dialed in to eating real bugs. For the holdovers/wilds, flies that more closely resemble real food tend to work better, with some noteable exceptions at moments. See further down in this report for specific fly suggestions.

Flows:
8am flow is 302cfs in Riverton, 450cfs & decreasing in the permanent Catch & Release section in Barkhamsted (Still River is 148cfs & dropping). The upper 2 miles in Riverton (below the dam) are currently medium/normal. The permanent C&R is clear, with a normal upper-end medium flow and quite fishable. Look for the the flow from the Still River to continue to decline. Per MDC sometime Tuesday they anticipate completing a required release and will suspend the 75cfs "Riparian" portion of the current release. This should translate into a 75cfs reduction in the dam release around midweek.

Current bugs to look for are Winter Caddis (mornings), Midges (afternoons), Tiny Winter (Capnia) & Early Black Stoneflies (afternoons). When fishing this time of year, pick your spot carefully. Trout will seek out refuge from the current, especially in cold water. Typically this means they move closer to the bank, out of the heavier flows. Look for wider pools, and also spots where the river goes from narrow to wider (it make current breaks on both sides of the main flow). Inside turns provide nice soft water for the trout to hold in, and are relatively easy to fish and figure out where the trout are. Streamers are very good for targeting better fish when the water is up, and nymphs are also an excellent choice. Don't be afraid to fish "Junk Flies"- Mops, San Juan/Squirmy Worms, Green Weenies, Eggs/Eggstasy flies, Cased Caddis, big Stoneflies, etc.

Other than the Winter Caddis hatch which sometimes start up just after first light, there isn't a big reason to start at daybreak- the exception would be after mild nights, then it can make sense to wake up early. Mild overnight air temps, above freezing, will get bug and fish activity going earlier than on cold mornings. Sunny days will see the biggest water temps increases. I normally focus on the late morning to late afternoon time slot, with my biggest trout often coming in the last two hours of daylight. Rising trout have been chowing on Midges and Winter Caddis in the major pools at moments. Streamers have also been working well, particularly in medium paced water around structure such as rocks and logs.

Hatches:
We are seeing more & more Stoneflies, both the Tiny Winter Black (#18-24) & Early Black (#14-16). Midges are still hatching, mostly dark colored (black/gray)- if you are fishing Midges subsurface use flies in the #16-22 range (red, black, olive, brown), on top more like #22-28 (gray to black). They normally pop during the mildest part of the day, typically in the afternoons, but will sometimes start in late morning when it's mild. The Winter Caddis #18-24 is normally an early to late morning deal in February, frequently providing some surface activity. We just started seeing a few of the early season Baetis (Blue Wing Olives/BWOs) that average about a #18, sometimes even a #16. Not enough to call it a legit hatch yet, but I'm sure the nymphs are moving around, so try a #16-18 olive colored mayfly style nymph in the afternoons.

Simms new 2018 version of the G3 wader is 190% more breatheable (!), 30% more puncture resistant, has fleece-lined handwarmer pockets with side zips, a velcro docking station for a fly patch, and a G4-style reinforced seat/butt area. And the best part: NO price increase! They are now better than the G4 Pro Wader, but at a much lower price. We also have their new redesigned versions of their Freestone, Guide & G3 vests.
Posted by UpCountry Sportfishing at 9:29 AM