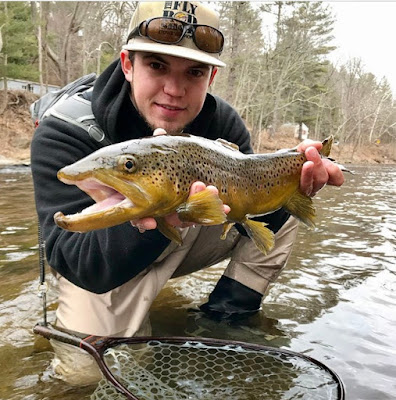 Some peeps have been chasing freshly stocked trout lately, and others have been going for quality over quantity and fishing the unstocked permanent Catch & Release (C&R)/TMA section for bigger holdovers & wilds- looks like Mike Querfeld found a good one this weekend. Swing for the fence, and sometimes you hit a home run (and sometimes you strike out, haha). No guts, no glory. Way to go Mike!

Water levels have been unusually good for late March. I ventured out after work Saturday & Sunday, and managed to make a couple of respectable catches. Saturday the fish seemed more active than Sunday, at least for me. Water temp was about 41 degrees after work both days. Hot spot nymphs, egg flies, and Mops did the job for me. Ask Wade about our "competition" he wanted to do.... looks like I get to wear the belt this week! Haha. I guess every dog has his day.

Long range weather looks great, with highs mostly mid 40s to upper 50s, hitting 60 degrees on Friday. Lows will be in the 30s & 40s. Water temps have been creeping into the low 40s, and with the warming trend they should easily hit the mid 40s in the afternoons, especially on sunny days. This will raise get both the trout and bugs more active. It will improve the nymphing, as well as the dry fly action. Anglers are catching a mix of recent stockers, and medium to large holdovers & wilds. If you want quality fish and are willing to work for them, hit the permanent TMA/Catch & Release (C&R). If you want easier fishing and better numbers, hit the stocked sections mentioned in the paragraph below. Remember that recently stocked trout often pod up, so move around the pools until you locate them. Most trout are still holding in moderate speed water- they want some current, but generally not a lot in cold water. Warm afternoons with good bug activity will often suck fish up into medium speed riffles to feed subsurface on nymphs/larva/pupa though.

The river has been stocked over the past 3 weeks (except the permanent C&R, which currently has plenty of sizeable holdovers & wilds) from Goodwin/Hogback Dam down to Rt 177 in Unionville/Farmington, and that entire contiguous 21 mile section is all open to catch & release fishing only. Below Rt 177 it's closed to fishing until Opening Day on Saturday 4/14 at 6am.

Flows:
8am flow is 232cfs below the dam in Riverton, 363cfs & slowly decreasing in the permanent Catch & Release section in Barkhamsted (Still River is 131cfs & dropping). The upper 2 miles in Riverton (below the dam) are currently medium/normal. The permanent C&R is clear, with a medium flow and a nicer level than normal for late March (normal historical median USGS flow for today would be 528cfs). This will make for above average fishing conditions for late March, especially when combined with the warming trend moving in. Look for the the flow from the Still River to continue to decline.

Currently hatching are Winter Caddis (mornings), Midges (afternoons), Tiny Winter (Capnia) & Early Black Stoneflies (afternoons), and we should start seeing some #16-18 Baetis Tricauditus (Blue Winged Olives). When fishing this time of year, pick your spot carefully if the water is up (currently it's not, it's a medium and angler-friendly flow). Trout will seek out refuge from the current, especially in cold water. Typically this means they move closer to the bank, out of the heavier flows. Look for wider pools, and also spots where the river goes from narrow to wider (it make current breaks on both sides of the main flow). Inside turns provide nice soft water for the trout to hold in, and are relatively easy to fish and figure out where the trout are. Streamers are very good for targeting better fish when the water is up, and nymphs are also an excellent choice. Don't be afraid to fish "Junk Flies"- Mops, San Juan/Squirmy Worms, Green Weenies, Eggs/Eggstasy flies, Cased Caddis, big Stoneflies, etc.

Simms new 2018 version of the G3 wader is 190% more breatheable (!), 30% more puncture resistant, has fleece-lined handwarmer pockets with side zips, a velcro docking station for a fly patch, and a G4-style reinforced seat/butt area. And the best part: NO price increase! They are now better than the G4 Pro Wader, but at a much lower price. We also have their new redesigned versions of
Posted by UpCountry Sportfishing at 8:58 AM