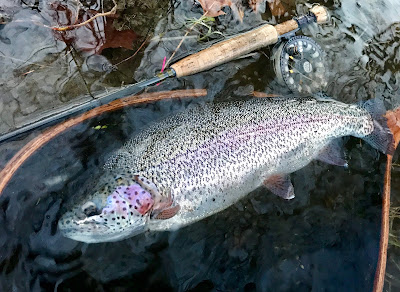 Everything is coming together now: a few Hendricksons are finally starting to show up in the catch & release area, the state stocked the large Two Year Old browns in the permanent catch & release, and they cut the release from the dam some more. Combined with normal late April weather finally here now, water temps are rising and that will get both the bugs & trout more active. Pictured are two of several very fat rainbows I caught after work recently. Many good customer fishing reports the past few days. 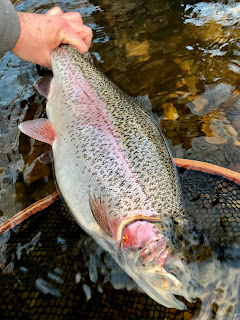 The permanent catch & release (C&R/TMA) was stocked Tuesday with 1,000 large Two Year Old Survivor Strain brown trout. Wednesday they stocked the upper 4 miles of river from Goodwin Dam (Hogback) down to the bridge abutments at the tailout of Whittemore (just above the permanent C&R/TMA), and today (Friday) they stocked from Rt 177 in Unionville to Rt 4 in Farmington. I did not see any DEEP announcement about them stocking the balance of the trout in the Catch & Release area yet (the juveniles & regular adults), but was told by more than one customer that they saw them stock those fish in the TMA/C&R section on Wednesday, so maybe? Reports from fishermen today (Friday) were mostly good to excellent, with many anglers reporting catches well into double digits.

Pat Torrey's first two "Fishing Wet Flies & Soft-Hackle" classes filled up fast, so we scheduled a 3rd one on June 2nd, 2018 (click on class name to go to a description of it).

Flows:
Greatly improved, they cut the dam release from 430 to 300cfs on Thursday. As of Friday morning the USGS gauge in Riverton is reading 323cfs, the Still River is 233cfs, giving us a combined total of 556cfs and dropping in the permanent Catch & Release/TMA. Clarity/visibility is excellent. Water temps are ranging from low 40s to upper 40s, depending upon the river section and time of day. I got 47 degrees in the upper part of the permanent C&R/TMA last night, and 43 degrees in Riverton above the Still River. Water temps will continue to increase each week.

Hendricksons are the biggest news hatchwise, we are just starting to see a few in the permanent C&R/TMA this week, and I suspect they are currently hatching better downriver (Canton/Collinsville/Unionville). Customer reports have varied, with some saying they only saw one or two, and others reporting a good Hendrickson hatch. Thus far it's been light hatching up here in the permanent TMA/C&R for the Hendricksons, and not much rising to them yet, but with dropping flows and rising temps now that will quickly change as the hatch gets going. However it's definitely worth fishing a Hendrickson-type nymph! Baetis/Blue Winged Olives (BWOs) and Paraleps/Blue Quills/Mahogany Duns are both hatching in the afternoons. We are still seeing some Tiny Winter (Capnia)/Early Black Stones, and Midges. Warmer weather here to stay for good now should get things going. Most of the bug activity is still in the afternoons when it's warmest out. The Hendrickson hatch works it's way upstream, starting downriver first and ending in Riverton last.

Nymphers continue to get the best results and are catching the lion's share of the better trout. #12-14 Hendrickson-type brown mayfly nymphs as well as #16-18 Blue Wing Olive nymphs are both working. But, don't neglect other flies like Mops, #12-18 Quasimodo Pheasant Tails, Caddis Larva (both cased & regular), various Hot-Spot nymphs, and Egg Patterns (suckers spawn in April in our neck of the woods, plus recently stocked trout love egg flies). Don't be afraid to fish bigger stoneflies, as in #8-10, either in brown/black, or golden/yellow- bigger stones are on a 2-3 life cycle and there are always a few available subsurface to the trout. The darker Stonefly patterns can also double as a Fishfly larva, which commonly get washed into the drift this time of year when flows are up.

Sage's "On the Water Tour" is coming to UpCountry on Sunday May 6th, 12 noon to 3pm, it will be held just down the street at Brewery Legitimus. You need to stop by UpCountry (on the day of the event, not in advance) to sign up for this free event & get entered for the drawing to win a brand new Sage X rod, SPECTRUM LT reel, and InTouch RIO Gold fly line. There will be a barbeque provided by Sage (50% off food tickets for the first 50 people), and you will have the chance to cast & handle the latest Sage rods/reels and pick their brains. Click the link at the beginning of this paragraph for more details.

The river has been heavily stocked in March & April from Goodwin/Hogback Dam down to Tariffville Gorge (lowermost stocking point). Most of the river is either catch & release or a two fish 12" limit, so pay attention to the signs if you want to keep a fish or two.

CT Trout Stamp:
The new $5 Trout Stamp is now available for purchase at our store and now necessary if you are fishing the Farmington River (even if you catch & release), and on most other streams/lakes/ponds that have trout all across the state (even if you get a free Senior license or a 1/2 price Youth license- but it's only $3 for Youths). The last budget cut $200,000 from the hatcheries, so this is some much-needed funding that is expected to generate about $300,000 for the DEEP fisheries. And yes, the addtional revenue HAS to go to DEEP fisheries, it cannot be diverted elsewhere.

Generally there isn't a big reason to start at daybreak. The late morning to evening time slot should see the most insect and trout activity. The most consistent fishing, unsurprisingly, has been with nymphs. Streamers have also been working well at moments, particularly in medium paced water around structure such as rocks and logs. The freshly stocked trout are still aggressive to basic streamers like #6-12 Woolly Buggers, especially in black, but it's worth trying olive, brown, and white too.

Hatches:
Hendricksons #12-14  and early season Baetis (Blue Wing Olives/BWOs) that run about a #18-22 (sometimes as big as #16) are both hatching in the afternoons. Paraleps/Blue Quills/Mahogany Duns in about a #18 are going too. We are still seeing some Stoneflies- Tiny Winter Black (Capnia, #18-20) and Early Black (#14-16). Midges are emerging, mostly dark colored (black/gray)- if you are fishing Midges subsurface use flies in the #16-22 range, on top more like #22-28. They normally pop during the mildest part of the day, typically in the afternoons, but will sometimes start in mid/late morning when it's mild.

5x fluorocarbon tippet should be about right for most nymphs, depending upon fly size, with 4x for bigger flies like Mops & bigger Stoneflies in higher flows, and 6x for the smallest ones. Think mostly 6-7X for  smaller dries (prob 5x for bigger #14-16 Stones & #12-14 Hendricksons), and 0-3x for streamers. If you haven't yet tried it, the Cortland Ultra Premium Fluorocarbon tippet is amazing, by far the strongest out there with the most abrasion resistance, stretch, flexibility & clarity. Total game-changer, and an extra-good choice if you like to nymph with lighter tippets- here's a link to purchase it off our site: http://www.farmingtonriver.com/cortland-top-secret-ultra-premium-fluorocarbon/

Streamers:
Fish patterns with lots of built-in motion from materials like marabou & rabbit strips. #2-12 flies, especially in colors like white, black or olive- other colors are good too, and it pays to experiment. Think mainly SLOW & DEEP, either swing them or strip in slowly with longer pauses.  Try faster retrieves too, but expect slower/deeper presentations to work better most of the time- let the trout tell you what they want. If you listen, they will tell you. As water temps move into the 50s (any day now), you can start to move them faster. Think Zonkers, Woolly Buggers, Bruce's Yellow Matuka, Dude Friendly, Ice Picks, Mini Picks, Mop Heads, Slump Busters, Sculpin Helmet patterns (for a weighted sculpin imitation), etc.

Simms new 2018 version of the G3 wader is 190% more breatheable (!), 30% more puncture resistant, has fleece-lined handwarmer pockets with side zips, a velcro docking station for a fly patch, and a G4-style reinforced seat/butt area. And the best part: NO price increase! They are now better than the G4 Pro Wader, but at a much lower price. We also have new redesigned versions of their Freestone, Guide & G3 vests.
Posted by UpCountry Sportfishing at 9:27 AM