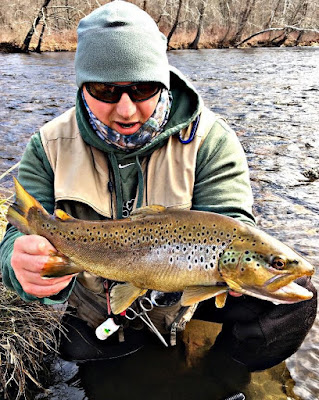 Michael Andrews with a very recent dinger of a brown, so perfect looking. Quality trout are getting landed virtually every day. If you pay your dues, you will be rewarded eventually. Iti's a combination of the right spot, the right presentation, persistence, the right time of day, and the right fly. Pretty much in that order.

Plenty of fishermen were out this past weekend getting a jump on the season. Although Mother Nature gave us some cold nights down into the low/mid 20s and it made people work harder (due to slightly colder water temps), plenty of fish were caught despite that, including some beauties like the one pictured. Flows are much better than normal for early April, medium, clear & very wadeable. A good amount of insect activity was observed, including Baetis/Blue Winged Olives (BWOs), some Midges, and Early Black Stones. Winter Caddis still in the early to mid AM. Some fish have been rising, especially in the mornings to Winter Caddis, and some in the afternoons to Midges & Baetis/BWOs. Overall, nymphers are getting the best results in terms of numbers & size. As temps warm up again this week (50s for Wed/Thurs, high 60s Friday, and 76 degrees predicted for Opening Day 4/14!), look for trout to get more active and hatches to increase. Olive mayfly type nymphs in #16-18 seemed to be working better than average the past couple of days, probably due to the increased Baetis/BWO activity. But don't neglect other flies like Mops, #14-18 Quasimodo Pheasant Tails, Caddis Larva, various Hot-Spot nymphs, and Egg Patterns (suckers spawn in April in our neck of the woods, plus recently stocked trout love egg flies).

Flows:
378cfs total flow in the permanent Catch & Release section in Barkhamsted (177cfs from the dam in Riverton, plus an additional 201cfs from the Still River). The permanent C&R is clear and in great shape, with a medium flow that is very fishable and well below the typical higher early season level you see most years (historical normal total USGS flow for today would be 603cfs).

Some trout have been poking their noses up in Church Pool for things like Winter Caddis (mornings) & Midges, and we've seen some Stoneflies (PM) and a few Blue Winged Olives (PM) too. The best reports are coming from the nymphers, both in terms of numbers and fish size. Tip: Quasimodo Pheasant Tails in #14-20 will imitate quite a few of the nymphs drifting by the trout every day.  Some high quality, above average trout getting both landed & lost. Water temps have been rising into the low/mid 40s most afternoons. This will raise get both the trout and bugs more active. It will improve the nymphing, as well as the dry fly action.

If you want quality fish and are willing to work for them, hit the permanent TMA/Catch & Release (C&R). If you want easier fishing and likely more fish caught, hit the stocked sections mentioned in the paragraph below. Remember that recently stocked trout often pod up, so move around the pools until you locate them. Most trout are still holding in moderate speed water- they want some current, but generally not a lot in cold water. The exception to this is warm afternoons with good bug activity- this will often suck fish up into medium to medium-fast speed riffles & runs to feed subsurface on nymphs/larva/pupa.

The river has been heavily stocked over the past month plus (except the permanent C&R, which currently has plenty of sizeable holdovers & wilds) from Goodwin/Hogback Dam down to Rt 177 in Unionville/Farmington, and is open to catch & release fishing in most of that section (check rule book for exceptions).

CT Trout Stamp:
The new $5 Trout Stamp is now available for purchase at our store and now necessary if you are fishing the Farmington River (even if you catch & release), and on most other streams/lakes/ponds that have trout all across the state. The last budget cut $200,000 from the hatcheries, so this is some much-needed funding that is expected to generate about $300,000 for the DEEP fisheries. And yes, the addtional revenue HAS to go to DEEP fisheries, it cannot be diverted elsewhere.

Simms new 2018 version of the G3 wader is 190% more breatheable (!), 30% more puncture resistant, has fleece-lined handwarmer pockets with side zips, a velcro docking station for a fly patch, and a G4-style reinforced seat/butt area. And the best part: NO price increase! They are now better than the G4 Pro Wader, but at a much lower price. We also have new redesigned versions of their Freestone, Guide & G3 vests.
Posted by UpCountry Sportfishing at 10:23 AM