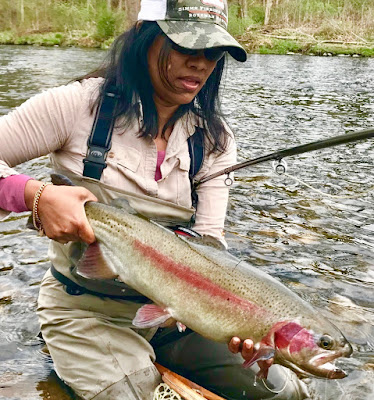 Pictured is my girlfriend Mandy with a beast of Rainbow she landed Saturday while I was at work, it was 24" plus and about 6 pounds and deceived by a big Stonefly Nymph. Some big 'uns have been showing up lately. I ventured out Saturday night after work with Wade, and after we both educated a good number of fresh stockers, he went home and I decided to hit some "in between" water in the hopes of avoiding the freshly stocked trout and hitting a bigger holdover or wild fish. I finally located a good riser just before dark, and managed to get him to eat a #12 Rusty Spinner on the first drift (I know it's shocking, but I do sometimes fish dry flies, haha). It was a very fat brown (lower pic) that looked like he could very possibly be wild or at the least multi-year holdover with perfect fins and no clips or dye mark. Then I found an aggressive riser that appeared to be even bigger, but I ran out of daylight before I could catch him/her. Next time.... 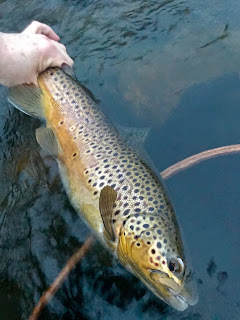 It was a busy weekend here at the shop with nice weather, great flows, perfect water temps and the Hendrickson hatch. These bugs are hatching well from way downriver (Unionville & even below that), and at least as far up as Campground/Whittemore. The hatch has been starting anywhere from 1pm-3pm, and typically lasts about 2 hours. Make sure you have an assortment of dries- light & dark (for males & females), emegers and spinners. And a nymph imitation for when they aren't rising (deadly, especially in the few hours right before the hatch, and even during the hatch if you are a nymphead like me, haha). We are finally starting to see some spinner falls, looks for mild days with no rain that are not windy (otherwise they come out of the trees, and then fly back). The books say they fall in the evenings, but they often hit the water in mid to late mornings, and even overlap the afternoon hatch sometimes. The females will gather in the air over the riffles, they are big at a #12 and have bright yellow egg sacks. And if conditions are to their liking, they will mate in the air and slowly work their way down to the water, which drives the big trout nuts. When trout aren't rising, the nymphing has been spectacular for some anglers. Now that the water has finally warmed up, a pile of trout have moved into the calf to crotch deep riffled water and good catches are being made- ideal scenario for tight-line/Euro/short-line/contact nymphing with a pair of weighted nymphs and/or some split shot to get your flies down. There are so many stocked trout literally all over the entire river, that it's hard to get past the recently stocked fish and get your flies to the better holdovers & wild fish. A good problem to have I guess.

The permanent catch & release (C&R/TMA) has now been heavily stocked over the past 2 weeks with the two year Survivor Strain brown trout and many thousands of smaller yearling/one year old browns. Riverton and New Hartford were stocked recently with large numbers as well. Suffice it to say the river is loaded with trout from Riverton down to Unionville and below- stocked, holdover & wild. If you aren't catching them, you have only yourself to blame, haha. Streamer fishing has really picked up in the last 2 weeks FYI.

Flows/Water Temps:
9am update: MDC cut the release from the dam by 70cfs- this will bring the total flow down to about 275cfs. I suspect this will get even more trout feeding on the surface during hatch activity.

Water levels are excellent- total flow in permanent Catch & Release (C&R)/TMA is 347cfs this morning at 8am as I write this (232cfs below dam in Riverton, plus 115cfs from the Still River). Water temps are reaching into the mid/high 50s now most days (mid 40s in Riverton above the Still River).

Pat Torrey's first two "Fishing Wet Flies & Soft-Hackle" classes filled up fast, so we scheduled a 3rd one on June 2nd, 2018 (click on class name to go to a description of it).

Hatches:
Hendricksons #12-14, early season Baetis #16-20 (Blue Wing Olives/BWOs), and Paraleps #16-18 (Blue Quill/Mahogany Duns) are all hatching in the afternoons. Hendricksons are a full-blown hatch now, and the trout are rising to them. Fishing a Hendrickson nymph or a bigger Pheasant Tail is very effective prior to the hatch (and even during it....). On mild days that aren't windy or rainy, look for Henrickson spinner falls- traditionally in evenings, but they can fall mid/late AM and even overlap the afternoon hatch.

The "New"Cortland Ultra Premium Fluorocarbon tippet is by far the strongest out there with the most abrasion resistance, stretch, flexibility & clarity. Total game-changer, and an extra-good choice if you like to nymph with lighter tippets - here's a link to purchase it off our site: http://www.farmingtonriver.com/cortland-top-secret-ultra-premium-fluorocarbon/

Streamers:
The streamer bite has really picked up. Try #6-14 patterns, especially in colors like white, black or olive- other colors are good too, and it pays to experiment. If you're specifically targetting larger trout, go bigger, but expect to catch less fish. Water temps are into the mid/upper 50s now, which means you can speed up your retrieve. Play around with your presentation & retrieve and see what works. If you listen, the trout will tell you what they want. Think Zonkers, Woolly Buggers, Bruce's Yellow Matuka, Dude Friendly, Ice Picks, Mini Picks, Mop Heads, Slump Busters, Sculpin Helmet patterns (for a weighted sculpin imitation), etc.

If you have some equipment gathering dust in your closet, our shop is "hungry" for trade-ins. We give fair market value toward new equipment in the store..... no waiting for your item to sell, just bring your used fly rods, reels, and fly tying equipment  to us and we will turn it into something shiny and new for the upcoming season. Please call ahead for an appointment.
Posted by UpCountry Sportfishing at 9:09 AM