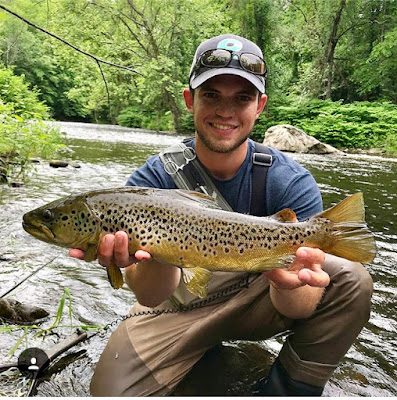 Customer Mike Querfeld celebrated his birthday with some big Farmington butter this past weekend- way to go Mike! Big trout continue to make regular appearances. Pay your dues and you will eventually hook some.

I hit the river for brief sessions the last 2 nights after work. Saturday I saw good numbers of bugs (Vitreus, assorted Caddis, and March Brown spinners) downriver, and I managed a respectable catch of trout, including all 3 species of trout. I landed a pair of 17" fish at the end- one dark colored up bow that fought deep like a brown, and one really nice looking brown that fought like a rainbow with multiple jumps and ripping line off my reel. Last night I stayed in New Hartford and saw much lighter bug activity, although I did see some smaller Blue Winged Olives in the #22-24 range. Had to work hard, but did manage 7 browns & bows to 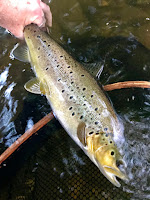 Local guide Mark Swenson is doing another session of his "Fly Fishing 101" beginner classes for us on Saturday, July 7th from 9am until 4pm- click the link to find out more.

Water temps get better as you move downriver (still low/mid 40s up in Riverton, but in the 50s as you go downstream), so I'd recommend staying from below the Still River and down to find the most active trout and better bug activity. Be flexible in your approach and also where you fish. The entire river is currently loaded with trout- stocked, holdover & wild. Those finding the most success adapt to the conditions and move around until they find good fishing. A thermometer will help you find optimum water temps (50-65 degrees). Often you need to fish subsurface with streamers, wet flies/soft hackles, or nymphs. The nymphing & wet fly fishing is good to excellent right now if you know how to do it, and will produce fish whether or not they rise. Streamers will give you a shot at some of the biggest fish in the stream, especially if you fish them in the low light of early morning & evenings.

Bugwise, we are still mainly seeing assorted Caddis (tan, olive/green) and Vitreus (Pink Lady) in the permanent Catch & Release (C&R/TMA) and downriver, but there are a few big March Browns at least as far us as Mathie's Grove. Caddis seem to be most active in the first part of the day, with Vitreus in the latter part. March Browns/Gray Fox and Sulfurs (Invaria) hatching downriver (Canton/Collinsville/Unionville) in modest numbers, even some #12-14 Light Cahills. June is usually the big Sulfur month, everything is a bit late this year. Even though I haven't seen many March Browns (MB's) up by our shop, I've been catching trout on March Brown type nymphs (think big Fox Squirrels & Hare's Ears, as well as specific MB nymphs). The nymphs get active & migrate shoreward about 1-2 weeks before they begin hatching. When the MB hatch really gets going, it's a sporadic and light afternoon evening hatch, one here one there kinda deal. But.... the spinners fall en masse right at dusk. Vitreus also love crappy, overcast weather and will start hatching in mid to late afternoon on these kind of days (normally more toward evenings, even later on hot days).

Subsurface, Caddis Pupa, Pheasant Tails/Frenchies, and small Blue Wing Olive nymphs are taking trout, and big Stonefly nymphs are working in early to mid morning. A variety of attractor/hot-spot nymphs have been very effective also, including Antoine's Perdigon series. Catching trout is not always about exactly matching the hatch (but, sometimes it is, especially during a hatch when trout are surface feeding), it's about getting a trout's attention and enticing them to eat your fly. The best nymphing has been in medium to fast water with some chop to it- just look for current breaks, seams between fast & slow water, drop-offs and structure. Wet flies & Soft-Hackles have been catching plenty of trout too, we have a good selection of them.

Hatches:
Vitreus and assorted Caddis, are the dominant hatches in the permanent Catch & Release (C&R/TMA), and a few March Browns now too. Sulfurs, March Browns/Gray Fox, and Light Cahills are are hatching downriver in modest numbers (first in Collinsville/Unionville/Farmington, and they work there way upstream). Vitreus #14-16 (see pic on below right) remain a major evening hatch in the permanent TMA/C&R and below, they are also known as the Pink Lady- the egg mass in the females gives them a pink/orange glow in their abdomen, the males are more of a pale yellow. They are in the Epeorus mayfly family, just like the Quill Gordon, and they have two tails (not 3). Many people call them a Sulfur, and they sorta are, but they are not a "true" Sulfur in the classic sense (Invaria is is usually the first Sulfur we see, 3 tailed and #14-16 with a yellow body, June being the peak month for them). And just as with the Quill Gordon, the winged Vitreus dun emerges from the nymph at the stream bottom & swims to the surface, which can make a Partridge & Orange, Partridge & Yellow or other yellow/orange/cream bodied wets/soft-hackles good flies to swing during the hatch. #16-18 Caddis (tan, olive) are hatching well in the permanent C&R area and downriver throughout the rest of the river. (nymphers-  make sure to fish the pupa in the fast water, it's lethal). #18-22 Blue Wing Olives remain a good hatch, especially when it's overcast, they have been all up and down the river.

Conditions:
Water level is medium and normal at a total flow of 335cfs at 8am in permanent Catch & Release/C&R/TMA (288cfs in Riverton plus 47cfs from the Still River). Water temps are going into the mid 50s in the afternoons (even higher downriver), especially on sunny/warm days (mid 40s in Riverton above the Still River).

Streamers:
Try #2-14 patterns, especially in colors like white, black or olive- other colors are good too, and it pays to experiment. Typically the low-light periods of early & late in the day are the optimum times to fish a streamer. During the day, target structure (undercut banks, fallen trees, undercut banks, big boulders, etc.) and shady areas. If you're specifically targetting larger trout, go bigger, but expect to catch less fish. Water temps are in the 50s now (Riverton is mid 40s), which means you can speed up your retrieve. Play around with your presentation & retrieve and see what works. If you listen, the trout will tell you what they want. Think Zonkers, Woolly Buggers, Bruce's Yellow Matuka, Dude Friendly, Ice Picks, Mini Picks, Mop Heads, Slump Busters, Sculpin Helmet patterns (for a weighted sculpin imitation), etc.

If you have some equipment gathering dust in your closet, our shop is "hungry" for trade-ins. We give fair market value toward new equipment in the store..... no waiting for your item to sell, just bring your used fly rods, reels, and fly tying equipment  to us and we will turn it into something shiny and new for the upcoming season. Please call ahead for an appointment.
Posted by UpCountry Sportfishing at 9:42 AM