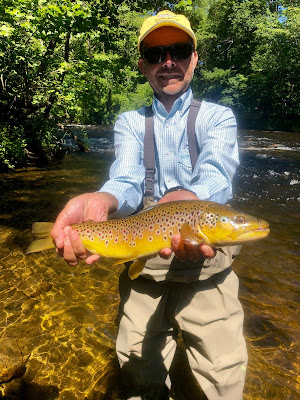 It may be Friday the 13th as I write this, but many anglers are still finding very good luck when fishing. This is what a measured 18" brown trout looks like (most people's guesstimated "18s" are actually 15-16", and the average person would call this 20-21" in my experience... :)), what a perfect specimen of a brown trout. Antoine Bissieux's client Tom caught it yesterday. He said they hit fished 4 hours and hit 4 spots, and caught 3 fish per spot, with one big trout (16" or better) landing at each. So 12 fish total, with 4 big ones, on a mix of nymphs & dries. Not bad for 4 hours!! Don't overlook the shallow stuff- Antoine said that fish came out of 12" of water. July just might be the best month to fish here, we typically have multiple hatches, great water levels/temps, and really good fishing with dries, nymphs, wets, and streamers.


The second batch of George Daniel's brand new book "Nymph Fishing" finally arrived at UpCountry. I've read it, and in my opinion it's excellent! He covers new things he learned in the last 6 years since "Dynamic Nymphing" came out, plus things he has changed his opinion on. Lots of new patterns shown in this book too, plus some new leader formulas. FYI I'm in it :). The first batch sold out fast. We also have the brand new 2nd DVD on Euro Nymphing from Devin Olsen & Lance Egan (filmed by Gilbert Rowley) in, it's called "Modern Nymphing Elevated", and is the follow up to "Modern Nymphing". This one covers many new things, and is geared toward intermediate to advanced anglers (the 1st was more for beginers to intermediates). And just like the first one, the cinematography is excellent.

George Daniel Clinics coming this fall at UpCountry- click on the clinic name to take you to link with clinic descriptions/info. Call shop at 860-379-1952 to sign up, cost is $150, paid in advance, nonrefundable. FYI payment in full is required when you sign up, we cannot "hold" a spot for you without payment. The 9/29 Nymphing Workshop is full now, but we have a #2 Nymphing Workshop scheduled for Saturday October 20th, 9am-2pm:
-9/29/18 Nymphing Workshop (full but we have another on 10/20)
-9/30/18 Streamer Fishing Workshop

#10-12 Isonychia and assorted #16-20 Sulfurs are two of the main hatches here in July. Terrestrials such as ant & beetles can be excellent too. Hatch times will vary depending upon time of day, air temps, and how far up or down river you are. As a rule of thumb, Iso's hatch from late afternoon through the evening, and Sulfurs are typically an evening deal. If you are up in Riverton closer to the dam, you may see some Sulfurs pop in mid to late afternoon, and Iso's can start closer to noon. Make sure to have more than one size Sulfur, because if they are on the smaller #18-20 ones, they likely will refuse a #16. Isonychia live in fast water so look for them there- pool heads, riffles, pocket water & runs. You can even blind fish large Isonychia dries and bring fish up to them, and they are big & buoyant enough to use as a dry/dropper fly. Dry/dropper is very effective in the summer here, run one or two small weighted nymphs behind a buoyant visible dry (2-3 feet under your dry if you are searching/blind-casting the water, but only about a foot if fish are actively rising during a hatch). Iso nymphs are also very effective- try both dead-drifting & swinging/stripping them. They are excellent/fast swimmers, and sometimes the trout want them moving, and sometimes they don't.

Conditions:
Total flow in the permanent TMA/Catch & Release (C&R) remains medium & excellent 333cfs as of 8am this morning. 95% of that flow is coming from the dam, with only 14cfs from the Still- this keeps the river nice & cold for many miles downstream, as the dam runs very cold, and the Still River runs warm. Riverton/Pleasant Valley/New Hartford/Canton should all remain plenty cool enough with water temps ranging from about low 50s in Riverton to the low/mid 60s in Canton. I probably would leave Collinsville/Unionville alone until the weather cools off some more and the downriver water temps drop. If you do go way downstream (and I don't recommend it currently), look for a cooler night, go out in the early/mid morning when water temps are the coolest, and then move upriver to colder water as the day progresses.

Bugs:
Sulfurs are hatching, both the slightly larger #16 (Invaria- all over, but heavier as you go upriver) and the smaller/yellower #18-20 Sulfurs.  #10-12 Isonychia are all the way up & down the river now. I typically think of Iso's as a late afternoon to evening hatch, but you may see them earlier in the day up closer to Riverton (due to colder water closer to the dam). We started seeing #22-26 Needhami this week, they are typically a morning deal, but can also be on the water in the evenings. They are the size of a small Blue Winged Olive, but have a chocolate brown body and darker wings. Assorted Caddis averaging #16-18 in olive-green & tan are hatching everywhere, typically popping in the late morning to early/mid afternoon normally, and then egg-laying at dusk. There are still a few #10-14 March Browns/Gray Fox upriver in Riverton only, and #12-14 Light Cahills, #18-20 Attenuata (a bright green almost chartreuse sort of Blue Winged Olive), #18-26 Blue Wing Olives (early/late, especially on cloudy days) are also hatching. Small Midges are always present, especially in the colder flows up near the dam in Riverton.

Subsurface, Sulfur-type nymphs, big Stoneflies, Caddis Pupa, Pheasant Tails/Frenchies, #10-12 Isonychia nymphs, and small Blue Wing Olive nymphs are taking trout, and big Stonefly nymphs are working (especially early/mid morning for the Stones). A variety of attractor/hot-spot nymphs have been very effective also, including Antoine's Perdigon series. When trout aren't rising, the nymphing has been good. Catching trout is not always about exactly matching the hatch (sometimes it is though, especially during a hatch when trout are surface feeding), it's about getting a trout's attention and enticing them to eat your fly. The best nymphing has been in medium to fast water with some chop to it- just look for current breaks, seams between fast & slow water, drop-offs and structure. Wet flies & Soft-Hackles have been catching plenty of trout too, we have a good selection of them if you need us to pick you out a couple of winners. Wets are both fun to fish & good fish catchers. They also enable you to efficiently cover a lot of water and search for fish. They are most deadly when fish 2 or 3 at a time, with tag end droppers.

Quite a few trout are holding in only 1-2 feet of choppy water lately (especially during hatches and/or low light conditions) and sometimes even skinnier water than that, so don't focus only on the deep stuff. Typically when trout are in shallower water, they are there specifically to feed. Plus many bugs (Isonychia and many Caddis species for example) hatch in fast, often shallow water. Spinner falls typically occur over/in riffles and pocket water. Plus fast water is more oxegenated. All reasons you should should not ignore faster water. Personally I've been targetting fast water almost exclusively since early/mid May, and there have been plenty of trout in residence there. In water that's not too deep, dry/dropper with 1-2 weighted nymphs about 2-3 feet under a buoyant, visible dry fly can be very effective, not to mention fun. It also enables you stay back a bit, and gives you the opportunity to catch fish on both nymphs/pupa & dries. Most days they'll take the nymphs, but you will get plenty of bonus trout on the dry.
Posted by UpCountry Sportfishing at 10:32 AM