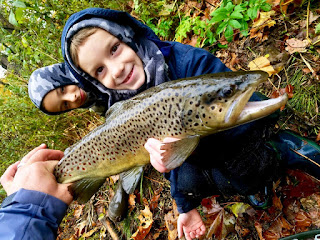 This wet fall is in stark contrast to the past 2 years of droughts. While it may bother some anglers, it doesn't bother the trout one damn bit. In fact, they prefer it, as higher flows conceal them from predators, create more habitat, and wash more food into the drift. Fishing pressure was light this past weekend. Reports have varied over the past week, with some anglers doing quite well, and others struggling. The key is adapting to the conditions, experimenting with flies, covering the water, and moving to different spots if you aren't having success. Check out these two beauties Zach St. Amand's kids landed Sunday on nymphs. 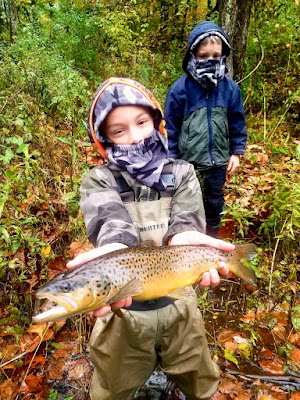 What are the differences between successful anglers and unsuccessful ones lately? Generally the best catches have been made by those who are flexible in terms of how, where & what they fish, and  do what they need to do to get their flies in front of the fish, down near the river bottom. Higher flows typically dictate subsurface tactics. Egg Flies, "Junk Flies" & Streamers are the best flies in the mornings, before the water temps rise a bit and the bugs get active. Save the imitative bugs for the afternoons when the insects are active & available. If you are streamer fishing, finding success may mean covering a lot of water looking for aggressive fish, experimenting with fly colors/sizes/sizes, trying different retrieves (or just a slow swing sometimes), and making sure you are getting the flies down deep enough (weighted flies, split shot, sinking leaders, sink-tip lines, or full sink lines). Lately colors like olive, white, yellow, and tan have been top colors, but also try black, brown, and combinations of these colors. Don't be afraid to deviate from a #6-8 streamer now, sometimes it takes a fly at least 3-4", or bigger, to properly irritate a big brown into striking. This is a good time to throw the meat, the big articulated 4-6" patterns that just might land you a giant- use a heavy tippet (at least 0x for the really big flies). If you are nymphing, make sure you are getting your flies down near the bottom with weighted flies, split shot, or a combination of the two. Both Euro-style & Indicator techniques can catch fish. When flows are up, make sure you don't just jump in mid thigh deep without first fishing the edges, as higher flows push MANY trout near the banks, out of the heavier flows. Try different nymphs: they may want something imitative like a #18 Blue Wing Olive/Baetis nymph in the afternoons, but sometimes they want an egg fly, and sometimes it takes a "Junk Fly" (Mop, Squirmy/San Juan Worm, Green Weenie, etc.) or an attractor nymph (something flashy or with a fluorescent hot spot) to get it done. As a rule of thumb, higher flows call for bigger and/or gaudier nymphs. I strongly suspect that eggish color hot spots may also elicit an egg-eating response from fall trout.

Nymphing is a consistent producer, and October/November are above average months to streamer fish for big browns as the spawn makes them more aggressive & territorial. There is some limited dry fly fishing, especially when the Caddis are hatching. When flows return to normal/lower levels, expect to see more rising fish. Better flies include a mix of assorted streamers, #18 Baetis/Blue Wing Olive nymphs, big Stoneflies, egg patterns, and assorted "Junk Flies" (Mops, Squirmies/San Juan Worms, Eggs,  Green Weenies, etc.). Other than the Winter/Summer Caddis in the early AM, your best shot at dry flies is probably afternoons with Isonychia & Caddis, mostly in the riffles at the pool heads. Small #22-24 Blue Wing Olives are hatching, but with elevated flows the fish are feeding mostly on the nymphs, less so on the surface. However if it's not too windy, you may find fish eating Olives in Church Pool.

Flows & Temps:
Total flow in permanent Catch & Release/TMA in Barkhamstead/Pleasant Valley/New Hartford remains moderately high & fishable at 718cfs and dropping (469cfs from dam in Riverton, plus an additional 249cfs & dropping from the Still River 2 miles below the dam). Water temps are averaging mid to upper 40s in the permanent Catch & Release/TMA, low 50s in Riverton above the Still River  With consistently colder weather here now, water temps will continue to slowly decrease. After colder nights, it may be wise to wait until late morning, thereby giving water temps a chance to rise a degree or two, which will get the trout (and bugs) more active- streamer fishing can be an exception to this, as it's not hatch-related. The other strategy is to start your morning in the first 2 miles below the dam in Riverton, where water temps hardly vary at all during the day (due to being released from down deep), and then by late morning you can go back downriver.

Fall Tactics/Advice:
Now that cooler days and cold nights are here to stay, the water temps are steadily dropping and the days are getting shorter, and this calls for some changes in tactics. Egg flies are effective now- experiment with colors, typically yellows, oranges, and pinks. This is a great time of year to toss streamers, and some good-sized ones at that, for what could potentially be some of the biggest trout you will catch all year. Brown trout get extra aggressive toward streamers in October/November due to spawning. Nymphs are probably the most consistent flies, with a mix of "Junk Flies" & imitative patterns all having their moments. Other than maybe a light hatch of Winter/Summer Caddis in the early AM, most bug activity has now shifted from late morning thru dusk, but subsurface patterns continue to vastly outproduce dry flies due to the above average flows (normal for late October is a moderately low flow of 200-250cfs, currently we are in the 700cfs range and dropping) . Main October bugs will be #14-18 tannish Caddis, #14 Isonychia, and on cloudy days some #22-24 Blue Winged Olives. You will still probably see big Stonefly shucks on the rocks through the end of October, and a few Giant October Caddis (latin name Pycnopsyche, different from the October Caddis they get out west) #8-12 in the eves.

The river was stocked the second week in October with 800+ 13-18" fat rainbows purchased by the FRAA and supplied by Harding Trout Hatchery in New Hartford/Pine Meadow, in spots between the New Hartford 219 bridge and the Satan's Kingdom/Rt 44 bridge. Some of the bigger ones were pushing 3.5-4 pounds. This higher water we had in earlier in October spread them out nicely above & below the stocking points.

New Stuff:
T&T's new award-winning Zone series is finally available, it's a mid-priced ($495) set of rods that perform at a high level, they feel great in the hand and cast beautifully- stop by and cast one in the backyard. They even do a 10' #7 for you Steelhead guys. We also got some cool tying materials in recently, including #20 Hanak 480 Jig Champion hooks, Jan Siman Fine Peacock Dubbing in all the best colors including some UV ones (one of the absolute best materials for nymph collars),  and are once again fully restocked on all the popular colors of Montana Fly Company Barred Sexi-Floss in both small & medium sizes (this makes awesome legs on a Pat's Rubber Leg Stonefly Nymph).

The areas stocked in September/October are yielding the highest catch rates, with Junk Flies & Woolly Buggers doing much of the catching. Make sure to pair your Junk Flies with a "normal", drabber fly (with or without a hot spot). However, the highest quality, bigger holdover and wild trout have mostly been coming from the permanent Catch & Release area, as well as downstream (that is during periods when downstream water levels have been doable). Be advised that you will work harder for these fish and you won't catch as many as in the freshly stocked sections, but your compensation might be a big holdover or wild brown.

The CT DEEP Fisheries did their fall trout stocking for the Farmington River on September 11th, they stocked from below Satan's Kingdom downstream to the Rt 177 bridge in Unionville, and also in the town of Farmington by the Larry Kolp Garden Plot (downstream from seasonal TMA). Also the MDC stocked their 1,000+ trout in the upper river/Riverton (they usually do from below the dam down to Whittemore) on 9/14. The FRAA stocked 800+ 13-18" fat rainbows (some to 3.5-4#!) in New Hartford between the Rt 219 bridge and the Satan's Kingdom bridge recently. But even without these stockings, there was already a bunch of trout in the river, including the sections open to harvest from April through August.

New T&T Contact Steelhead/Lake-Run Brown Trout Rod:
Many of you asked for a "Euro" Steelhead rod, well now you finally have it: T&T released their latest entry into their extremely successful "Contact" series of tight-line/Euro rods, a 10' 8" #6 T&T Contact rod designed for larger fish such as Great Lakes Steelhead & Lake Run Browns. It will handle heavier tippets in the 1x-3x range no problem, and has the power to subdue 10-15# fish, while still protecting your tippet. Joe Goodspeed designed it to have increased durability, while still having a light, flexible and sensitive tip that will help keep the hook from popping out. Not only can you tight-line with this rod, but it throws a 6 weight line like a champ for indicator nymphing & swinging, roll casts easily, and the extra length lets you mend your line better. They also beefed up the cork handle & fighting butt. Homerun!

Streamers:
Now that fall is here with the impending brown & brook trout spawn, trout are aggressive and the streamer bite is on. Try #2-14 patterns  (FYI bigger is often better in the fall, gotta appeal to their aggression), especially in colors like yellow, olive, white, black, brown, or combinations of colors (a little yellow or orange mixed in can be very effective in the fall)- other colors are good too, and it pays to experiment. Typically the low-light periods of early & late in the day are the optimum times to fish a streamer, as are cloudy days. The day or two after a rain, when flows are still elevated & off-color can produce some really good streamer fishing conditions for big trout. During the day, especially when it's bright &sunny, target structure (undercut banks, fallen trees, undercut banks, big boulders, etc.) and shady areas. If you're specifically targeting larger trout, go bigger on your fly, but expect to catch less fish. And FYI a 4-6" articulated fly is not too big if you are looking for top end fish. 3-4" is a good compromise if you want a shot at better fish, but still want to catch some average ones in between the big dogs. Play around with your fly size/pattern/color, presentation & retrieve and see what works- it can make a BIG difference. If you listen, the trout will tell you what they want. Think Home Invaders, Zonkers, Zuddlers, Woolly Buggers, Bruce's Yellow Matuka, Don's Peach Bugger, Dude Friendly, Ice Picks, Mini Picks, Mop Heads, Slump Busters, Sculpin Helmet patterns (for a weighted sculpin imitation), etc.

-Report by Torrey Collins
Posted by UpCountry Sportfishing at 9:24 AM