The river was busy this past weekend, the normal (finally!) flows, warm/dry weather and great fishing brought a lot of anglers out. Seeing more dry fly action now, although the best and biggest catches are still being made mostly by those fishing subsurface. Once again we had many customers give us good to excellent fishing reports, both the trout and the bugs are very active. I fished for a couple hours late night after work and caught a pile of trout, mostly stocked rainbows and a few stocked browns, more than a few in the 14-15" range, and they fought hard. Temps look very normal starting today for the long range, with highs averaging in the 70s and nights down into the 50s, love it. There is 1-1.5" of rain forecasted starting late afternoon today and going overnight. This will likely push the Still River up temporarily (it's low this morning) and bump the total flow up below that for a day or two. You always have the option of going above the Still River, up in Riverton, to find lower/clearer water if need be. We could actually use a little rain, it's been dry lately. I doubt they will increase the release at the dam, my guess is they will keep it where it is (about 375cfs at Riverton USGS flow gauge this morning. 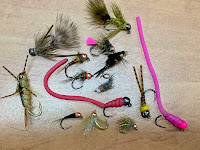 We got in a veritable pile of flies from Fulling Mill, and we have a ton of streamers in the bins now, plus some cool new nymphs and lots of Frenchies. Got some cool patterns in this order from the Fly Fish Food guys, such as the Complex Twist Bugger, Ice Caddis pupa, and Masked Maurauder in a golden stonefly version, George Daniel's Sculp Snack streamer, Tim Flagler's Euro Golden Stone (good anchor fly), Joe Goodspeed's Juvenile Crayfish, and many other deadly new patterns.

Sulfurs, assorted Caddis, Vitreus, and now March Browns are all throughout the permanent TMA/Catch & Release (C&R), and the improved water levels means you should start to see more rising fish. The lower the water, the more trout rise when there is a hatch. It's also easier wading now, with almost all the river accessible to wading anglers. Dries, streamers, wets/soft-hackles & nymphs are all possibilities right now. This is a great time to experiment with fishing a pair (or even better yet a trio) of soft-hackles/wet flies, it is both fun & very effective. It's an efficient and pleasant way to cover a lot of water, and you
can hit those thin water lies near the banks that are hard to nymph- big browns often hold in water like that, especially during hatches & low light.

We have 2 classes coming up this weekend:
-"Intro to Wet Flies & Soft-Hackles with Pat Torrey" on Saturday, June 15th from 10am-4pm
-"Fly Fishing 101 with Mark Swenson" on Sunday, June 16th from 9am-4pm
Go to our Classes/Events page to see the details of either class, and call the store at 860-379-1952 to sign up- each class is filling up but both still have limited availability.

I would currently rate the fishing as excellent with some anglers catching a lot of trout. Those doing the best have been the expert nymphers, and overall subsurface flies have produced the majority of the fish and most of the big ones pictured. The normal flows finally here now should increase the dry

fly fishing as we head into summer. But be willing to go subsurface with nymphs, streamers, and soft-hackles/wet flies to add to your success. Cover a lot of water, and change flies/tactics as needed.

Vitreus #14-16 & Sulfurs #14-16 are both now all the way to the top of the TMA/C&R. Caddis are already heavy throughout the TMA/C&R and up to the Still River. March Browns #10-12 are now hatching up in the permanent TMA/C&R, and assorted Caddis #14-18 are all over the river for a while now. Sulfurs are typically an evening hatch so don't leave early! Vitreus are typically evenings also. If it's cool & cloudy they can start in early/mid afternoon, but on hot sunny days they will hatch in the evening. Caddis typically hatch in the afternoons and egg-lay in the evenings, and March Browns sporadically hatch from late afternoon through evening.

If you are nymphing, think about fishing a #14-16 olive/green to tan Caddis Pupa or Larva, #14-16 Mayfly type nymphs (can be a Pheasant Tail, Hare's Ear, Frenchy, Sulfur Nymph, etc.), or something smaller & olive in the #16-20 range to imitate the Baetis/Olives. The Pheasant Tail is a very effective imitation of Olives and many other mayflies. Also #10-12 Fox Squirrel Nymphs & big Hare's Ears do a great job imitating March Brown/Gray Fox nymphs, they get very active subsurface starting 1-2 week before they hatch, they migrate from faster water into the shallower stream edges. If you are targeting the
fresh stockers, I'd try pairing a natural looking nymph with a Junk Fly like a Mop or Squirmy Worm, or maybe a flashy/gaudy hotspot nymph- deadly combo!

The few people fishing soft-hackles & wet flies are giving me some excellent reports, try soft hackles with Hare's Ear bodies, as well as Partridge & Yellow these flies will cover your Caddis, Vitreus & Sulfurs. I recommend fishing 2-3 at a time, on tag end droppers, spaced about 24-30" apart.

Vitreus are in the Epeorus family and close cousins to the Quill Gordon, I would call them a "pseudo Sulfur"- the "true" Sulfurs are the Invaria (hatching now) & Dorothea. Like the Quill Gordon, they are two tailed and the winged dun emerges from the nymph on the stream bottom, and then the winged dun rises to the surface. They tend to emerge/hatch in faster broken water, with riffles & pocket water being typical habitat. They are normally creamish yellow in color, but the females have a pinky/orange cast to them.

The Two Year Old Survivor Strain browns the state stocked in the Permanent TMA/Catch & Release (C&R) this spring are extra big, quite obese with a good number in the 18" plus range and some even bigger in the 20-21" range. They are putting smiles on a lot of angler's faces . Some big holdovers & wild fish are mixing in with the stockers.
Wanna catch trout? Obey the following  4 rules, laid out years ago by Jack Gartside:
-Rule #1 is find the fish and fish where they are
-Rule #2 is don't spook them!  (FYI big wild trout spook easily)
-Rule #3 is fish something they want to eat
-Rule #4 is present it in such a way they they will eat it (dry fly guys take note: this may mean you
have to fish subsurface!)
I would add Rule #5 fish when the fish are feeding, with hatches being prime-time, especially when they intersect with low-light periods (big browns love to feed in low light). Fishing subsurface a couple hours before a hatch with the matching nymphs/pupa can also be deadly.

Flow Update:
MDC reduced dam release by 67cfs Monday morning 6/10 at 9am, so subtract that number from the flows listed below.


Flow as of Monday morning 6/10/19:
Currently the total flow in permanent TMA/Catch & Release per the USGS gauge this morning is normal & medium at 376cfs (the Still River is 45cfs), and in Riverton the in the 2 miles above the Still River the Farmington is medium/medium-high at 331cfs. USGS average historical total flow for today is 332cfs. The Still River joins the Farmington River about 1/4 mile below Riverton Rt 20 bridge, roughly 2 miles below the dam. East Branch release was 50cfs, MDC said they were going to reduce it to zero last week, it joins the West Branch about 3/8 mile below UpCountry near condos & sewage plant. The Still River drops every day we don't get significant rain, significant rain in the forecast for today/tonight (Monday 6/10) of up to 1.5" will likely raise the Still River and bring total flow up. Fortunately the Still drops fast once it stops raining.

Water Temps:
Look for water temps to average in the mid/upper 50s in the permanent TMA/Catch & Release (upper 40s in Riverton above the Still River), but will vary depending upon the weather, time of day, and specific location.  Long range highs average mid/upper 70s, with lows mid/upper 50s. Warmer, sunny days will see the biggest water temp increases. The exception to this will be during high water releases from the dam, as the colder water from deep in the reservoir chills down the river. Highest water temps will occur in mid/late afternoon, with sunny days seeing the biggest temperature increases. Typically the best bug activity (and fishing) correlates to the most pleasant time of the day for us humans.

-Report by Torrey Collins
Posted by UpCountry Sportfishing at 11:30 AM