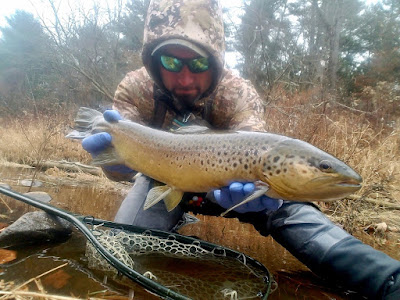 It's looking like Winter out there, and snowing as I write this- see 2nd pic down. The accumulation is less than predicted so far, with maybe 3-4" total as of this morning, and another 2-6" of snow predicted for today/tonight (Monday). Zach St. Amand reported a really good bite yesterday (Sunday) through about 3pm, snow days are often unusually good fishing in my experience- check out the beauty he got in the top picture. I think it's due to the low light conditions, and typically there is hardly any fishing pressure. Just remember that we are moving into Winter conditions now, so fish your nymphs & streamers slow and deep, and look for deeper water with less current: pools, deeper runs & slower/deeper riffles.

Hatches include Winter/Summer Caddis, Midges, and small Olives. Lately the Winter Caddis & Midges have been better hatches than the Olives FYI. Other than the early/mid morning Winter Caddis, the other bugs are afternoon deals. Generally afternoons have provided the better fishing (higher water temps = more active trout & bugs). The most consistent action, and especially for bigger fish, has been subsurface with nymphs & streamers. Good nymphs include Junk Flies (eggs, worms, mops), Stones, Caddis larva, Midges, Olive nymphs & small Pheasant Tails. Nymphwise, Junk Flies have dominated the earlier part of the day, and generally nymphs that imitate bugs have been better in the afternoons. Makes sense, as that's when most of the real insects are active. With streamers, experiment with colors & retrieves, and make sure to get them deep. Colder water normally means slower retrieves/swinging presentations will generally outfish a faster strip when it comes to streamers- but there will still be occasional moments the trout want a faster strip, so make sure to experiment. 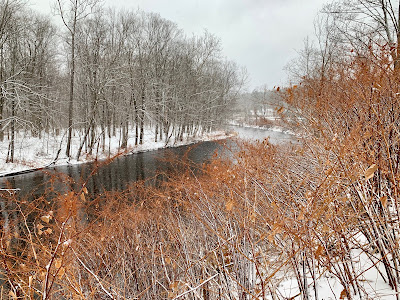 I've been advising people to focus on later morning to late afternoon when water temps are higher and there is more bug activity, and most of you have been doing just that. The one exception would be the Winter/Summer Caddis, they typically hatch in early/mid mornings.

Less hatches in late Fall and dropping water temps means the trout won't normally be in the faster water, so start targeting deeper runs, pools, and softer/deeper riffles. Trout may move into the heads of runs/pools/riffles as water temps rise in the afternoon when the Midges & Blue Wing Olives get active, so keep that in mind. In the mid afternoons look for rising trout in the softer pool water where the riffles slow down and below that- same in early/mid AM when the Winter/Summer Caddis are popping.

Junk Flies (Eggs, Mops, Squirmies) are still top producers almost anytime of day, especially when nothing is going on (they are independent of hatching insects). Midges #22-28 have been the main afternoon hatch, and we are also seeing some Blue Winged Olives (BWOs) #22-26. Before & during the afternoon hatches, the nymphs/pupa that imitate them can be very effective- usually something in #18-20 will get the job done, even though the adults of both are smaller than that. The entire river from Riverton to Unionville continues to fish well, so don't limit yourself to just one section or pool, it's literally all good.

Flows:
Total 8am flow today (Monday) in the permanent Catch & Release is medium and statistically normal at 395cfs (237cfs from the dam, and 158cfs from the Still River).  8am water temp in Riverton was 39.5 degrees. Lowest water temps will be at first light, highest will be mid/late afternoon. Currently trout are most active when water temps are at their highest and/or moving upward, the early to mid morning period has typically been slow, fishing picks up as the day progresses and water temps rise. Afternoon water temps usually increase anywhere from one to several degrees, and sometimes all it takes is a 1 degree increase to get the trout feeding.

A few trout are still spawning (FYI it can go as late as early/mid January), so watch out for redds (light colored patches of gravel in riffly areas where the female browns dig a depression in the gravel to lay their eggs). Several points: 1) please leave the spawning trout alone so they can make more wild trout, 2) spawning is very stressful, so don't add to their stress by catching them, and 3) don't walk on the redds or you will crush the eggs and kill them- some eggs end up in the light colored redd, but many end up slightly below them, maybe 3-10 feet or so. You need to avoid stepping on the redds straight through March or you can crush the eggs that have not yet hatched. Fish in the darker/deeper water downstream of the redds and there will likely be hungry, egg-eating non-spawning trout there . An egg fly can be absolutely lethal as they are a calorie-dense high-value food item for trout, they cannot escape/swim away, and bigger trout love them. Please do not target fish on redds, or fish that are actively spawning. Let them do their thing and hopefully make more wild trout, it's not sporting to pull them off a redd. Spawning is stressful, so don't add to their stress. There are lots of non-spawning fish that are happy to eat your flies.

Cortland's "Top Secret" Ultra Premium Fluorocarbon tippet has a glass-smooth Plasma finish and is by far the best and strongest stuff out there: it has the most abrasion resistance, stretch, flexibility & clarity. Total game-changer, and an extra-good choice if you like to nymph with lighter tippets - here's a link to purchase it off our site: http://www.farmingtonriver.com/cortland-top-secret-ultra-premium-fluorocarbon/
Posted by UpCountry Sportfishing at 10:16 AM