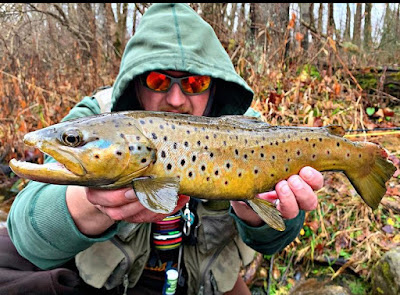 Our store hours have changed for the “off season”: Monday through Sunday, 8am-5pm,7 days a week now. When entering the store please try to maintain a 6ft distance from other customers if possible, and as per the governor's decree you must wear a mask/face covering of some sort inside the store (both your mouth AND nose must be covered, no lowered masks please). We are happy to deliver curbside if you are uncomfortable shopping inside. Just give us a call.

We recently received a massive fly tying materials & fly box order from Wapsi/Angler’s Image, more materials from Nature’s Spirit, and flies & materials from Fulling Mill. Should be a batch of Tacky Fly Boxes arriving this week too. 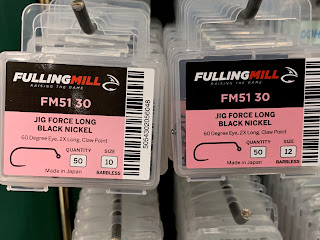 We have the new Fulling Mill Jig Force Long hook in stock in #10 & 12- they rate it 2x long, but they run big in terms of hook gap and shank length, so I’d say the #10 is equivalent to a #8 3xl hook. Great choice for big jigged stoneflies as well as medium sized jigged streamers.

Check out the top pic and the beautifully marked brown by Mike Andrews, what a cool fish- looks like a predator took a bite out of the tail. Customer Mike Swierczynski is in the 2nd fish pic with a sizeable brown, and his buddy Tom Dellipoali is holding a really nice one in the pic below that. 4th fish photo is netful of quality brown trout by Dominic Aiello on a Squirmy Worm. The big trout are scattered all over the entire river, but it's up to you to locate & catch them...

Tuesday Morning Flow Update:
Total flow this morning (Tuesday 12/1) in the permanent TMA/Catch & Release is too high to fish at 1,582cfs (historical USGS normal total for today is 384cfs). Major rain Monday blew out the Still River, but it's actually fishable in Riverton in the 2 miles upstream from the Still River. Water levels will drop rapidly today and we should be under 1,000cfs for Wednesday, which is high but fishable. The Still River drops fast. Think medium to large streamers, Junk Flies (eggs, Mops, worms, Weenies) and larger Stoneflies fished out of the heavy current, closer to the banks. 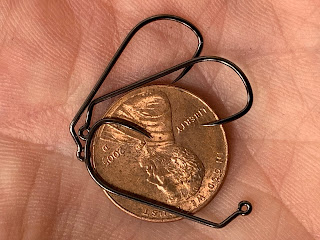 A decent amount of anglers were out over the holiday weekend, with some anglers finding very good success, and others working harder to catch (pretty typical I'd say). Bugs remain small: Blue Winged Olives #22-26 (BWOs), Midges #20-28, and Winter/Summer Caddis #20-24, and overall subsurface has been more consistent than dry flies. Streamer action has varied considerably from day to day, with nymphs being the most consistent of all. Depending upon water conditions, fly patterns have varied quite a bit. November has seen a lot of rain (much needed!) and also some water level changes due to releases from the dam. We are getting a good slug of rain today (Monday), and typically when the water rises and/or discolors Junk Flies (eggs, worms, Mops), bigger Stoneflies & Streamers are the go-to patterns. Sometimes I’ll double up on Junk Flies under those conditions (e.g. Mop & Squirmy Worm), but typically I’ll do one Junk Fly and pair it with a drabber/more imitative nymph. Flow bumps often dislodge Cased Caddis Larva too hint hint. As flows drop/clear, you may find more imitative and/or smaller nymphs more effective. Most late Fall & Winter natural nymphs/larva are small to very small (#18-24), with a few exceptions (larger Stoneflies, Caddis Larva)- typically a #18-20 is small enough, even though the naturals can be much smaller. 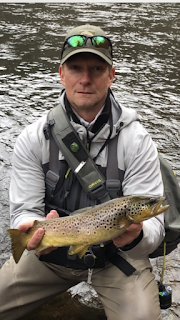 Streamers are often at their best during upward flow bumps, especially if you are looking for bigger fish. During those conditions try colors like black, yellow, white. Most trout are now post-spawn, hungry, and looking for a mouthful of protein. Bigger streamers (4-6”) will give you a shot at the biggest fish, but expect to make a lot of casts for each strike on a typical day. If you want numbers but still a good shot at a trophy, drop the size down to 3-4”. Smaller jigged streamers tight-lined on a Euro rig will often catch the most trout of all, because you are putting the fly right in the trout’s face and making it easy for them to eat it. Dropping water temps in the late Fall also make trout more lethargic so slow & deep is usually the way to go with streamers- as always experiment with colors, size, and retrieve.

Fishing Advice:
Most days the best bite window is late morning through late afternoon/dusk. Try a medium to large nymph (#8-14) paired up with a smaller one (#16-22). Your bigger fly can be a Junk Fly (Mop, Worms, Weenies) or something more imitative like a Stonefly, and your small fly can be a Midge, Baetis/Blue Winged Olive (BWO) nymph, or something generic like a Pheasant Tail (“PT”) or Frenchy. Don’t neglect Caddis Larva (both cased & regular). Most nymphs/larva/pupa are smaller this time of year, and BWOs (Blue Winged Olives) are the dominant November bug- typically a #18-20 is the way to go in BWO nymphs (the dries are normally in the #22-26 range and even smaller). Look for BWO hatches in the afternoons, especially on crappy cool, overcast days. Midges are hatching too, so don’t forget about them, typically an afternoon deal, with Winter/Summer Caddis in the early/mid mornings. While the red hot egg bite is past, eggs are still effective and will work well straight through the Winter and into even the early Spring. Trout are genetically programmed to eat eggs: real ones have lots of calories/protein, and they cannot escape (unlike insects & minnows). This egg eating instinct holds true on all trout species whether they are stocked, holdover or wild. 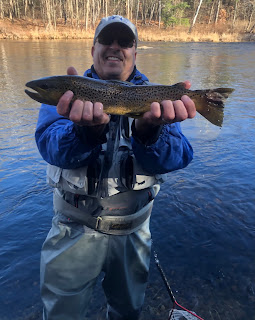 Water temps and best time of day to fish:
Cooler late Fall nights and colder water means you don’t need to start at the crack of dawn unless you are trying to hit the early to mid morning Winter/Summer Caddis hatch. Other than that, the late morning to late afternoon/dusk time slot will typically be more productive, as it puts you into rising water temps and more active trout. It’s not so much the absolute water temp as it is the relative temperature change. As long as temps are moving toward optimal, it tends to get the trout feeding. Temps moving away from optimal tend to shut them down. For the sake of argument lets say optimal is about 60 degrees (give or take, and it varies according to trout species), and water temps of late have been low to upper 40s, so any upward movement of water temps will tend to get the trout going. After a really cold night (lets say in the 20s), in the morning the water further downriver will be colder than the water coming out of the dam, because the dam water comes out the same temp all day long regardless of the air temps. As water flows downstream, it will warm or cool depending on ambient air temps and sunlight (or lack thereof). As the day progresses, if it’s mild & sunny the downstream sections can see warmer water temps than the section up near the dam. You can obviously use these temperature differentials to your advantage, so it’s a particularly good idea to carry a thermometer this time of year. 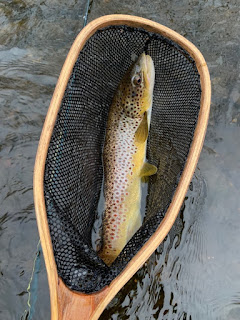 For those of you who have struggled this Fall, the MDC stocked up in Riverton (Rt 20 Hitchcock/Riverton Self Storage bridge up to the dam, about 2 miles) on 11/4 with 1,700 “large” (over 12”) Rainbow trout. Rainbows tend to be easier to catch than brown trout. Try “Junk Flies” such as Squirmy/San Juan Worms, Egg flies, Mops, and Green Weenies. Pair them up with a more natural nymph of your choosing. Also try standard streamers like small to medium sized Buggers in various colors (especially black), that can be VERY effective is you get the flies down deep and play with retrieves.
FYI if you are looking for something different to do, the CT DEEP has so far recently completed THREE 2020 Atlantic Salmon stockings in the nearby Naugatuck River- 1 more Salmon stocking to come in the very near future. Swung & stripped streamers are typically the way to go for the salmon. FYI they love to lay in the tails of pools, especially near rocks.Try medium to large streamers in yellow, white, and black, as well as other colors. Keep your tippet heavy as in 0-2x. This is all C&R (through December 15th) with a single fly/lure with only one hook point (no double hook streamers), and no added weight on the leader/line. Sink tips, weighted flies, sinking leaders, and sinking lines are all perfectly fine, but you cannot add any split shot to your line or add a 2ndfly.
Hot New Rods:
The brand new T&T Contact II series (10' #2, 10' #3, 10' 9" #3, 10' 9" #4 & 10' 8" #6) are now available, and now the 11' 2" #3 has joined the lineup- Zach & I (Torrey) were closely involved with
the prototype development of this last rod, and on version 7 of the prototype they absolutely nailed it. New improved materials, new guide spacing , downlock reel seats are standard now (to better balance), and a new fighting butt design that is more comfortable. Recovery is noticeably better/crisper, and the actions "tweaked" for more big fish playing power, plus the newer materials they use to make the rods inherently store more energy and give the rod more power for casting and playing big trout. The blanks are incredibly strong and much much harder to break. These rods are easy to cast, will give you more distance, and they deliver with improved accuracy. Retail is $825.

Flow:
The Farmington is currently at a total flow of 353cfs through the permanent TMA/Catch & Release (C&R) area (historical normal total flow is 384cfs), and averaging low to upper 40s for water temps- depending upon the weather, river section, and time of day. Riverton is at 240cfs from the dam on the West Branch, and the Still River is adding in an additional 113cfs below it's junction with the West Branch. AM Riverton water temp was 45.5 degrees this morning, it reached 47 degrees yesterday afternoon. Look for water temps to slowly creep downward now that seasonable, cooler late Fall weather is back. Downstream water temps have been cooler in the mornings after colder nights.

Cortland's "Top Secret" Ultra Premium Fluorocarbon tippet has a glass-smooth Plasma finish and is by far the best and strongest stuff out there: it has the most abrasion resistance, stretch, flexibility & clarity. Total game-changer, and an extra-good choice if you like to nymph with lighter tippets - here's a link to purchase it off our site:http://www.farmingtonriver.com/cortland-top-secret-ultra-premium-fluorocarbon/

Posted by UpCountry Sportfishing at 10:54 AM