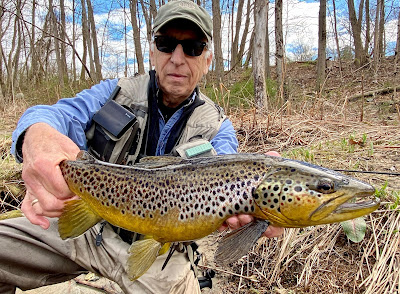 Our store hours through March: Monday through Friday, 8am-6pm, Saturday & Sunday 8am-5pm. We are now open until 6pm on weekdays (not weekends) and will be on that schedule through October. When entering the store please try to maintain a 6ft distance from other customers if possible, and as per the governor's decree you must wear a mask/face covering of some sort inside the store. We are happy to deliver curbside if you are uncomfortable shopping inside. Just give us a call.
Friday afternoon update:
The Permanent TMA/C&R (catch & release) was stocked today. This combined with increasing water temps and more bugs every week should really get the fishing cranking. This section is from the bridge abutments at the tail of Whittemore Pool (just above the Campground on West River Rd), downstream 6.2 miles to the Rt 219 bridge in New Hartford. Any method is legal in this section, but you have to pinch your barbs and all trout caught must be released.

More nice fish recently- get out there and fish, you just might nail one. First pic is an awesome wild by Derrick’s client Alex Rhody, wow. Next check out these 3 beauties by Zach’s son Hunter, all caught on Tuesday & Wednesday. That kid is already a force to be reckoned with. Plenty of others are nailing nice fish too. 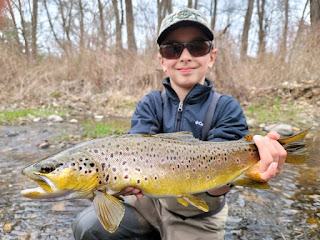 We got in one last batch of Strolis Infant Stones, tungsten #14s- 100 brown, 100 black. The brown ones can also double as a Hendrickson nymph. Great fly pattern, get 'em before they sell out again.

One last day of cold (Friday), then back into the 50s Saturday, and 60 and sunny for Sunday! Getting mixed reports on the Hendrickson hatch. Some are saying they hit a light but fishable hatch & rising fish as far upstream as the lower end of the permanent TMA/Catch & Release (C&R) in New Hartford between 12:30-4pm on Tuesday/Wednesday, but local guide Steve Hogan is saying he’s just seeing a few downriver in Collinsville/Unionville (the hatch starts downriver and works it’s way upstream). Zach has seen a very light hatch mixed with a good amount of Early Stones. I’m sure the colder temps of yesterday (Thursday) & today probably stalled/shocked the hatch, but milder weather comes back in for the weekend. So don’t expect to hit the hatch yet, but…. be prepared to possibly hit it if you get lucky and are in the right place at the right time. Forsythia are in full bloom, and that normally correlates with the Hendrickson hatch. Sunday would be the more likely day as its warmer & sunny, plus that give the river another 48 hours to drop from yesterday’s rain. Currently we are at a high flow in the mid 700cfs range, stained and dropping fast- Riverton is only 215cfs, 500+ is coming in from the Still River, but it is dropping fast. I’d guess a total flow in the 400s/500s for Saturday, and at least another 100+ cfs lower for Sunday. Friday & Saturday look like good days to throw meat if you are a streamer guy- and don’t be afraid to go big right now! 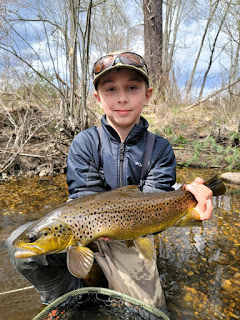 Fishing is finally picking up recently, albeit it's still mostly subsurface with nymphs, streamers & wet flies/soft hackles. Everything but the permanent TMA/CAtch & Release (C&R) was stocked last week. There has been limited dry fly activity, with Church Pool & Greenwoods hotspots for that. Think Early Stones, Baetis/Blue Winged Olives (BWOs), and now also keep an eye out for the Hnedrickson hatch. All three are afternoon deals: BWOs like crappy, overcast cooler days, Stones like warmer/sunny days, so it's usually one hatch or the other, but not both. Hendricksons are usually a mid afternoon deal, but can start as early as noonish sometimes here.

Subsurface with nymphs & streamers is by far the most consistent currently, with some big fish getting caught. Try various #12-16 brown, black and darker nymphs (such as Pheasant Tails, Princes, etc.) that can imitate Early Stones, BMAR Hendrickson nymphs, #16-18 olive to olive brown nymphs for the Baetis/BWOs, and assorted Caddis Larva (regular & cased). Higher flows dislodge lots of cased Caddis. The streamer bite has been solid lately, so don’t be shy about throwing some bigger ones to hopefully connect with some of the bigger trout. Play with retrieves, fly size, and fly color until you hit on what works for that particular moment. 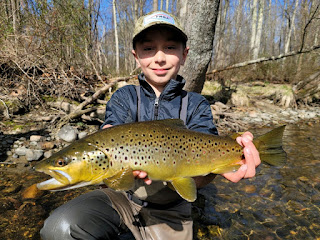 Stocking Update: Last week the entire river outside of the permanent Catch & Release (C&R)/TMA was heavily stocked. Hard to go wrong with Woolly Buggers (black, olive) & Junk Flies (Mops, Eggs, Squirmies, Green Weenies) it you are fishing for fresh stockers. #14-18 Hare's Ears typically work well too. The permanent TMA/C&R will get stocked at some point later this month (Rt 219 bridge in New Hartford upstream to bridge abutments at tailout of Whittemore, just above the Campground entrance.)

Posted by UpCountry Sportfishing at 10:29 AM