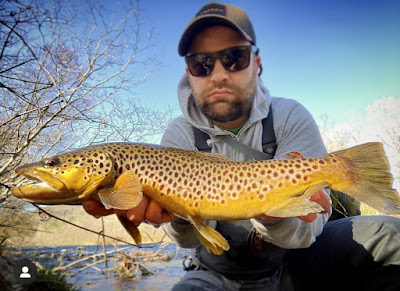 Top pic is a beauty by Lane Finley, second down is a real quality fish by Grant Magee. Third pic is yours truly with a handful of recently stocked fat 2 Year Old Survivor Strain brown from after work on Sunday, it ate a small streamer.

Flowis unusually angler-friendly for late April a t274cfs (historical USGS normal flow is 503fs for today's date). Hendrickson hatch has been best from New Hartford & downstream (Canton, Collinsville, Unionville), but look for it to keep moving upstream this week and get heavier where it’s been lighter- highs averaging in the 60s (80 degree high on Wednesday!)should really get things cranking and push the hatch upstream. It’s already up to at least Church Pool, but it will get heavier now in that section. The colder days we had recently kind of stalled the hatch out a bit. Look for the hatch in mid afternoon typically, although the exact time can vary from day to day depending upon the weather. Keep your eyes out for spinner falls, the books say evenings, but I’ve seen them fall here anywhere from mid mornings to dusk so be attentive. They fall over riffles when it’s mild- cold temps, wind, or rain will make the spinner fall not happen. I often see spinner falls concurrent with the afternoon hatch on this river. Make sure you carry some spinner patterns! Don ties a cool Parachute Egg Sack Spinner for UpCountry, and don’t forget to grab some Dick Sablitz Hendrickson/ Red Quill Soft Hackles, and some of Bruces BMAR Hendrickson nymphs. 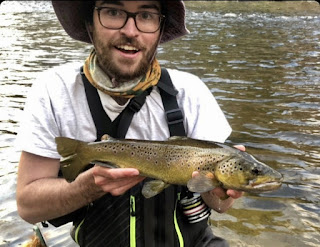 Subsurface with nymphs, wets/soft hackles & streamers has been very consistent. It’s been a windy Spring, but that eases up for the next few days.I’d expect more good fishing, we’ve had tons of happy anglers walking through the doors lately. All methods are having their moments, and anglers are catching a mix of fresh stockers, holdovers, and some wild fish too. Lots of nice sized fish, including some occasional whoppers. You shoulda been here NOW :)

Stocking Update: The entire river has been heavily stocked several times includingrecently, the permanent Catch & Release (C&R)/TMA was stocked a week and a half ago. Hard to go wrong with Woolly Buggers (black, olive) & Junk Flies (Mops, Eggs, Squirmies, Green Weenies) it you are fishing for fresh stockers. #14-18 Hare's Ears typically work well too. 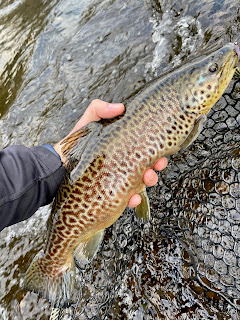 Posted by UpCountry Sportfishing at 10:04 AM