A few fish pics for you: Mandy and I fished yesterday afternoon in the higher flows, and after a painfully slow start we dialed into fish on Junk Flies when the bite seemed to turn on in the late afternoon, and Many got her first Golden Rainbow just before dark. The second pic down is a nice holdover I got on a dry (notice the clipped adipose), one of the only risers in the section where I was. Third down is Brett, a regular client of Zach, with an absolute beauty he got on a streamer earlier this week. 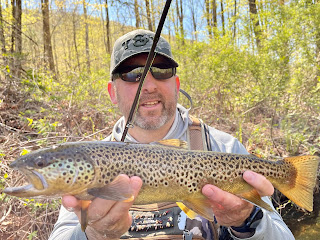 The Hendrickson hatch continues to move upstream, if you are a hatch chaser I’d stay from mid permanent TMA/Catch & Release (C&R) and upstream. The hatch has been generally light to moderate most days, and as short as 15-30 minutes in duration, with other days going 1-2 hours. I saw a light hatch in the middle TMA/C&R Thursday from about 2:30-4pm, but with the higher flows (800+ cfs) not much was rising where we were. Ended up doing well on Junk Flies: Mops, Squirmies, Eggs. Prior to that we struggled to get into fish, but around late afternoon the fish seemed to turn on as the sunshine bumped up water temps. I did manage to find and fool one nice Hendrickson riser on a dry.The flow bump on 5/5 meant that sub 45 degree water was pouring into the river from the dam, lowering water temps. Just got an email from the MDC about 10am, they lowered the release from 400cfs to 300cfs at 9am, and at 11am they are dropping it to 146cfs, the required minimum release. This will bring the flows back to normal for the weekend, and will make for easier wading and better fishing. Should put the total flow in the mid 400cfs range, and will also move water temps back to normal. For all you Hendrickson seekers, start working your way upriver now. Hard to say where the exact bottom hatch boundary is, but it’s heavier upriver. I wouldn’t go much below Church Pool, and it’s heavier as you go upstream from that. We should see fishable afternoon Hendrickson hatches in Riverton above the Still River this weekend. You will continue to see spinner falls for a good week after the hatch is done in downriver sections FYI. 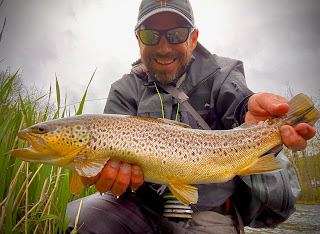 The books say the Hendrickson spinner fall happens in evenings, but on the Farmington I’ve seen them mid to late morning, at lunchtime, mixed with the mid afternoon hatch, and also in the evenings. Look for mild days with minimal wind and no rain- if conditions are not right, the spinners mass over the riffles, but instead of mating in the air and dropping spent onthe water, they go back into the trees and wait for better conditions. But when a spinner fall does happen, it often brings some of the biggest trout to the surface. Where riffles dump into pools is a spinner fall hotspot, but pool tails often also are great in the evenings for big trout. Make sure to bring your “A” game for the pool tails: long leaders, stealthy wading, and delicate drag-free presentations.

Flow:
The Farmington has been high the past two days due to a big release from the dam, but as of 11am today (Friday) they are cutting it back to 146cfs, plus the water from the Still River. As of 8am we were at 723cfs total flow, but this will go down to about mid 400cfs total flow in the permanent TMA/C&R after the 11am flow reduction, and the Still River will continue to drop. Water temps had dropped well down into the 40s due to the large volume of cold water released from deep in the reservoir, but look for afternoon water temps to get back into the 50s with the flow reduction. The Still River runs warmer than the water from the dam this time of year. The East Branch was releasing and additional 200cfs about 3/8 of a mile below UpCountry as of 5/5.

Posted by UpCountry Sportfishing at 11:21 AM