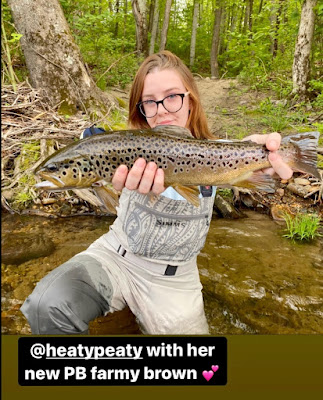 As you can see from the photos, some really nice trout are getting caught. Up top is Heather Heaton with her new personal best brown trout. Next down is a handful of beautiful wild trout by UpCountry’s own Joey Takeman, third down is Derrick’s client with 20” of Farmington brown trout caught Spanish/French nymphing. Fourth pic is outdoor writer Will Ryan with a solid brown nymphed up on a pupa. Last pic is DJ Paul with his best catch ever, Christopher- poor little dude has the same ears as Paul! Haha 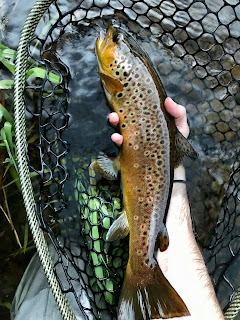 Plenty to update. Water level is quite normal/medium for mid May, total flow in the low 400cfs range (USGS historical median flow for today is 396cfs). More flow is coming from the dam and less from the Still River (which continues to slowly decrease daily), meaning that water temps are a bit cooler than normal (dam release is mid 40s right now, Still River is mid/upper 50s), and water tempsrise as you head downstream. Caddis are the main hatch now, and where before they were mostly New Hartford & downstream, they are now a legit hatchup to the top of the Catch & Release (C&R)/TMA and will probably be all the way up as far as Whittemore/Pipeline/Lyman’s Rock with the warm weather here this week- they are NOT in Riverton yet, the colder water from the damabove the Still River delays the hatches up there.

In New Hartford (near UpCountry)over the weekend, I saw light hatches of #12-14 Vitreus both nights. That hatch should pick up a bit this week, but don’t go too far upstream or you won’t see them.Vitreusare in the Epeorus family and close cousins to the Quill Gordon. They have 2 tails, and the duns emerge from the nymphal shuck on the stream bottom and swim to the surface (just like the Quill Gordon).We normally see them sometime between late afternoon & dark, the last 2 hours of daylight are normally the peak.A swung soft hackle or wet fly in yellow or orange can do a good job imitating these swimming/hatching duns.The females are full of eggs and they show through their abdomen, giving them a creamy color with a pink/orange cast to them and are often called “Pink Ladies”. Many people consider them a Sulfur of sorts, as the malesare pale yellow/creamy in color and hatch at “Sulfur Time”, but usually the “true Sulfurs” are considered to be the Invaria & the Dorothea. June is the peak Sulfur month on the Farmington, but the Dorothea can linger in the colder waters of Riverton as late as early/mid August some years.Invaria run #12-16 (typically #16 here), and Dorothea are #16-20. 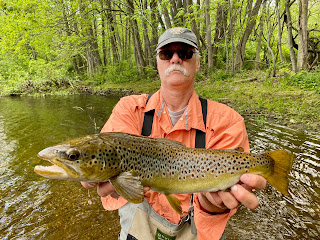 I’m guessing we should start seeing a few #16 Invaria Sulfurs & big #10-12 March Browns in the   lower river (Collinsville/Unionville) sometime this week, but I haven’t had any reports of them as yet. 7 out of 10 of the next days will be in the low/mid 80s, the other 3 will be mid/upper 70s- this should increase water temps and get the hatches cranking. All hatches start first in the lower river first and work their way upstream. The Hendrickson hatch is over, although you might see a few duns in Riverton, along with some lingering light spinner falls(rusty spinner #12-14). Caddis are currently t he main event on almost the entire river now, except for Riverton (not up that far yet). Best bug activity will be from below the Still River, and downstream to as far down as you want to go (Farmington, Avon, Simmsbury).

Seeing both olive/green & tan Caddis now, probably more olive/green than the other colors,but plenty of tan ones too.Thepupa are doing very well fished in mornings & afternoons in the faster water, and will vastly outfish dries during this phase of the hatch as trout typically feed on the pupa subsurface- wets & dries will work well during the evening egg-laying, and I often continue to do well on pupa in the eves too (imitating diving egg layers maybe?).I would say there are currently at least 3-4 different Caddis hatching, maybe more- from a #14 down to a #20 in assorted colors.Dead-drift the pupa, but then let them swing up at the end. Strikes can come at any point. Wet flies & soft hackles in Caddis colors can be veryeffectivewhen they are hatching or egg-laying. On the Farmington, mid to late SpringCaddis hatches typically occur in the late morning to mid afternoon time slot, and egg-laying (which generally creates most of the Caddis dry fly action) is typically in the evening when the light levels drop.FYI weather affects things and insect hatching time slots are not set in stone- heat, cold, cloud cover, sunshine and rain all can change this.Medium to fast choppy water is generally where the Caddis both hatch & egg lay. 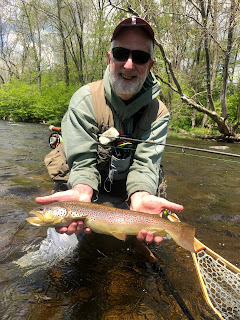 Caddis tip for you “dry fly only” guys: try a Dry/Dropper rig during the late morning/afternoon hatch of a buoyant/visible Caddis dry such as an Elk Hair Caddis, and drop a beadhead pupa 10-24” below that. In the eves use a Caddis dry with a soft hackle dropped one foot below your dry (imitates egg layers & pupa). 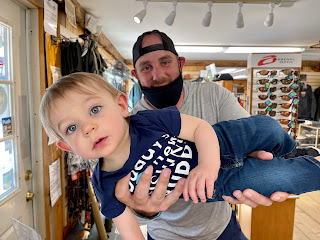 Flow:
The Farmington is running medium and clear at a total flow of 429cfs this morning in the permanent TMA/Catch & Release (C&R). The dam is releasing 331cfs, and the Still River is adding in 98cfs – it dumps in about 1/4 mile below the Rt 20 bridge in Riverton. The Still River runs warmer (well into the 50s) than the water from the dam (mid 40s) this time of year, and so currently it has a positive affect on water temps (raises them).The East Branch is releasing an additional 50cfs about 3/8 of a mile below UpCountry. Unionville USGS gauge is 595cfs this morning- that's a nice flow for down there. Riverton water temp was 46 degrees at 8am, yesterday afternoon it reached 48.5 degrees at the Riverton gauge (water temps are higher downriver, and can reach mid/upper 50s).

Posted by UpCountry Sportfishing at 11:40 AM