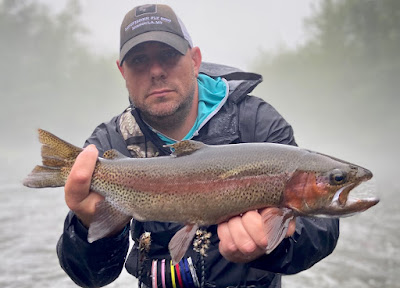 It’s definitely not all browns- local guide DJ Paul up top with a very nice holdover rainbow from the rainy Tuesday this week. Despite the number of browns we post on here, rainbows make up a good percentage of fish caught on the Farmington, especially if you venture outside of the permanent TMA/Catch & Release (C&R). Vanessa’s smile in the second pic tells the whole story, a great day of fishing while out with guide Steve Hogan. Third pic is customer Nathan with a netful of golden perfection. Fourth and last but not least is a beautiful brown in guide Steve Hogan’s landing net.

We have some availability for our awesome upstairs apartment rental- go to our Lodging page to check availability. Great place to stay riverside, completely furnished with a kitchen, and a deck that gives you a view of the river out back. All that and very reasonably priced. 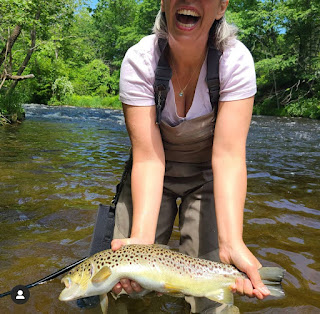 Big Wapsi/Angler’s Image order arrived late Thursday, restocked on a lot of fly tying materials (especially dubbing), Amnesia, and more assorted fly boxes. We have Sulfur nymphs & dries tied by Rich Strolis, and Sulfur nymphs tied by Wade Schools. Sighter Wax is also in stock in 3 colors. New product is arriving daily from assorted companies, so make sure to do a lap around the store when you come in.

Sulfurs have become THEglamour hatch on most of the river. Typically an evening hatch, but can also popin the afternoons on the Farmington, especially upriver where water temps run extra cold. Also seeing March Browns, and still some Vitreus (especially as you go upriver).Various assorted Caddis remain a staple bug, with the pupa consistently producing subsurface- the adults come back in the evenings to egg-lay in faster water. Keep youreyes out for spinner falls of Sulfurs & March Browns in the eves,this can bring some large trout to the surface. Weather has cooled down and is back to normal. On some of the hotter, humid sunny days we saw Flying Ants on the water- normally that’s an August/September deal. Terrestrials such as regularAnts & Beetles are both good options this time of year during non-hatch times as the milder weather has them active. If it ain’t happening on the surface, the nymph fishing underneath has been good. Imitations of all the bugs mentioned above are good choices. And if you are out in early to mid morning, try a big Stonefly nymph #6-10, as they are active and hatching/crawling out on the rocks now. 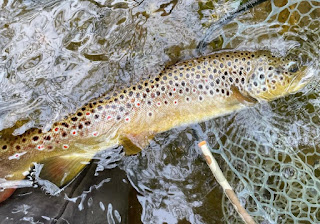 MDC increased the dam release in Riverton by about 80cfs Monday morning, and simultaneously decreased the East Branch release from 100 down to 25cfs. Current flow in the permanent C&R (catch & release)/TMA is 420cfs (355cfs from the dam, plus 65cfs from the Still River). Normal total flow for today would be 351cfs, so we are only about 70cfs above that. Unionville is medium and nice at 473cfs, historical USGS normal median flow for that section is 457cfs.All things being equal, the lower the flow, the more dry fly fishing there is. At momentsnymphing has been a lot more productive than dries, but during bug activity, especially in the eves, you can certainlyfind some risers. Make sure to be flexible in your approach or you can have a rough day. Getting some great reports from the nymphers, but some of the “dry fly only” guys have had a tough time when they cannot find risers. Trout are eating subsurface all day long right now. Focus on the choppy water with some current if you are nymphing. If you cover water and change flies as needed, you should be able to find some good fishing. Or you can be stubborn and inflexible and have a rough day, it’s all your choice...

We are in “Crazy Time” now, that period where multiple different bugs are all hatching at various moments on the same days. Doesn’t always mean that the trout will be rising when you want them too, so be prepared to go subsurface with soft hackles/wet flies & nymphs that imitate the hatch du jourif you don’t see trout on the surface. 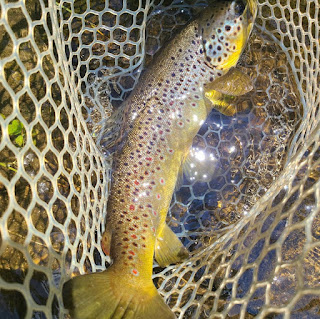 Hatch times can be different than what the books say, due to the Farmington being a cold tailwater. As such we often see Sulfurs hatching in the afternoons. Further downriver, the farther you get from the dam the more the river acts like a normal freestone, rain-fed river, and the Sulfurs emerge later in the day like the books say. March Brown/Gray Fox like to hatch in faster water in the late afternoons through evenings, and are a sporadic hatch- one here, one there. They don’t normally hatch in concentrated quantities for an hour or two like the Sulfurs often do. However, on milder evenings you will sometimes see a good spinner fall of them. The duns tend to emerge near the stream edges, as the nymphs migrate there 1-2 weeks before they hatch- this nymphs migration can also create some good nymphing. Large Stoneflies averaging #6-10 are starting to emerge/crawl out in the early to mid mornings now- you will see their empty shucks on the rocks in the fast water. That is also the water type you want to focus on when nymphing imitations of them in the mornings-this can produce some BIG fish. Pair them up with a Caddis Pupa or a smaller Pheasant Tail/Frenchy/Mayfly nymph.

Caddis currently come in a variety of sizes & colors, from #12-14 tans/grays down to #20 greens, and everything in between (olive, brown, black). They have been active on & off all day long, with peak hatching mornings through afternoons, and egg-laying during the lower light of evenings. Most of the best Caddis action is in the faster choppy water with some current. The morning/afternoon hatch is often more of a subsurface deal with pupa, and there are more rising trout in the evenings when they egg-lay. Assorted Caddis are all over the river, including Riverton all the way up to the dam.

Flow:
The Farmington is running medium/medium high and clear at a total flow of 419cfs this morning in the permanent TMA/Catch & Release (C&R). It is 355cfs below the dam in Riverton, and the Still River is adding in 63.5cfs and dropping – it dumps in a little below the Rt 20 bridge in Riverton. The Still River runs warmer (60s) than the water from the dam (upper 40s) this time of year, and so currently it has a positive affect on water temps (raises them). The East Branch is releasing an additional 25cfs about 3/8 of a mile below UpCountry last I knew. Unionville USGS gauge is 473cfs this morning- that’s a medium flow for that section this time of year. Riverton water temp was 48 degrees at 8am, yesterday afternoon it reached 51 degrees at the Riverton gauge (water temps are higher downriver, and can reach mid/upper 50s currently, low 60s in Collinsville/Unionville during hot sunny afternoons).

Posted by UpCountry Sportfishing at 10:33 AM