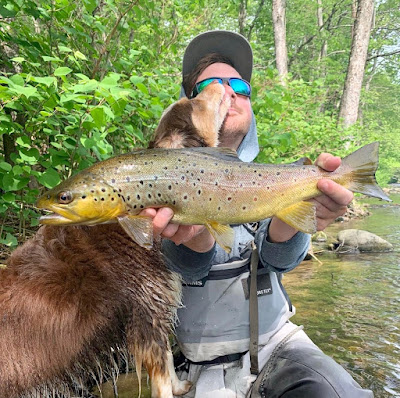 We have some availability for our awesome upstairs apartment rental for the next several weeks- go to our Lodging page to check availability. Great place to stay riverside, completely furnished with a kitchen, and a deck that gives you a view of the river out back. All that and very reasonably priced. More Simms clothingarrived, plenty of sun hoodies now, and a new color/logo in the T&T sun hoodies is here.

Some nice trout pics for ya. Up top is Trevor and his dog Harley with a very pretty brown. Second down is Derrick’s client Wayne with one of three sizeable holdovers landed on dries. Third down is a collage of the better browns Jim DeCesares landed in May on the Farmington. 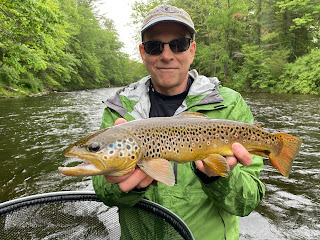 FYI some of you have been asking for Sighter Wax- it’s a neon fluorescent paste you can apply to your leader while Euro nymphing, and it gives you a super visible section to focus on, and it can be wiped off and put wherever you want.

The holiday weekend is past us, and so is the cold & rainy weather- we received about 3” of H2O, and just like the rest of the northeast our area needed it. The weather through Friday looks nice overall, with highs mostly in the 70s. Flow has dropped quite a bit, we are 625cfs total flow in the permanent TMA/Catch & Release section and dropping. I would call this a medium-high level, and it is very fishable. The East Branch is releasing 150cfs a bit downstream of UpCountry (slightly above Satan’s Kingdom). Reports were all over the place during Memorial Day weekend, with some anglers doing surprisingly well in the high water & cold temps, and others struggling. Those who knew the river well and were flexible in their approach did the best. #16 Sulfurs (Invaria) are at least as far upstream as the top end of the permanent TMA/C&R now. In that section they’ve been more of an afternoon hatch, while downriver (Collinsville/Unionville) on warmer days it’s been an evening event. Weather & water temps affect the hatch time. We are seeing #10-12 March Browns at least as far up as New Hartford. They like to hatch in faster water in the late afternoons through evenings, and are a sporadic hatch- one here, one there. They don’t normally hatch in concentrated quantities for an hour or two like the Sulfurs often do. However, on milder evenings you will sometimes see a good spinner fall of them.

Nymphing remains the most consistent method, no surprise there. Caddis pupa & Mayfly nymphs fished in the faster water can catch fish all day long. Dries, streamers, and wet flies/soft-hackles are all having their moments too. Depending upon the day, the weather/temps, and river section fished, hatches can be at just about any time of day, so be flexible. And just because there is a hatch doesn’t mean that the trout will rise, so be flexible in your approach, because you may need to fish subsurface with nymphs or soft-hackles. Dry/Dropper rigs are also a good choice during hatches as they cover 2 bases at the same time- read the paragraphs below for more detailed advice.

Caddis currently come in a variety of sizes & colors, from #14 tans down to #20 greens, and everything in between (grays, browns, black). They have been active on & off all day long, with peak hatching mornings through afternoons, and egg-laying during the lower light of evenings. Most of the best Caddis action is in the faster choppy water with some current. The morning/afternoon hatch is often more of a subsurface deal with pupa, and there are more rising trout in the evenings when they egg-lay. Assorted Caddis are all over the river, with the exception of Riverton- colder water temps delay hatches in the upper 2 miles above the Still River. Vitreus #12-16 are a legit hatch on most of the river now, but again not up in Riverton yet.

A great rig during morning/afternoon Caddis hatches is a buoyant/visible dry such as an Elk Hair Caddis with a weighted pupa trailed 10-24” below that. During evening egg-laying, try a Caddis dry with a soft hackle trailed 1 foot below (imitates diving egg-layers). During the hatch, if they are eating on top, make sure to fish a pupa/emerger pattern that floats low in the film, preferably with a trailing shuck. But often they don’t rise during the emergence, instead choosing to stay deep and let the current deliver the food right to them. In that case, nymphing the faster water with the appropriate pupa patterns can be lethal. Dead-drift your pupa, but always allow them to go downstream & swing below you. Caddis are above average swimmers and sometimes a swinging pupa outfishes a dead-drifted one.

Vitreus are in the Epeorus family and close cousins to the Quill Gordon. They have 2 tails, and the duns emerge from the nymphal shuck on the stream bottom and swim to the surface (just like the Quill Gordon). We normally see them sometime between late afternoon & dark, the last 2 hours of daylight are normally the peak. A swung soft hackle or wet fly in yellow or orange can do a good job imitating these swimming/hatching duns. The females are full of eggs and they show through their abdomen, giving them a creamy color with a pink/orange cast to them. Many people consider them a Sulfur of sorts, as the males are pale yellow/creamy in color and hatch at “Sulfur Time”, but usually the “true Sulfurs” are considered to be the Invaria & the Dorothea. June is the peak Invaria Sulfur month on the Farmington, but the smaller Dorothea can linger in the colder waters of Riverton as late as early/mid August some years. Invaria run #12-16 (typically #16 here), and Dorothea are #16-20.

Seeing both olive/green & tan Caddis. The pupa are stilldoing well, especiallyin the mornings & afternoons in faster water, and will vastly outfish dries during this phase of the hatch as trout typically feed on the pupa subsurface- wets & dries will work well during the evening egg-laying, and I often continue to do well on pupa in the eves too (imitating diving egg layers maybe?). I would say there are currently at least 4-5 different Caddis hatching, maybe more- from a #14 down to a #20 in assorted colors. Dead-drift the pupa, but then let them swing up at the end. Strikes can come at any point. If you have some #14-16 pupa in tan and olive/green colors that will cover a lot of bases. Wet flies & soft hackles in Caddis colors can be very effective when they are hatching or egg-laying. On the Farmington, mid to late SpringCaddis hatches typically occur in the mid/late morning to mid afternoon time slot (can be earlier in the morning when air temps are higher), and egg-laying (which generally creates most of the Caddis dry fly action) is typically in the evening when the light levels drop. FYI weather affects things and insect hatching time slots are not set in stone- heat, cold, cloud cover, sunshine and rain all can change this. Medium to fast choppy water is generally where the Caddis both hatch & egg lay.

Flow:
The Farmington is running medium-high and dropping, relatively clear at a total flow of 625cfs this morning in the permanent TMA/Catch & Release (C&R). It is 282cfs below the dam in Riverton, and the Still River is adding in 343cfs and dropping – it dumps in a little below the Rt 20 bridge in Riverton. The Still River currently runs warmer (50s/60s) than the water from the dam (mid/upper 40s) this time of year, and so currently it has a positive affect on water temps (raises them). As of Monday the East Branch is releasing an additional 150cfs about 3/8 of a mile below UpCountry. Unionville USGS gauge is 1,270cfs and dropping this morning- that’s a high flow for down there. Riverton water temp was 47 degrees at 8am, yesterday afternoon it reached 48.5 degrees at the Riverton gauge (water temps are higher downriver, and can reach mid/upper 50s currently).

Posted by UpCountry Sportfishing at 10:04 AM