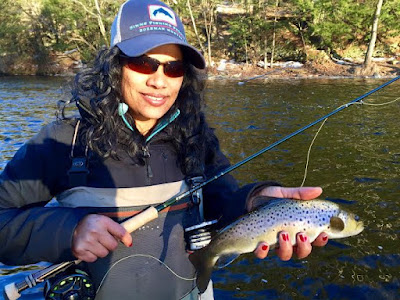 Severals items of interest:
Rich Strolis' new book "Catching Shadows- Tying Flies for the Toughest Fish and Strategies for Fishing Them" just arrived, it covers 20 of his best original fly patterns, and it's fantastic. Not only is there superb photography (done by Rich himself) with great step-by-steps, but he also give you the rationale for developing the fly and how/when to fish it. He will be doing a book signing for us Sunday February 7th, noon to 3pm. I'll be putting up some spring clinics for nymphing with Aaron Jasper, and a tying class on Saturday January 30th by Steve Culton on "Wet Flies and Fuzzy Nymphs for the Farmington River", so keep your eyes out. I should have Culton's class up by the end of today, it'll be under Events/Classes, and I'll also put it on our FaceBook page. We are once again stocked up with Tungsten Squirmy Worms in a variety of colors. Just got in big orders from Hareline & Rumpf, so take a peek in the tying materials section, we filled in some holes and added in some new materials.

Fishing remains good to excellent for many anglers the past several days, with fish coming to nymphs, dries & streamers. I had a very productive afternoon Thursday, and the trout were really keying into olive Caddis Larva, that fly caught the majority of my fish (take a look on our Facebook page from last week, I posted a very cool video of a piece of wood I pulled out of the water that was literally CRAWLING with Caddis larva). Pitured is Mandy with a typical fish from yesterday, they were 100% browns. We also picked up fish on Rubber Legs & assorted hot-spot nymphs. The return to colder nights has the morning Winter Caddis hatch improved, and highs pushing into the 40's has kept fishing pleasant. Water temps are averaging mid/upper 30's, varying with the day, time of day, and distance below dam. Current total flow in the permanent TMA (Catch & Release section) is estimated at about a medium level of 250cfs, clarity is very good. Still River USGS flow gauge is frozen up, so I'm guesstimating about 50cfs or so from the Still. Mild temps continue through the weekend, with highs in the 40's for today & Saturday, and Sunday will see 55 degrees. Highs move back into the 30's after this weekend. Some fish have moved into winter lies (slower/deeper water), but some are still spread throughout the river in medium-slow to medium-fast water. I'd skip the faster water, but there are still some trout in the pocket water in some of the softer/deeper pockets, in the riffles, and in the runs. Look for current edges, depressions, drop-offs & structure- basically anywhere there is a break from the faster current combined with some depth. In the winter, due to slower metabolisms due to colder water and less bugs hatching, the trout don't have to eat as much, so safety and staying out of the heavier current become their priorities. While the Winter Caddis hatch was very light most of December, the return to semi-normal winter weather should pick the hatch up this month, we've already had some good reports. Typically that hatch is an early to mid morning deal, but that can vary depending upon the day, with winged adults often on the water after the hatch. With water temps in the 30's now,  the trout are moving into their more typical winter lies- this means slow to moderate speed water with some depth. They will often pod up, so where you find one, there may be a bunch more. Nymph slow & deep and expect strikes to be subtle. Get your streamers well down into the water (using weighted flies, split shot, sinking leaders, or sink-tips/sinking lines) column and don't fast strip them, but rather swing, twitch, and slow retrieve them. Due to the slower water you will be fishing combined less aggressive presentations, don't use to much weight or too fast sinking of a line or you will hang up on the bottom a lot. Slow streamer presentations mean that you fly will fish deeper than normal. If you fish a weighted fly on a 200 grain line, you will have to fish it way too fast to keep it from snagging. Winter trout like their streamers slow, deep & easy to catch.

Our apartment is now closed for the season, and will be available again starting in April 1, 2016.
Posted by UpCountry Sportfishing at 9:43 AM