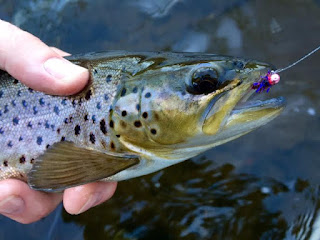 One of many brown trout landed last Thursday- most ate an Olive Caddis Larva, but this one ate a gaudy nymph. Well we received a serious shot of rain Sunday, I'd guesstimate at close to the 2" mark. 2015 was a very dry year, so I'll take any precipitation we get to get the water table & reservoirs back to normal. Flow in Riverton above Still River is a medium & very fishable 250cfs, downstream the total flow is signficantly higher at 901cfs & dropping. The extra flow is coming in from the Still, she just started dropping but once started the drop is fast. Currently your best conditions will be from Hitchcock (Rt 20 bridge) up to the dam, above the Still River, river is still nice & clear near the dam. Total flow should be substantially lower & clearer in a day or two, she drops fast and clears even faster. Look for water temps averaging mid/upper 30's. 10 Day Forecast sees highs averaging in the 30's, with lows in the teens & 20's. The return to colder nights has the morning Winter Caddis hatch improved, we've already had some good 2016 reports. Typically that hatch is an early to mid morning deal, but that can vary depending upon the day, with winged adults often on the water after the hatch in late morning/early afternoon. Trout are now starting to move mostly into winter lies (slower/deeper water). I'd skip the faster water, but there are still some trout in the pocket water in some of the softer/deeper pockets, moderate riffles, and softer/deeper runs. Look for current edges, depressions, drop-offs & structure- basically anywhere there is a break from the faster current combined with some depth. In the winter, due to slower metabolisms due to colder water and less bugs hatching, the trout don't have to eat as much, so safety and staying out of the heavier current become their priorities. They will often pod up in the frigid water of winter, so where you find one, there may be a bunch more. Nymph slow & deep and expect strikes to be subtle. Get your streamers well down into the water (using weighted flies, split shot, sinking leaders, or sink-tips/sinking lines) column and don't fast strip them, but rather swing, twitch, and slow retrieve them. Due to the slower water you will be fishing combined less aggressive presentations, don't use to much weight or too fast sinking of a line or you will hang up on the bottom a lot. Slow streamer presentations mean that you fly will fish deeper than normal. If you fish a weighted fly on a 200 grain line, you will have to fish it way too fast to keep it from snagging. Winter trout like their streamers slow, deep & easy to catch.

Our apartment is now closed for the season, and will be available again starting in April 1, 2016.
Posted by UpCountry Sportfishing at 9:06 AM