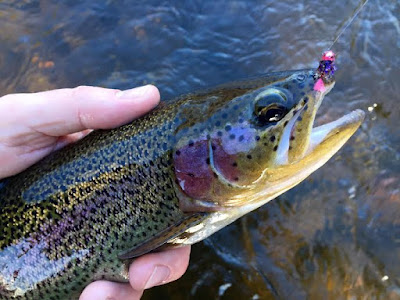 A very colorful Farmington winter rainbow from my last 2015 outing on Thursday, this one couldn't resist a nymph with some pink in it. A little "hot-spot" of some color in your nymphs sometimes really does the trick, especially in the winter. Quite a few good reports over the past weekend from the nymphers, with some very nice fish caught. Some trout were landed on dries & streamers too. Current total flow in the permanent TMA (Catch & Release section) is 327cfs & clear. This is a medium/normal level for this time of year, historical USGS Median Flow for today's date is 333cfs Cold for Monday/Tuesday this week (highs in 20's), getting much milder Wednesday through Sunday (highs averaging in the 40's). Some fish have moved into winter lies (slower/deeper water), but many are still spread throughout the river in medium-slow to medium-fast water. I'd skip the fastest water, but there are still some trout in the pocket water in some of the softer/deeper pockets, in the riffles, and in the runs. Look for current edges, depressions, drop-offs & structure- basically anywhere there is a break from the faster current combined with some depth. In the winter, due to slower metabolisms due to colder water and less bugs hatching, the trout don't have to eat as much, so safety and staying out of the heavier current become their priorities. While the Winter Caddis hatch was very light most of December, the return to semi-normal winter weather should pick the hatch up, they are used to hatching after colder nights. Typically that hatch is an early to mid morning deal, but that can vary depending upon the day, with winged adults often on the water after the hatch. As water temps drop into 30's the trout will start to transition into their typical winter lies- this means slow to moderate speed water with some depth. They will often pod up, so where you find one, there may be a bunch more. Nymph slow & deep and expect strikes to be subtle. Get your streamers well down into the water (using weighted flies, split shot, sinking leaders, or sink-tips/sinking lines) column and don't fast strip them, but rather swing, twitch, and slow retrieve them. Due to the slower water you will be fishing combined less aggressive presentations, don't use to much weight or too fast sinking of a line or you will hang up on the bottom a lot. Slow streamer presentations mean that you fly will fish deeper than normal. If you fish a weighted fly on a 200 grain line, you will have to fish it way too fast to keep it from snagging. Winter trout like their streamers slow, deep & easy to catch.

Winter Caddis #20-24 are hatching in the mornings, and in the afternoons we are seeing Midges #22-32- they will both hatch straight through the winter. With overall cooler weather here now, look for morning Winter Caddis hatches to improve (the mild temps most of December kept the hatch lighter than normal). If you are nymphing in the early to mid mornings, try egg patterns, Squirmy Worms & big stoneflies, and pair those up with a smaller nymph in the #16-20 range. Streamers are another good choice in the mornings, but fish them slow & deep, don't rip them in fast like you would in May or October as water temps are colder now and trout are more lethargic, make it easy for them to "catch" your fly- try swinging, twitching, and slow retrieving them. If your primary goal is numbers, go with medium sizes (#6-8), or go larger if you want a crack at the biggest trout, but are willing to catch less and forgo some of the average fish. Assorted smaller nymphs in the #16-20 range are some of the more consistent fish catchers right now- try Flashback WD-40's, Zebra Midges (black, red), and Pheasant Tails. Caddis Larva in #14-16 too, there are TONS in the river, and they fish well in wintertime. Also try attractor nymphs in #12-18 (Prince, Rainbow Warrior, Yellow Sparkle Prince, Lightning Bug, hot-spot patterns, etc.), some days they will do the trick when trout ignore drabber more natural patterns.

Our apartment is now closed for the season, and will be available again starting in April 1, 2016.
Posted by UpCountry Sportfishing at 9:17 AM