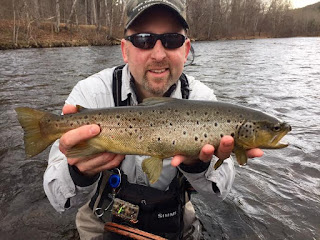 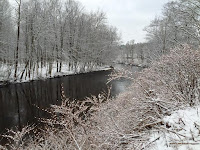 A dash of snow overnight gives us a pretty picture this morning, but afternoon sunshine and a predicted high of 47 degrees will have it gone well before mid-afternoon. Caught this perfect brown last Thursday, not a mark on in- perfect fins, intact adipose, no dye mark. This week looks great, with highs from upper 40's to low 60's, Long Range averages in the 50's. Water flow is a near perfect medium and very wadeable 297cfs. Water temps of late have run from low to upper 40's (slightly cooler in upper 2 miles below dam/above Still River). Trout are starting to move around with warming temps, they aren't all stacked up in pools, they are spreading out into the runs, moderate riffles, and softer/deeper pocket water. At this level you can wade just about anywhere, and you are more likely to encounter rising trout.

I misidentified a small mayfly in my last report- I thought I was seeing Baetis Vagans/Tricauditus (bigger early season #16-18 Olive) last week, but in fact when I looked closely at the photos I took they were #18 Paraleps, aka Blue Quills/Mahogany Duns. Still seeing Winter Caddis hatching in the mornings, and in the afternoons (especially on milder days) there are Early Black Stones, Midges, Paraleps, and some days small Olives (#22-26). #18 flashback Pheasant Tails can be very effective in March, probably imitates Paraleps and Baetis. A #14 medium to dark brown mayfly style nymph imitates the immature Hendrickson nymphs, which are getting more active and ending up in the behavioral drift. We just received a partial order of Rich Strolis flies from MT Fly Co., and we have some of his bad-ass Dark Brown Quilled Jig's he does, they will work well to imitate the Henny nymphs. Some of his big stoneflies arrived too (#10 Dimmer Stones), along with his DDT nymphs in both olive & brown (they both have hot-spots on them). Pictured are some of what we just got in. 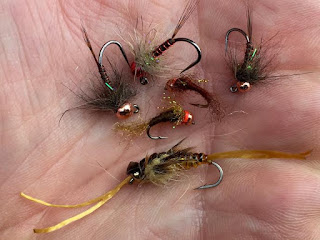 Olive/green Caddis larva, Princes, egg flies, and #8-16 Stones (black, brown, golden/yellow) are all still prime fish-catchers. Streamers fished slow & deep can be effective now too, try also trailing a #14-16 nymph 18" off the streamer's hook bend. With water temps averaging somewhere in the 40's, it's important to slow your streamer presentations down, make it easy for the trout to eat your fly. Seeing plenty of Early Black Stones popping in the #12-16 range, a Prince nymph in that size range can be a great imitation.

The river was stocked about 3 weeks ago from the dam in Riverton down to Whittemore (just above the Campground), and from just below the Rt 219 bridge in New Hartford down to the Mini-Golf in Collinsville/Unioville. The permanent C&R section (Campground to Rt 219) will get stocked sometime shortly after Opening Day in April. There were already plenty of trout all over the river, so this will only make the fishing better. The recently stocked trout will be the easiest to catch, the holdovers/wild ones will be pickier but bigger. It's good to have options. For the fresh stockers, the 'ol Woolly Bugger in black, olive or white is pretty deadly- experiment with colors, it can make a BIG difference sometimes and can change during the day. Various nymphs, especially egg flies, are also quite effective on recently stocked trout.

Fishing has been good in the stocked areas for browns & bows averaging 12-14". With a good chunk of the river freshly stocked now, it should help spread the pressure out, instead of all anglers congregating in just the 6 miles of the permanent C&R section. Don't be afraid to venture outside your comfort zone, as there are literally trout everywhere. Ive been getting good reports from the dam in Riverton all the way down to Collinsville/Unionville, on both stockers & holdovers/wilds. There are 21 miles of the Farmington River currently open to fishing until opening day April 9th (6am 2nd Saturday). Mild weather is bringing us hatches of Early Black Stones (#12-16).When the Early Black's pop, they often skitter along the surface, sometimes leading to explosive rises. Prince nymphs & Pheasant Tails in that size range can be deadly underneath. Try both dead-drift & skittering with the stonefly dries, often the trout will only hit ones that are moving. Overall I've had my most consistent success by nymphing with two flies in medium-slow to medium speed water around drop-offs, current breaks/current edges and submerged structure (rocks/trees).

Fishing has been good to excellent many days (not all) this winter, especially for the skilled nymphers, but trout have been eating dries & streamers as well. Early Black Stones (#12-16), Paraleps/Blue Quills/Mahogany Duns (#18), Olives (#22-26), Midges (#22-32) and Winter Caddis (#20-24)  hatch have been providing dry fly fishing on the warmer days. The Winter Caddis hatch is an early morning to early afternoon hatch this time of year., Mild afternoons that aren't too windy can bring Paraleps/Blue Quills/Mahogany Duns, small Blue Wing Olives & Midges with some trout feeding on the surface in the larger pools some days. Our nymphing crew has been scoring with Green/Olive Caddis Larva #14-16, Hendrickson-type nymphs #12-16 (brown mayfly nymphs such as Strolis Dark Brown Quilled Jigs, Pheasant Tails, Brown Euro Jigs, Heavy Hitter PT's, etc.), Princes #12-18, Stoneflies #8-16 (brown, black, golden/yellow), Cased Caddis #12-14, Quasimodo & Flashback Pheasant Tails #12-18, Zebra Midges #16-20 (black, red, olive), small Egg Flies, Squirmy Worms, Rainbow Warriors #16-18, and  Hot Spot Nymphs #12-16. Don't be afraid to fish bigger #8-10 Stoneflies in golden or brown, there a plenty of the matching naturals in the river, they are on a 2-3 year underwater life cycle. A big stone may not pull the most trout on a given day, but it often pulls the fish of the day. 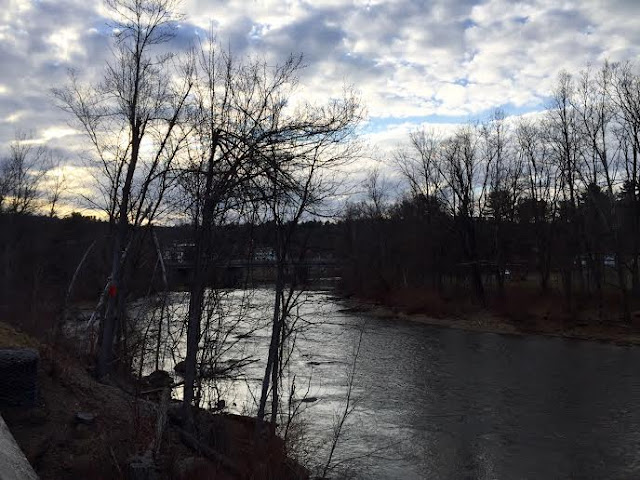 Posted by UpCountry Sportfishing at 9:54 AM