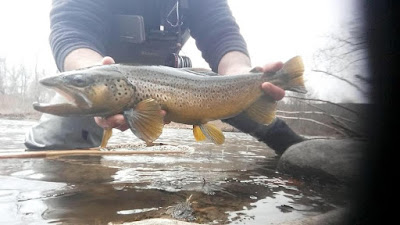 We will be open Easter
Sunday from 6am to 3pm. Sneak out and fish before you celebrate Easter with the family. Guide Zach St Amand back-to-backed these two 20" plus Farmington River trout Wednesday. The brown is 100% wild, looks just like a big MT or Delaware River wild fish. The rainbow was a tank, even bigger than the brown. He took these in the span of 3 casts! And a 16" brown, all in the span of 10 casts. One on a Golden Stone nymph, one on a #16 olive nymph. The brown, of course, ate the bigger Stonefly nymph. I did well Wednesday too, plenty of trout to the net on various nymphs, but none as big as Zach's! FYI I'm starting to hit trout in some fairly fast water in the afternoons.

Fishing has been good all up & down the river, water temps hit 48 degrees downriver on Wednesday afternoon. This is making the trout active, and I'm sure early spring hatches like the Hendrickson will be earlier than normal. Total flow in permanent C&R section is a very nice 261cfs (161cfs from the dam in Riverton, plus 110cfs from the Still River). Weekend weather looks great, with highs near 60 degrees, mix of sun & clouds, no rain. Plenty of Early Black Stones hatching most days, plus Winter Caddis in the morning, and Paraleps & Midges in the afternoons. Thus far most of the feeding on the Stones has been subsurface on the nymphs, but they do rise to the adults sometimes. Often you have to skitter the dry fly to get an eat- the natural are very active and bounce all over the water.
Olive/green Caddis larva, Princes #12-16 (work great for Early Stones), #16 Olive nymphs, #12-18 Quasimodo Pheasant Tails, #10-14 Strolis dark brown Quilled Jigs, egg flies, and #8-16 Stones (black, brown, golden/yellow) are all prime fish-catchers. Streamers (black, olive, white, brown) fished slow & deep can be effective now too, try also trailing a #14-16 nymph 18" off the streamer's hook bend.

The river was stocked at the very beginning of March from the dam in Riverton down to Whittemore (just above the Campground), and from just below the Rt 219 bridge in New Hartford down to the Mini-Golf in Collinsville/Unioville. The permanent C&R section (Campground to Rt 219) will get stocked sometime shortly after Opening Day in April. There were already plenty of trout all over the river, so this will only make the fishing better. The recently stocked trout will be the easiest to catch, the holdovers/wild ones will be pickier but bigger. It's good to have options. For the fresh stockers, the 'ol Woolly Bugger in black, olive or white is pretty deadly- experiment with colors, it can make a BIG difference sometimes and can change during the day. Various nymphs, especially egg flies, are also quite effective on recently stocked trout.

Fishing has been good in the stocked areas for browns & bows averaging 12-14". Plenty of holdovers and even some wild trout are mixing in with the recent stockers. With a good chunk of the river freshly stocked now, it should help spread the pressure out, instead of all anglers congregating in just the 6 miles of the permanent C&R section. Don't be afraid to venture outside your comfort zone, as there are literally trout everywhere. Ive been getting good reports from the dam in Riverton all the way down to Collinsville/Unionville, on both stockers & holdovers/wilds. There are 21 miles of the Farmington River currently open to fishing until opening day April 9th (6am 2nd Saturday). Mild weather is bringing us hatches of Early Black Stones (#12-16).When the Early Black's pop, they often skitter along the surface, sometimes leading to explosive rises. Prince nymphs & Pheasant Tails in that size range can be deadly underneath. Try both dead-drift & skittering with the stonefly dries, often the trout will only hit ones that are moving. Overall I've had my most consistent success by nymphing with two flies in medium speed water around drop-offs, current breaks/current edges and submerged structure (rocks/trees). 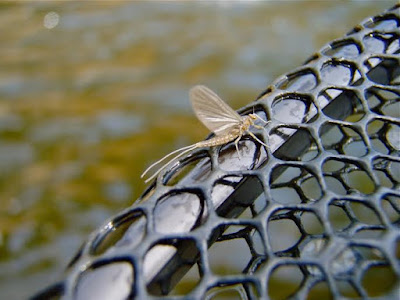 Posted by UpCountry Sportfishing at 2:21 PM