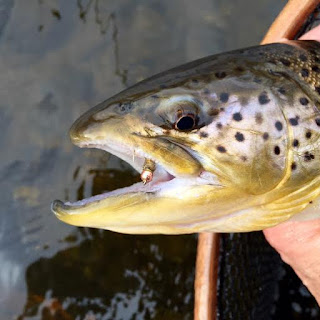 Cool head shot of a brown I caught during my last outing, fishing was good that day! Many, many good reports and smiling anglers this past weekend. Nymphers scored the best, but there were a good number of trout feeding on top, and streamer fishing is really starting to turn on. I would not call it a legitimate "hatch" as yet, but I got a credible report (with a picture to back it up) of a few Hendrickson's hatching in Unionville on Sunday (very light still, not many). The hatch still needs a few days to develop, and it will move slowly upriver. Look for a fishable hatch in the permanent Catch & Release section sometime in early April this year, the mild winter & spring has the hatches ahead of schedule- it takes are week or two for the hatch to move from Unionville to New Hartford/Pleasant Valley. Even if you don't see any hatching, fishing a #12-14 Hendrickson-type nymph (read that as a brownish mayfly nymph) will be an excellent choice now, as they end up in the Behavioral Drift early & late in the day, plus they can also pass as an Early Black or Brown Stone. We are seeing plenty of Early Black Stones hatching every day, anywhere from the later morning through late afternoon. If you are nymphing now, don't be afraid to fish the faster water, especially in the afternoons on warmer, sunny days- as water temps rise, the both bug activity & the trout's metabolism rise, causing many to move into the current to feed. Fast water = more food delivered to the trout at a faster rate. With water temps getting into the upper 40's on milder afternoons, this is triggering some serious subsurface feeding from the trout. Spring sees the greatest underwater biomass of aquatic insects, and the trout take full advantage of it. So should you! Holdovers and especially wild trout are more apt to hang in heavier current to feed, recently stocked fish are more apt to hold in medium slow water 2-3 feet deep, just like they lived in at the fish hatchery their whole life.

Fishing has been good all up & down the river, from the dam in Riverton all the way down to the Rt 177 bridge in Unionville (remember that is the downstream boundary of legal fishing until 6am on April 9th, Opening Day for CT). Don't limit yourself to only the more popular & more crowded sections of the river, as there is literally excellent fishing all over the river. Total flow in permanent C&R section is a very nice and very wadeable 259cfs (161cfs from the dam in Riverton, plus 98cfs from the Still River).  Plenty of Early Black Stones hatching most days, plus Winter Caddis in the morning, and Paraleps, Baetis & Midges in the afternoons. Thus far most of the feeding on the Stones has been subsurface on the nymphs, but they do rise to the adults sometimes. Often you have to skitter the dry fly to get an eat- the natural are very active and bounce all over the water. Olive/green Caddis larva, Princes #12-16 (work great for Early Stones), #16 Olive nymphs, #12-18 Quasimodo Pheasant Tails, #10-14 Strolis dark brown Quilled Jigs, egg flies, and #8-16 Stones (black, brown, golden/yellow) are all prime fish-catchers. Streamers (black, olive, white, brown) fished slow & deep can be effective now too, try also trailing a #14-16 nymph 18" off the streamer's hook bend.

The river was stocked at the very beginning of March from the dam in Riverton down to Whittemore (just above the Campground), and from just below the Rt 219 bridge in New Hartford down to the Mini-Golf in Collinsville/Unioville. These browns & rainbows are averaging 12-14", with a few even bigger than that. The permanent C&R section (Campground to Rt 219) will get stocked sometime shortly after Opening Day in April. There were already plenty of trout all over the river, so this will only make the fishing better. The recently stocked trout will be the easiest to catch, the holdovers/wild ones will be pickier but bigger. It's good to have options. For the fresh stockers, the 'ol Woolly Bugger in black, olive, brown or white is pretty deadly- experiment with colors, it can make a BIG difference sometimes and can change during the day. Various nymphs, especially egg flies, are also quite effective on recently stocked trout. Plus rainbows spawn in March, along with Suckers, both adding real eggs to the drift.

Hatchwise look for:
Early Black Stones (#12-16), Paraleps/Blue Quills/Mahogany Duns (#18), Baetis (bigger Olives) #16-18, small Olives (#22-26), Midges (#22-32) and Winter Caddis (#20-24)  hatch have been providing dry fly fishing on some of the warmer days. The Winter Caddis hatch is an early morning to early afternoon hatch this time of year., Mild afternoons that aren't too windy can bring Paraleps/Blue Quills/Mahogany Duns, small Blue Wing Olives & Midges with some trout feeding on the surface in the larger pools some days. Our nymphing crew has been scoring with Green/Olive Caddis Larva #14-16, Hendrickson-type nymphs #12-16 (brown mayfly nymphs such as Strolis Dark Brown Quilled Jigs, Pheasant Tails, Brown Euro Jigs, Heavy Hitter PT's, etc.), Princes #12-18, Stoneflies #8-16 (brown, black, golden/yellow), Cased Caddis #12-14, Quasimodo & Flashback Pheasant Tails #12-18, Zebra Midges #16-20 (black, red, olive), small Egg Flies, Squirmy Worms, Rainbow Warriors #16-18, and  Hot Spot Nymphs #12-16. Don't be afraid to fish bigger #8-10 Stoneflies in golden or brown, there a plenty of the matching naturals in the river, they are on a 2-3 year underwater life cycle. A big stone may or may not pull the most trout on a given day, but it often pulls the fish of the day, especially the big browns.
Posted by UpCountry Sportfishing at 9:31 AM