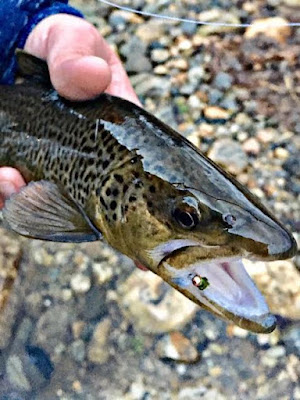 We are now back to our usual in-season hours: 8am-6pm weekdays, 6am-5pm weekends.

Check out the head on this male Farmington River brown trout caught by friend/customer Michael Andrews. It would hurt to get bit by that one!

Quite a few peeps out Saturday, and depending on the person and where they fished, some people wracked them up, and some struggled. Best fishing by far is still in the recently stocked areas, especially from Whittemore to the dam (upper 4 miles of the river), they are more active than the holdover trout in the permanent TMA /Catch & Release (C&R) section. It's a quality over quantity deal in the permanent C&R- don't expect big numbers, but expect high-quality fish. Access since the big snow has been an issue for some areas, as they only plowed some parking lots, and almost no pull-offs. But now, the mild weather with rain/fog here now will take care of that fast. Total flow through the C&R area in Barkhamsted is a nice and easily wadable 258cfs (136cfs at USGS Riverton gauge, plus 122cfs from the Still River).

Overall, smaller flies, especially Midge Pupa/Larva sz 18-20, are doing the best. This is especially true upriver in Riverton. Midge have been the most active bug of late, so no surprise there. Peak Midge hatching has normally been early to mid afternoons. With milder temps coming now (mostly highs in the 50s starting Tuesday, nights in the 30s), you should see the Stonefly hatching ramp up, with the somewhat bigger #14-16 Early Black & Early Brown Stones joining the black micro stones (sz 20-24) we've been seeing. FYI, subsurface, Hendrickson nymphs start getting active a good month plus before the hatch, so a #14 medium to dark brown nymph can be the ticket sometimes, especially for the holdover & wild browns.

We have been receiving mass quantities of various products literally every day, we just unpacked 2 big boxes of fly tying materials that arrived from Wapsi, plus a big Hareline order tht arrived earlier in the week.

With normal flows here lately, some larger sized nymphs (#14-16) are working, along with the smaller #18-20 Midge Pupa/Larva & Pheasant Tails that have been so effective the past month. Even some good reports on big #8 Mop flies lately too, especially on the recent stockers. Bigger Stones #8-12 are pulling less but bigger fish. If you are looking for rising trout, target the soft water in the big wide pools (generally Caddis in AM, and Midges & Stones in afternoons, but that is a very general rule and varies from day to day).

Winter & Early Stones are all hatching, especially on milder/sunny days- Tiny/Micro Winter Black Stone #18-24, Early Black Stonefly #14-16, and Early Brown Stonefly #14-16. Trout do rise to the Stoneflies when conditions are favorable and we have some great flies here tied by our own Don Butler & Bruce Marino to imitate them, however, the nymph imitations are more consistent producers. Bruce has a new Early Black Stonefly nymph pattern out that we just put in the fly bins. that has been working well. For Midge larva & pupa nymphed deep, think black, olive, red, or yellow (yellow doubles as an imitation of certain small Caddis larva too).

The new book "Nymphing The New Way: French leader fishing for trout" is in stock again- it focuses on Euro-style nymphing using very long leaders, which is deadly indeed. The first 2 batches sold out fast. Keep your eye out for "Nymph Masters" by Jason Randall coming out in early April (they keep changing the release date though).
Posted by UpCountry Sportfishing at 8:47 AM