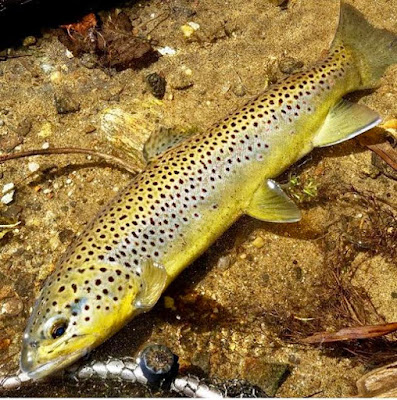 Andy Lyons with some fish porn for us from Thursday, plus a brief report. He said the early morning started out below freezing & slow, but as things warmed up, so did the water temps & nymphing, he ended up doing well. FYI he was in the permanent Catch & Release area. Lately the best fishing generally seems to be late morning through mid afternoon. I was out on Wednesday when the water came up, and I struggled during the day, but worked very hard, moved around, and finally ended up with a handful of trout landed. The mild weather & rain over the past week has made most of the normal parking areas finally usable again, many were snowed in for quite a while before this. This will open up a bunch more spots where the trout have not yet been pummeled. Remember that water temps are still cool to cold, so most trout are in slow to medium speed water with some depth, and not so much in the fast water. (with occasional excpetions). Maybe on the EDGE of it or in softer/deeper pockets, but not IN the fast stuff. During sunny and mild afternoons when you get a rising water temp and bug activity, trout have been moving into moderate speed riffles to feed on pupa, larva & nymphs.

I checked the water level at Colebrook Reservoir twice this past week. I hadn't seen it in almost 2 months, and as of Monday it must have come up 50+ feet in vertical height since late January, it was maybe 30 feet below the level of the boat launch parking lot. Yesterday (Thursday) it had come up yet another 10 feet or so, which makes me happy. It would be nice to start the spring season with a reservoir full to capacity in case we get another dry year. For those of you planning out your fishing this weekend, Sunday looks the best by far- sun & clouds with a high of 51, not too windy either!

The most concsistent fishing lately is still upriver from above the Still River up to the dam. And the most consistent flies remain Midge larva & pupa #18-20 or so (black, olive, red, brown). The permanent Catch & Release area (TMA/C&R) has been spotty many days, with most anglers working very hard for every fish. As flow drops and we get milder weather again, expect bug activity & fishing to both improve there. It's a quality over quantity deal in the permanent C&R- don't expect big numbers, but expect some higher-quality and bigger fish. Best flows right now are upriver ABOVE the Still River (first 2 miles below the dam), it's a very moderate 169cfs at the USGS Riverton gauge. Total flow in permanent Catch & Release (Pleasant Valley/New Hartford) is a moderately high but fishable 557cfs, with the Still River contributing 388cfs of that. Historical normal/median USGS total flow for permanent C&R section today would be a high 747cfs, so we are in better fishing shape than normal for the last day of March.

With normal flows here lately, some larger sized nymphs (#14-16) are working, along with the smaller #18-20 Midge Pupa/Larva & Pheasant Tails that have been so effective the past month. Even some good reports on big #8 Mop flies lately too, especially on the recent stockers. Bigger Stones #8-12 are pulling less but bigger fish. If you are looking for rising trout, target the soft water in the big wide pools (generally Caddis in AM, and Midges & Stones in afternoons, but that is a very general rule and varies from day to day). Other good nymph choices for this season include Prince Nymphs and Quasimodo Pheasant Tails, Hot Spot Nymphs such as the Triple Threat, Frenchie, Rainbow Warrior. Squirmy Worms and Egg patterns are also great choices.

The new book "Nymphing The New Way: French leader fishing for trout" is in stock again- it focuses on Euro-style nymphing using very long leaders, which is deadly indeed. The first 2 batches sold out fast. Keep your eye out for "Nymph Masters" by Jason Randall coming out in early April (they keep changing the release date though).
Posted by UpCountry Sportfishing at 8:58 AM