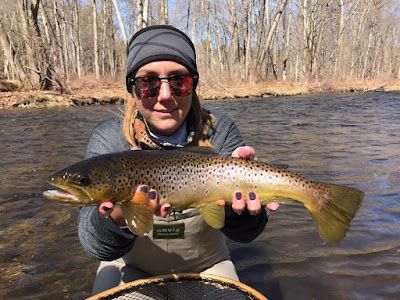 Guide Derrick Kirkpatrick of CT Fish Guides took out Chris & Jordan Sunday, and pictured is Jordan's first Farmington River trout, what a great brown. I'm pretty sure those two will be back! I headed upriver after work Sunday, and fished off the bank for an hour or so. Picked up a half dozen trout on assorted nymphs, and there were a bunch of other anglers out & about and most of them were catching fish too on nymphs, streamers, lures & bait. Water temps in Riverton were 36-37 degrees, I took a temp in the lower Still River (doesn't open to fishing until 4/8) and it was 42-43 degrees.

The highest quality fish (holdover & wild) have mostly come out of the permanent Catch & Release lately, but the best numbers by far have been upriver. Three CT DEEP Fisheries stocking trucks drove upstream by the shop Sunday morning, rumor has it they hit the upper 4 miles in Riverton (above Campground from Whittemore to the Dam) AGAIN, they had already hit it good on 3/13. Typically they load the river once in March, and then again the week before Opening Day, and then almost weekly until late May. Should be good! As I've mentioned before, the Permanent C&R/TMA doesn't get stocked until 1-2 weeks after Opening Day (6am Saturday April 8th this year)- there are lots of trout in that section, but you have to work a little harder to catch them. With the milder temps coming, look for the permanent Catch & Release in Pleasant Valley/New Hartford as well as downstream to pick up. Recently it's been a quality over quantity deal in the permanent C&R, with patient fisherman picking up some very nice trout.

Lately the best fishing has typically been late morning through mid afternoon, which correlates with Midge activity. Remember that water temps are still cool to cold, so most trout are in slow to medium speed water with some depth, and not so much in the fast water. (with occasional exceptions). Maybe on the EDGE of it or in softer/deeper pockets, but not IN the fast stuff. During sunny and mild afternoons when you get a rising water temp and bug activity, trout have been moving into moderate speed riffles to feed on pupa, larva & nymphs. But as temps increase, some fish will move into the faster flows when bugs are active in the afternoons. Warming temps should also get the Early Stones active, they slowed down when it snowed & got colder.

Colebrook Reservoir  is now almost full, and at the rate water is coming into this week, I'm guessing it will hit 100% capacity before Opening Day. After the drought we've seen the past year or two, that's VERY good news.

The most consistent flies have been Midge larva & pupa #18-20 or so (black, olive, red, brown). The permanent Catch & Release area (TMA/C&R) has been spotty some days, with most anglers working for each fish- this will improve with the upcoming milder weather and corresponding rising water temps- expect bug activity & fishing to both improve. Best flows right now are still upriver above the Still River (first 2 miles below the dam), it's a very moderate 180cfs at the USGS Riverton gauge. Total flow in permanent Catch & Release (Pleasant Valley/New Hartford) is a moderately high but  still fishable 656cfs, with the Still River contributing 476cfs of that. Historical normal/median USGS total flow for permanent C&R section today would be a 776cfs. If you are downstream of the Still River, fish the bigger/wider pools that have more moderate flows.

With more water lately, some larger sized nymphs (#14-16) are working, along with the smaller #18-20 Midge Pupa/Larva & Pheasant Tails that have been so effective the past month. Even some good reports on big #8 Mop flies lately too, especially on the recent stockers. Bigger Stones #8-12 are pulling less but bigger fish. If you are looking for rising trout, target the soft water in the big wide pools (generally Caddis in AM, and Midges & Stones in afternoons, but that is a very general rule and varies from day to day). Other good nymph choices for this season include Prince Nymphs and Quasimodo Pheasant Tails, Hot Spot Nymphs such as the Triple Threat, Frenchie, Rainbow Warrior. Squirmy Worms and Egg patterns are also great choices.

The new book "Nymphing The New Way: French leader fishing for trout" is in stock again- it focuses on Euro-style nymphing using very long leaders, which is deadly indeed. The first 2 batches sold out fast. Keep your eye out for "Nymph Masters" by Jason Randall coming out in early April (they keep changing the release date though).
Posted by UpCountry Sportfishing at 9:41 AM