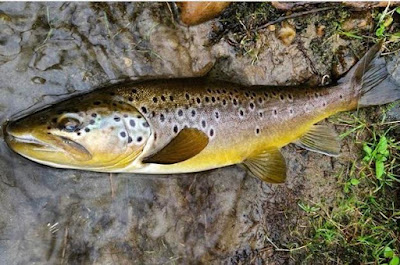 Fishing continues to pick up as water temps rise and the Hendrickson hatch works it's way upstream- check out this flawless brown Andy Lyons caught yesterday, one of many 16-19" holdovers & wilds he caught both inside & outside of the permanent TMA/Catch & Release, both subsurface on nymphs, and on top on emergers.

Hendrickson hatch has been going downriver this week (Unionville/Collinsville/Canton), and it's now up at least as far as the New Hartford section of the TMA/C&R, and will probably be all throughout the permanent TMA this weekend with the warm weather (Friday- 80 degrees, Saturday- 75). Come prepared for the hatch with nymphs, wets/soft-hackles, and dries (emergers, duns & spinners). The Hendricksons normally hatch from early to late afternoon, and the nymphs get very active a couple hours before the hatch. Spinner falls most commonly happen in the evenings- they prefer mild evenings that are not windy or rainy. Sometimes spinners fall in mid to late morning instead, especially if the evening conditions were not conducive. This hatch gets some of the biggest trout out & feeding.

The state stocked the permanent Catch & Release/TMA today (Friday) with the larger 14-18"+ Two Year Old Survivor Strain Brown Trout, and on 4/21 they put in the adult & yearlings. Last week the entire river from the dam in Riverton down to the Rt 4 bridge in Farmington was stocked. There are literally trout everywhere. Fishing has really improved lately, and not just because the whole river was stocked- many above average holdover and even some wild trout were landed both in and out of the permanent TMA/C&R. It's a combination of rising water temps & bug activity. We are seeing more & more bugs on mild afternoons including Hendricksons, Blue Wing Olives, small dark Caddis, Midges, Early Stoneflies, etc.

There is more and more bug activity everyday, with the bulk of it in the afternoons:  Hendricksons #12-14, Baetis/Blue Wing Olives #16-18, Early Stones #12-16, Midges  #20-26, and a few Paraleps/Blue Quills sz 18, plus assorted dark Caddis. If you find mayflies hatching & rising trout, emergers will usually outfish traditional dun dry flies- fish #12-14 Hennys in emergers, duns (both light & dark) & spinners (rusty). Hendrickson nymphs #12-14, Frenchies #14-18, Quasimodo Pheasant Tails #12-18, Caddis Larva #12-16 (olive, green), and Baetis/Blue Wing Olive nymphs #16-18, and bigger #8-12 Stonefly nymphs have been hot nymphs of late. Make sure to also try Attractor Nymphs #14-18, Mops, San Juan Worms/Squirmies, Green Weenies, and Egg Flies. Streamers have been very effective on both the fresh stocked trout and also the big holdover and wild fish. Experiment with colors & retrieves to find what will attract the trout.
Posted by UpCountry Sportfishing at 8:48 AM