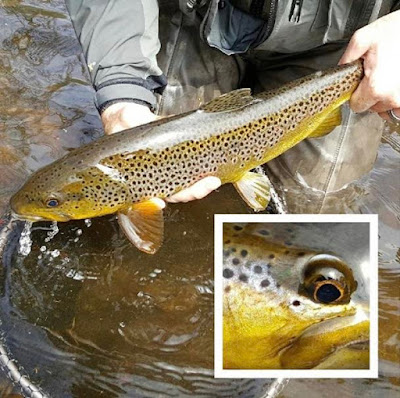 Another Farmington River Brown Trout success story: tank of a brown caught recently by Andy Lyons on a #22 Midge nymph, and the green elastomer tag/dye mark behind the right eye and fin clip show it was stocked in 2012 as a 1 year old adult. Not wild, but the next best thing, a FIVE YEAR holdover! These Survivor Strain browns are super healthy and hold over at a much higher rate than standard hatchery browns do. They also spawn and create truly wild progeny.

Hendricksons are the current glamour hatch, and are now most of the way up into the permanent Catch & Release (C&R)/TMA, and still hatching as far downstream as Unionville. This is an afternoon deal, usually coming off sometime between early & late afternoon, with a spinner fall in the evenings. However, sometimes the spinners mix with the afternoon hatch, and sometimes they fall in the mid/late mornings. The spinners are fickle and don't like cold temps, wind or rain. The hatch, however, comes off every afternoon regardless of the weather. Dunno why, but this is one hatch where the trout seem extra particular, so make sure to cover ALL stages/variations- nymphs, soft-hackles/wets, emergers/cripples, duns (light & dark), and spinners. If they don't rise where your are fishing, be prepared to fish nymphs and/or wets/soft-hackles- I catch some of my biggest trout on Hendrickson nymphs and #12-14 Pheasant Tails.

The state stocked the permanent Catch & Release/TMA last week with the larger & obese Two Year Old Survivor Strain Brown Trout, and on 4/21 they put in the adults/yearlings. The 2 Year Olds have a left eye red elastomer, and the yearlings/adults have a right eye orange elastomer- all have a clipped adipose fin. The entire river has been stocked top to bottom more than once now, and there are literally trout everywhere- if you don't catch fish now, you have no excuses anymore! Haha. Fishing has really improved lately, and not just because the whole river was stocked- many above average holdover and even some wild trout were landed both in and out of the permanent TMA/C&R. It's a combination of rising water temps & bug activity. We are seeing more & more bugs on mild afternoons including Hendricksons, Blue Wing Olives, small dark Caddis, Midges, Early Stoneflies, etc.

Total flow in the permanent Catch & Release is 369 cfs & dropping at 5:30pm update (normal for today's date is 421), with 256 cfs below Goodwin/Hogback Dam in Riverton, and the Still River adding another 113 cfs below Rt. 20 bridge in Riverton. As I suspected, the MDC cut the flow back by about 60 cfs today at 9am (Riverton gauge was reading 314 cfs this morning). Both upstream reservoir levels are fine (Hogback/Goodwin & Colebrook), and the inflow in MA is only 160 cfs, so that is why I guessed that. This will increase water temps slightly and also create more rising trout (lower flows = more risers). Water temps in the permanent Catch & Release/TMA have been reaching into the low 50's on a daily basis in the afternoons. Riverton (above the Still River) is still averaging low/mid 40s.

Most of the peak bug activity is in the afternoons, but depending upon the day you may see insects in the AM & PM:  Hendricksons & Hendrickson Spinners (rusty) #12-14, Baetis/Blue Wing Olives #16-18, Early Stones #12-16, Midges  #20-26, and a few Paraleps/Blue Quills #18, plus assorted small dark Caddis. If you find mayflies hatching & rising trout, emergers will often outfish traditional dun dry flies- fish #12-14 Hennys in emergers, duns (both light & dark) & spinners (rusty). Hendrickson nymphs #12-14, Frenchies #14-18, Quasimodo Pheasant Tails #12-18, Caddis Larva #12-16 (olive, green), Baetis/Blue Wing Olive nymphs #16-18, and bigger #8-12 Stonefly nymphs have been hot of late, especially in the AM. Make sure to also try Attractor Nymphs #14-18, Mops, San Juan Worms/Squirmies, Green Weenies, and Egg Flies. Streamers have been very effective on both the fresh stocked trout and also the big holdover and wild fish. Experiment with colors & retrieves to find what will attract the trout- olive, black, and white are good starting points, but also try brown, tan, and yellow or combinations thereof.


Posted by UpCountry Sportfishing at 9:32 AM