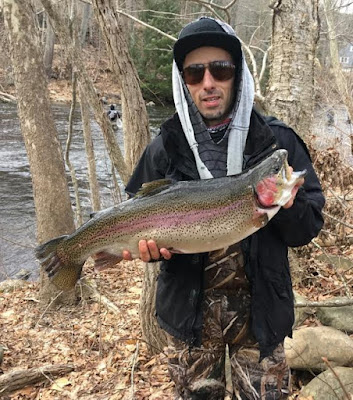 Boom! There the Riverton Fishing Derby winner from Saturday, a 10# 13oz, 26.5" beast of a Farmington River rainbow trout caught by customer Matthew Musumano. And uncharacteristically, it was caught on a fly- a Slumpbuster streamer (yes we sell them! haha). The next 2 biggest were 9# plus, and 8# plus. Looks like it's going to be a good year for big trout. Reports were mixed for Opening Day weekend overall- some hammered trout, some did fair to okay, and some blanked. Standard fare for the beginning of the season I'd say. The upper river is heavily stocked, but has been receiving very heavy angling pressure. The permanent Catch & Release is still a quality over quantity deal, but this will rapidly change as water temps continue to rise, hatches get going, and it will be stocked soon (sometime in the next week or two). 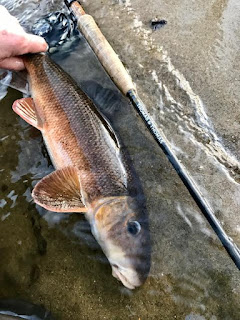 I fished again after work last night, and decided to hit the higher water downriver and avoid the crowds. I did not have another angler in sight, but I had to work hard. Picked up a rainbow and a "Native" (the kind with lips, aka a Sucker, haha). I saw quite a few assorted bugs in the air (small Caddis & Midges mainly), but no risers. Water temp was 45.5 degrees.

Flows, conditions and weather all continue to rapidly improve- total flow in the permanent Catch & Release (C&R/TMA) is down to medium-high & clear 514cfs and steadily dropping (normal/medium flow for today would be 745cfs), with 177cfs at the Riverton USGS gauge (by Rt 20 bridge), and the Still River adding in 337cfs and dropping. Warm weather this week (60s to 80s!) is warming up the cold water and getting the hatch cycle started up- a good Baetis (Blue Wing Olives) hatch was reported in the permanent C&R yesterday, and there were even a few rising. Expect bug activity and fishing to both pick up noticeably this week. Once water temps hit 50 degrees plus for a few days, expect to see the Hendrickson hatch start (I'd guess somewhere in late April for the permanent C&R/TMA).

The river has been stocked everywhere outside of the permanent C&R/TMA areas, and it's pretty much loaded with brown, rainbow & brook trout, even a few tiger & golden rainbow trout. Water temps were still cold earlier in the week, but with warmer weather and warmer water dumping in from the Still River, water temps should be going up quite a bit this week. FYI Riverton is running colder than the rest of the river right now due to the colder water released from the bottom of the reservoir above, and the Still River actually improves the early season water temps from there downstream. Despite the colder water, Riverton has fished well, mainly because it is stocked to the gills with trout, plus the flows have been consistent and moderate up there. The downside is fishing pressure there has been quite heavy.

The catch & keep sections of the river have been stocked with large breeder trout, which can range anywhere from a 2# brook trout to a 10-12# brown or rainbow! So don't be surprised to be catching a bunch of 10-15" recently stocked fish, and then suddenly your rod bends double and line starts peeling off your reel. 2016 Opening Day I landed a 26" rainbow after work on a small nymph, I released it but the length/girth measurements put it at over 8 1/2 pounds! And there are a few caught every year that are even bigger.

The highest quality fish (holdover & wild) have mostly come out of the permanent Catch & Release lately, but the best numbers by far have been upriver. Recently it's been a quality over quantity deal in the permanent C&R, with patient fisherman picking up some very nice trout. This will rapidly improve as the milder weather takes over, and soon that section will be well-stocked.

Remember that water temps are still on the cool side, so most trout are still in moderate speed water with some depth, and not so much in the fast water. (with some exceptions). Maybe on the EDGE of it or in softer/deeper pockets, but typically not IN the fast stuff. During sunny and mild afternoons when you get a rising water temp and bug activity, trout have been moving into moderate speed riffles to feed on pupa, larva & nymphs. But as temps increase, some fish will move into the faster flows when bugs are active in the afternoons. Warming temps should also get the Early Stones active, they slowed down when it snowed & got colder.

Colebrook Reservoir (the big one right above Hogback/Goodwin Dam and the more important one to look at) is now almost full, and at the rate water is coming in, it may now be full. After the drought we've seen the past year or two, that's VERY good news.

The most consistent flies upriver have been Midge larva & pupa #18-20 or so (black, olive, red, brown). Smaller Frenchies #16-18 have been good too. Below that, in the higher flows, go bigger/gaudier on your nymphs (#8-16) and fish streamers too. Bigger water = bigger flies. And sometimes bigger trout! Now is the time to fish "Junk Flies": Mops, San Juan Worms/Squirmies, Green Weenies, Egg Flies, etc. Bigger #6-10 Stonefly nymphs too. The permanent Catch & Release area (TMA/C&R) has been spotty some days, with most anglers working for each fish- this will improve with the milder weather and corresponding rising water temps as the river comes back down- expect bug activity & fishing to both improve.

Midges have been the most active bug of late, so it's not surprising they have been the best producer most days. Peak Midge hatching has normally been early to mid afternoons. We are now just starting to see the Baetis/Blue Wing Olives sz18 hatching in the permanent Catch & Release area, it's typically and afternoon deal. Milder temps should see the Stonefly hatching ramp up, with the somewhat bigger #14-16 Early Black & Early Brown Stones joining the black micro stones (sz 20-24) we've been seeing. FYI, subsurface, Hendrickson nymphs start getting active a good month plus before the hatch, so a #14 medium to dark brown nymph can be the ticket sometimes, especially for the holdover & wild browns.

Streamers can be very effective this time of year. Experiment with colors & retrieves to find what's best at any given moment (it changes). I would also try to make your presentations mostly slow & deep due to the cooler water temps, both swinging and slow retrieves are good choices. Experiment though, sometimes even in cold water the trout will respond to a fast retrieve, but overall in cold water temps they like it slower. Early spring is a great time for slowly swinging streamers, it's a fun & relaxing way to fish and cover water both thoroughly and efficiently.

The new book "Nymphing The New Way: French leader fishing for trout" is in stock again- it focuses on Euro-style nymphing using very long leaders, which is deadly indeed. The first 2 batches sold out fast. Keep your eye out for "Nymph Masters" by Jason Randall coming out in early April (they keep changing the release date though).
Posted by UpCountry Sportfishing at 8:57 AM