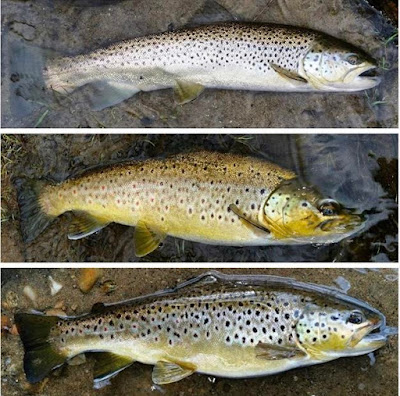 We will be open this Easter Weekend including Sunday from 6am-5pm. I like this triple frame shot by deadly nympher Andy Lyons, these were just 3 of quite a few holdover & wild trout caught the other day by him. He avoided the upriver stocked trout, and instead concentrated on the permanent Catch & Release, and downstream toward the lower river.

Trout are starting to hold in some moderately fast water now, so cover all the water before you change spots. Rumors are swirling of a FEW Hendricksons on the lower reaches of the river but I cannot personally confirm them. I'm guessing the last week of April will bring Hendricksons to the permanent C&R.

Afternoon Baetis/Blue Wing Olives have started hatching this past week, and we've been seeing Early Black Stones & small black Midges every afternoon. Most of the fishing is still subsurface with nymphs, streamers, and soft-hackles & wet flies. Water temps in Riverton above the Still River are low to mid 40's, the permanent C&R has been averaging mid to upper 40's, and Collinsville/Unionville will be slightly warmer during sunny afternoons. I actually got a temp of 56 degrees Tuesday night after work at the 219 bridge in New Hartford (that was the sunny day it hit mid/upper 80's).

Total flow in the permanent Catch & Release (C&R/TMA) is a moderately high but totally fishable 650cfs and steadily dropping, with 419cfs from the dam in Riverton, and the Still River adding in 196cfs below Riverton. The reservoir is now full, so the MDC is running a little extra water out of the dam to get Colebrook River Lake level down a bit. In March we were 30 feet down and still worried about the lake filling, and now there's plenty of water. This puts us in a great position in case we get a hot/dry summer, plenty of water in reserve.

The highest quality fish (holdover & wild) have mostly come out of the permanent Catch & Release and downstream, but the best numbers have been upstream of that. Recently it's been a quality over quantity deal in the permanent C&R, with patient fisherman picking up some very nice trout. This will rapidly improve as the milder weather takes over, and soon (late April) that section will be well-stocked.

The most consistent flies upriver have been smaller nymphs such as Midge larva & pupa (black, olive, red, brown) in sizes #18-20, Frenchies #16-18, smaller Pheasant Tails & Hares Ears, flashy Attractor Nymphs, etc. Now is the time to fish "Junk Flies": Mops, San Juan Worms/Squirmies, Green Weenies, Egg Flies and bigger Stonefly nymphs #8-12 too. Hendrickson nymphs are active a good month plus before the hatch, so a #14 medium to dark brown nymph can be the ticket, especially for the holdover & wild browns.

Streamers can be very effective this time of year. Experiment with colors & retrieves to find what's best at any given moment (it changes). I would also try to make your presentations mostly slow & deep due to the cooler water temps, both swinging and slow retrieves are good choices. Experiment though, sometimes even in cold water the trout will respond to a fast retrieve, but overall in cooler water temps they like it slower. Early spring is a great time for slowly swinging streamers, it's a fun & relaxing way to fish and cover water both thoroughly and efficiently.


Posted by UpCountry Sportfishing at 9:20 AM