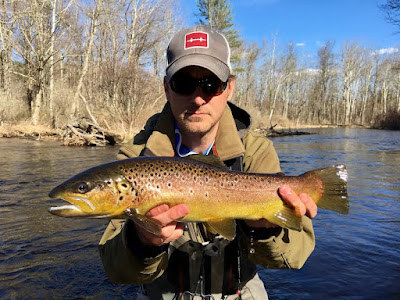 Derrick Kirkpatrick (of CT Fish Guides) with a solid holdover Farmington River Survivor Strain Brown Trout nymphed up during his "Busman's Holiday" this past weekend. Notice the clipped adipose, denoting it was stocked as a Two Year Old.

Total flow in the permanent Catch & Release (C&R/TMA) was reduced by 150cfs at 9am this morning- it is now a medium & beautiful 428cfs total in the permanent Catch & Release (C&R)/TMA and steadily dropping, with 265cfs below the dam in Riverton, and the Still River adding in 163cfs below the  Riverton Rt 20 bridge. They got the water level down where they needed at Colebrook Reservoir, so now they are back to a "normal" release. The inflow in New Boston, MA (above the reservoir) was down to 164cfs this morning. Not only does this flow reduction make the water level nicer for wading & fishing, but it will also help increase water temps- the water from the dam in Riverton has been low to mid 40s, and the Still River is probably in the 50s now. Less cold water mixed with water in the 50s means warmer & better water temps, and that means more bugs hatching and more active trout! It won't be long before Hendricksons are hatching...

The holdover trout are starting to wake up a bit this past week, getting more reports of nice holdovers & wild trout caught, and this should only improve this week. I would not say it's "lights out" yet, but definitely noticeably better than it has been in the permanent Catch & Release (C&R)/TMA. The stocked sections upstream and downstream continue to produce bigger numbers due to the freshly stocked fish that are also more active. Getting good reports from Riverton, all the way downstream to Collinsville.

There is more & more bug activity, with the bulk of it in the afternoons:  Baetis/Blue Wing Olives sz 16-18, Early Stones sz 12-16, Midges sz 20-26, and a few Paraleps/Blue Quills sz 18. I fished the permanent TMA/C&R Saturday after work, and I hit trout in some moderately fast water- water temp was about 49.5 degrees. I'm still guessing the last week of April will bring Hendricksons to the permanent C&R. FYI the Hendrickson nymphs are getting active subsurface and ending up in the drift, so a #12-14 brown nymph can be the ticket at moments. Most of the fishing is still subsurface & deep with nymphs, streamers, and soft-hackles/wet flies. Water temps in Riverton above the Still River are averaging low to mid 40's, the permanent C&R has been averaging mid to upper 40's- downstream in Collinsville/Unionville temps will be slightly warmer than that during sunny afternoons.

The most consistent flies upriver have been smaller nymphs such as Midge larva & pupa (black, olive, red, brown) in sizes #18-20, Frenchies #16-18, smaller Pheasant Tails & Hares Ears, flashy Attractor Nymphs, etc. Now is the time to fish "Junk Flies": Mops, San Juan Worms/Squirmies, Green Weenies, Egg Flies and bigger Stonefly nymphs #8-12 too. Hendrickson nymphs are active a good month plus before the hatch, so a #14 medium to dark brown nymph can be the ticket, especially for the holdover & wild browns in the permanent C&R/TMA and downstream. Also Caddis Larva, both uncased sz 12-16 & cased #10-14. Streamers can also be very effective in April, both on fresh stockers and also big holdovers/wilds. Experiment with colors & retrieves to find what's best at any given moment (it changes).
The highest quality fish (holdover & wild) have mostly come out of the permanent Catch & Release and downstream, but the best numbers have been upstream of that. Recently it's been a quality over quantity deal in the permanent C&R, with patient fisherman picking up some very nice trout. This will rapidly improve as the milder weather takes over, and soon (late April) that section will be well-stocked.
Posted by UpCountry Sportfishing at 9:21 AM