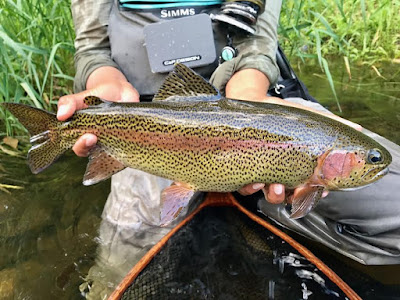 Wednesday I was out with my girlfriend Mandy, and right out of the box her big trout hand was strong, while I caught dinks, haha. At dusk the magic wand got transferred to me and I gave her a dose of the same medicine. Pictured is a holdover rainbow trout that looks like it could be an Alaskan Leopard Rainbow- look at all those spots, back to belly, even on the eyeballs! Nice fins & color too. While I prefer browns, we don't mind 'Bows when they look like that. Water temp in permanent TMA/Catch & Release was 59 degrees in the evening. We saw lots of #16-18 Sulfurs, along with other bugs, and although we did not have risers where we were, they were CHOWING #16 Sulfur-type nymphs subsurface. Some of the bigger/wider/slower pools are seeing good evening dry fly fishing, as evidenced by some good customer reports. FYI if popular pools are crowded, and they have been at moments, just fish the in between water, there are literally trout all over.

Cortland's "Top Secret" Ultra Premium Fluorocarbon Tippet is now in stock in 4x-7x. No hype or exaggeration, it literally is the world's best fluorocarbon tippet, hands down. Grady & I have both fished it now (I have several trips under my belt so far), and we both found it to be super strong, unusually flexible, holds & knots like a champ, very abrasion resistant, has excellent clarity, and just is an amazingly durable tippet. The combination of high break strength, stretch, and perfect plasma outer finish make it hard to break off fish & flies, and despite the slightly higher price tag, most using it report they go through it at about half the rate of normal tippet due to it's amazing durability.

The river is close to normal for today's date, clear & medium at 378cfs in the permanent Catch & Release area in BarkhamstedNew Hartford/Pleasant Valley (304cfs in Riverton, with an additional 74cfs from the Still River). Water temps are running mid 50's to low/mid 60's- coldest up near the dam in Riverton.

We are now in what I used to call "Crazy Time" when I worked at the Housy, there is quite a large assortment of bugs, depending upon exactly where you're standing. This week we've seen: Sulfurs #16-18 (Invaria & Dorothea), Cream Cahills #12, regular Cahills #14 (creamy yellow), still a few Vitreus #14-16, March Browns #10-12, Blue Wing Olives #22 (cloudy day/low light), Potomanthus #10, all sorts of Caddis from #14-22 (tan, olive/green, black, brown), and spinners of all the above mayflies. It can make it tough to figure out what they are eating, because it constantly changes throughout the day, and varies depending on how far below the dam you are! But it's a fun problem to solve. Look to the bigger/wider pools for your best shot at rising fish- Pipeline, Roberts, Whittemore, Mathie's Grove (School Bus, Spring Hole), Church, Greenwoods, the Wall, Town Bridge Pool, etc. Don't neglect terrestrials, ants & beetles are working. Remember that Riverton lags a few weeks behind the permanent C&R due to the colder water near the dam (and above the warmer flowing Still River). I don't have as good a handle on the hatches up there, Caddis #14-18 (olive/green & tan) for sure, some Vitreus #14-16, and quite possibly some #16 Invaria Sulfurs (if not now, than anytime soon). Van's, Canal & Beaver Pools would be your highest percentage to find rising trout.

Nymphers are still catching fish consistently, with some big ones mixed in. Streamers & wet flies/soft-hackles are working too- early, late, and/or cloudy moments have been best for streamers. When streamer fishing midday in the sun, look for shade & structure along the banks. During the daytime, nymphers are finding success using things like Caddis Pupa #14-18 (tan, olive-green), attractor/hot-spot nymphs #14-18 (Frenchies, Triples Threats, Egan's Red Dart, Rainbow, Warrior, etc.), Sulfur nymphs #16 (you can use a Pheasant Tail or a specific imitation), Stonefly nymphs #8-12 (brown, golden, black), and anything resembling a March Brown/Gray Fox in #10-14 (other than a specific imitation you can use a big Fox Squirrel or Hare's Ear). And the controversial Mop Fly continues to produce at moments too. It's a good "clean up" fly to use in a run after you fish it with your normal nymphs.