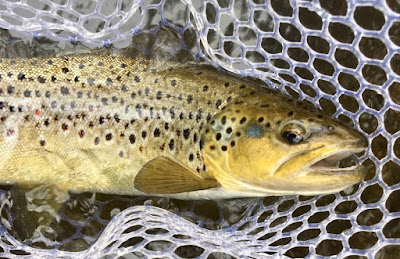 Check out this pretty blue cheek dot Farmington River female brown caught by customer Adam, it taped 17" plus and was either a wild or holdover fish. Sulfurs have become the main evening hatch in the permanent TMA/Catch & Release (C&R), Louis slayed 'em last night on the surface on Sulfurs, he saw both the #16 Invaria, as well as the #18 Dorothea.

MDC cut the dam release by 16cfs at 9am this morning. The river remains at a nice medium level and normal for today's date, and with the slight flow cut will be 346cfs in the permanent Catch & Release area in BarkhamstedNew Hartford/Pleasant Valley (about 302cfs in Riverton, with an additional 44cfs from the Still River). Water temps are running 50's to low/mid 60's- coldest up near the dam in Riverton.

Surface activity has picked up, especially in the evenings with Sulfurs (generally starting around 7pm and going until dark). So far they are upstream through the entire permanent C&R/TMA and up to Pipeline/Lyman Rock, but not up into Riverton (above the Still River). I've also gotten quite a few reports of some 11am Sulfur hatches- guess the bugs don't know when they are "supposed" to hatch..... Overcast days have seen small Blue Wing Olives (BWO's) hatching, about a #22. Also still a FEW #10-14 March Brown/Gray Fox sporadically hatching. Vitreus (aka the Pink Lady or Pink Cahill) #14-18 are moving upriver, and are into Riverton now, and getting lighter in permanent TMA/C&R (I'd look for them from about Campground & upriver). Caddis are still the dominant bug in Riverton (above the Still River), and we are still seeing plenty of Caddis throughout the river in the mornings & afternoons. Don't neglect terrestrials like ants & beetles, the late spring/summer air temps now here has them active, and those smart enough to use them are doing well midday when the surface action for others is slower.

Nymphers are still catching the most fish in the mornings & afternoons, with some big ones mixed in. Matt Baranowski landed a FAT 22" rainbow on a nymph Sunday, look for a pic of it soon on our UpCountry Facebook & Instagram pages. Streamers & wet flies/soft-hackles are working too- early, late, and/or cloudy moments have been best for streamers. When streamer fishing midday in the sun, look for shade & structure along the banks. During the daytime, nymphers are finding success using things like Caddis Pupa #14-18 (tan, olive-green), attractor/hot-spot nymphs #14-18 (Frenchies, Triples Threats, Egan's Red Dart, Rainbow, Warrior, etc.), Sulfur nymphs #16 (you can use a Pheasant Tail or a specific imitation), Stonefly nymphs #8-12 (brown, golden, black), and anything resembling a March Brown/Gray Fox in #10-14 (other than a specific imitation you can use a big Fox Squirrel or Hare's Ear). And the controversial Mop Fly continues to produce at moments too. It's a good "clean up" fly to use in a run after you fish it with your normal nymphs.