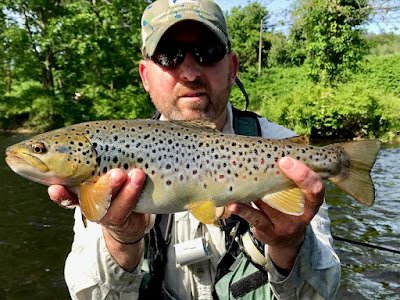 Yours truly (Torrey) pictured with a flawless brown I plucked out from a kill & grill spot outside the Catch & Release on Wednesday, from among a pile of stocked rainbows. It's amazing how many holdover & wild browns exist OUTSIDE of the TMA/C&R. Remember that on days when it's crowded. Most years I get my biggest brown trout in the open water where guys can catch & kill. Caught nymphing with a Caddis Pupa. Saw a good Sulfur hatch that evening around 7pm- not much rising where I was until it was almost dark, but they were smashing #16 Pheasant Tails/Sulfur Nymphs. Mandy & I picked up a lot of cookie-cutter fat stocker 'Bows in the 15-16" range, and they fought like little demons. Medium to fast broken water was where we did best nymphing, and the best hatching seemed to also be in riffly areas. No surprise there, as riffles harbor the most nymphs & larva.

Some good reports from customers during my last 2 days off, with nymphers still having the best/most consistent action, but some people doing well on top fishing to risers with Blue Wing Olives (BWO's) & Green Caddis. Louis continues to pound fish up to the surface blind-fishing Mini Chernobyls. The overcast weather through this weekend should be good for the hatches, especially BWO's. Farmington River is at a very nice level and about normal for mid June- a medium 357cfs in the permanent Catch & Release area in BarkhamstedNew Hartford/Pleasant Valley (318cfs in Riverton, with an additional 39cfs from the Still River). Water temps are running 50's to low/mid 60's- coldest up near the dam in Riverton.

Fish are rising at moments (especially in the evenings).  Terrestrials insects are now active, and we're getting good reports on ants & beetles. Of late the best dry fly action has typically been late afternoon until dark, with plenty of exceptions though- some days have seen late morning Sulfur hatches (guess the bugs don't read entomology books....). Nymphing remains by far the most consistent method, but all methods are working at moments. Streamers & wet flies/soft-hackles are both catching fish too- early, late, and/or cloudy moments have been best for streamers. When streamer fishing midday in the sun, look for shade & structure along the banks. During the daytime, nymphers are finding success using things like Caddis Pupa #14-18, attractor/hot-spot nymphs #14-18 (Frenchies, Triples Threats, Egan's Red Dart, Rainbow, Warrior, etc.), Sulfur nymphs #16 (you can use a Pheasant Tail or a specific imitation), Stonefly nymphs #8-12 (brown, golden, black), and anything resembling a March Brown/Gray Fox in #10-12 (other than a specific imitation you can use a big Fox Squirrel or Hare's Ear). And the controversial Mop Fly continues to produce at moments too. It's a good "clean up" fly to use in a run after you fish it with your normal nymphs.