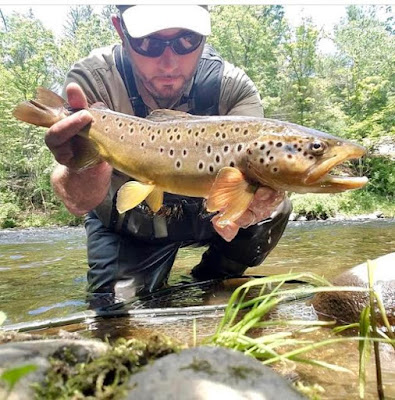 Zach St. Amand is one of those guides who fishes as much as possible, and as such he know the river in a way that few people do. Check out the cool spotting pattern on this really nice Farmington River brown trout. I dig the blue/gray cheek dot too. Quite a few large trout are being both landed & lost lately, and in all water types.

Farmington River is at a very nice level and about normal for mid June- a medium 380cfs & dropping in the permanent Catch & Release area in BarkhamstedNew Hartford/Pleasant Valley (314cfs in Riverton, with an additional 66cfs from the Still River).I would not be surprised to see the MDC cut the flow back a little today, maybe a reduction of 50-75cfs (educated guess), I'll update report if this happens. Lower flows = more rising trout.

Fish are rising at moments (especially in the evenings). The hot weather today & Tuesday will tend to push hatching to early and late in the day, so don't leave before dark! Temps go back to normal starting Wednesday. FYI the hot weather has terrestrials insects very active, and we're getting good reports on ants & beetles. Of late the best dry fly action has typically been late afternoon until dark, with plenty of exceptions though. Nymphing remains by far the most consistent method, but all methods are working at moments. Streamers & wet flies/soft-hackles are both catching fish too- early, late, and/or cloudy moments have been best for streamers. When streamer fishing midday in the sun, look for shade & structure along the banks. During the daytime, nymphers are finding success using things like Caddis Pupa #14-18, attractor/hot-spot nymphs #14-18 (Frenchies, Triples Threats, Egan's Red Dart, Rainbow, Warrior, etc.), Sulfur nymphs #16 (you can use a Pheasant Tail or a specific imitation), Stonefly nymphs #8-12 (brown, golden, black), and anything resembling a March Brown/Gray Fox in #10-12 (other than a specific imitation you can use a big Fox Squirrel or Hare's Ear). And the controversial Mop Fly continues to produce at moments too. It's a good "clean up" fly to use in a run after you fish it with your normal nymphs.