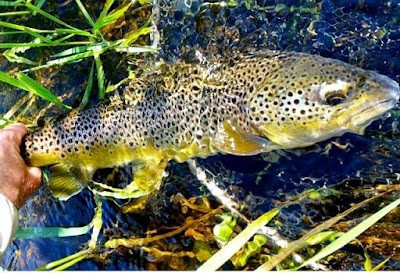 That's Andy Lyon's hand holding an absolute beauty of a brown, caught Euro nymphing on a small nymph. Andy consistenty puts up quality fish almost every time out, he's one of the best on this river, and he's been catching a lot of trout lately. Water levels here and hatches are both good here, with a mix of Caddis (tan, olive/green, black), Vitreus, Sulfurs, and March Browns. Caddis can be on the water at any point during the day, typically starting mid/late mornings, most of the mayflies are late afternoon to dark deals. Cloudy days have been seeing some Blue Wing Olives #18-22. If you see hatching & no risers, then go subsurface with nymphs, pupa, and soft-hackles/wets- don't always fish deep, as sometimes during hatching the trout will concentrate on the top foot or two of the water column if the food is concentrated there.

Unlike the Catskills and other areas in the northeast, the Farmington River is in very fishable shape- 451cfs & dropping in the permanent Catch & Release area in BarkhamstedNew Hartford/Pleasant Valley (318cfs in Riverton above the Still River). Fish are rising at moments (especially in the evenings). Of late the best dry fly action has been late afternoon until dark, which correlates to the bug activity/hatching- as the hot weather moves in Sunday through Tuesday, this will be even more true. Nymphing has been the most consistent & productive method of late, but all methods are working at moments. Streamers & wet flies/soft-hackles are both catching fish too. During the daytime, nymphers are finding success using things like Caddis Pupa #14-16, attractor/hot/spot nymphs #14-18 (Frenchies, Triples Threats, Egan's Red Dart, Rainbow, Warrior, etc.), Sulfur nymphs #16 (you can use a Pheasant Tail or a specific imitation), Stonefly nymphs #8-12 (brown, golden, black), and anything resembling a March Brown/Gray Fox in #10-12 (other than a specific imitation you can use a big Fox Squirrel or Hare's Ear).

If you are nymphing, look for the medium to fast broken water, and focus on edges/transitional zones: seams between fast/slow water, cut banks, rocks that break the current, drop-offs, spots where 2 or more currents converge together, etc.. You are looking for spots with good current that will deliver an above average amount of bugs to the trout, while at the same time providing a current break and overhead cover (this includes both objects they can hide under as well as a broken/ripply water surface that obscures them from predators like birds) and refuge from the current.The Prime Lies, where you have some depth/overhead cover, current bringing in food, and also a current break, will typically hold the biggest trout as they will use their size to dominate the most desirable spots.

Sulfurs #16, Vitreus #14-16 (Pink Lady/Pink Cahill/Pink Sulfur) & #10-14 March Browns/Gray Fox are all hatching now on top of the olive/green and tan bodied Caddis #14-18 (both with tannish wings) we've been seeing the past 2 weeks. Caddis are all up & down the river, and the Sulfurs, March Browns & Vitreus are at least as far up as the top of the permanent Catch & Release (C&R)/TMA and up to Pipeline, but NOT as far as Riverton (upper 2 miles above the Still River to the dam, basically Rt 20 Hitchcock bridge up)- the water from the dam is cold so hatches happen weeks later up there. FYI all Caddis look tan in the air, so make sure to capture one before you make a decision on the body color. If you cannot grab one, then look for spider webs that have Caddis stuck in them. Trout can sometimes get very specific on body color when it comes to Caddis. FYI the Vitreus are an Epeorus species, just like the Quill Gordon- they have only 2 tails, and the duns hatch out of the nymph near the stream bottom and swim to the surface, making flies like a Partridge & Orange a good choice to swing during the hatch.